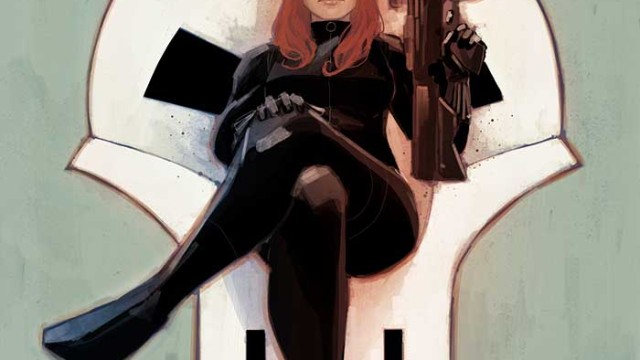 Natasha’s investigation into Chaos has been slowed to a crawl in this latest installment. Despite, quick action and fight scenes at the beginning and promised Punisher making his big entrance, just like in life, seemingly nothing actually is accomplished.

Tracking a signal to an almost ghost-like boat that should not exist, Natasha seems more caught by surprise and emotion than the knowledgeable spy she has been shown to be in the past. There is a single fight scene at the beginning and another page of quick thinking, while the rest of the issue is filled with talking heads, though they are beautifully rendered. If there was necessary exposition revealed to readers who had not been keeping up with the series or  genuine reveals all this back and forth would be understood. Instead, Edmondson has both Black Widow and Punisher show some uncharacteristic discussion. Natasha acts as if she’s never dealt with or had to question a truly innocent man caught in the middle of a mad, villainous scheme. It could be argued that she is under stress from the loss of her assistant and friend, so she is just wanting to work as quickly as possible. However, one of her admirable features is that when the moment counts she does not let these things get to her, so she can save the day. Perhaps more meaningful exchanges or dialogue would have sold the premise of an overly angered Black Widow more, had it not been The Punisher of all cameos, for her to have an exchange with. It was just enough to personally take me out of the story and scratch my head. Also, another Avenger makes an appearance with lines that feel like they have been said so often in both the movies and comics that, to me, it comes across as cliché.

Once again Noto’s art sells every other aspect of this book transporting you to the middle of the ocean as well as back to S.H.I.E.L.D. headquarters. His ability to take different points of view during conversations without crossing potentially awkward planes of view helps to keep the conversation fresh and interesting. There are few clever uses of Natasha’s attack device that help to make the fight scene jump off the page. The color palette change from outside the boat, to inside, and various other locations really helped keep the pace for the rest of the story aspects and sell where you have been taken.

Despite the interesting ongoing story, this issue feels like an unnecessary way-point with almost zero effect on what will happen next. Which is fine for a fun read for those looking for a little spy-thrill. The final reveal pages does exactly what it should in making you want to read what is next. With that being the case, if your budget is tight I’d go ahead and say wait for next month and see what is around the corner for Black Widow.