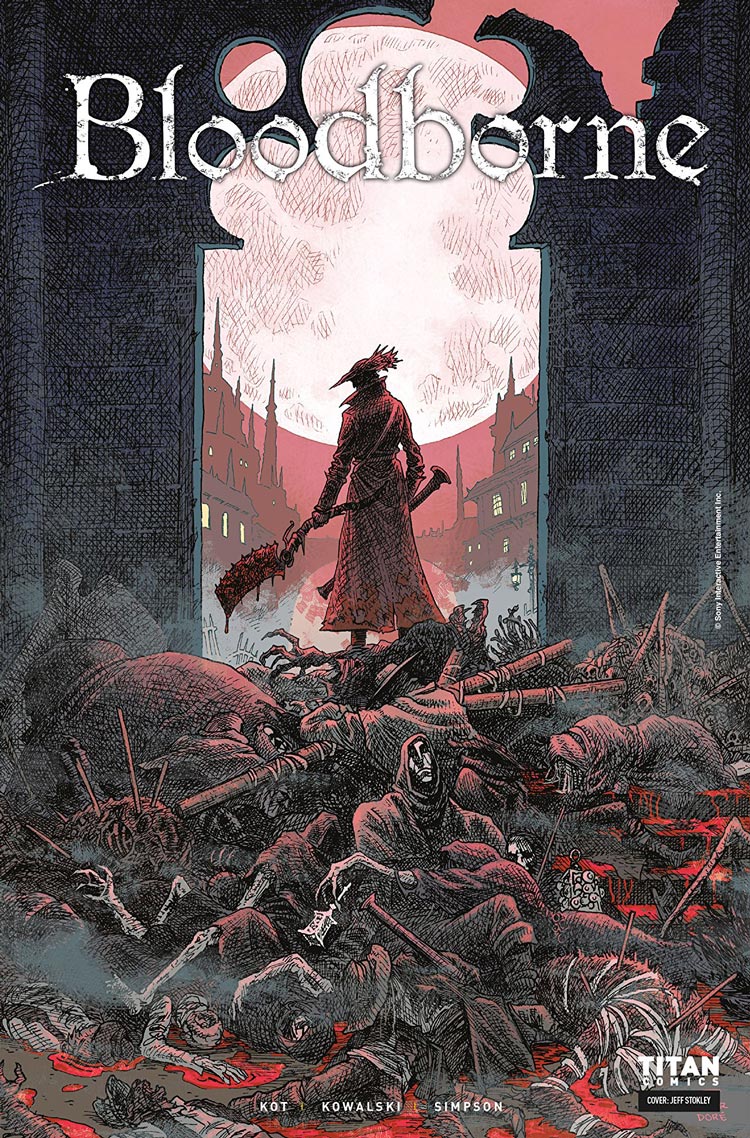 The announcement that Ales Kot would be writing a Bloodborne comic likely left a good number of fans scratching their heads. Kot is mostly known for their outspoken media presence and trippy yet political stream-of-consciousness works, not exactly the type of creator you usually see pop up on tie-in comics to video game franchises.

But on top of being a vocal Bloodborne fanatic, Kot is a writer who loves to explore people trying to escape from dangerous cycles, a theme that defines Bloodborne as well as its kin, the Souls series.

Bloodborne is the story of a “hunter,” a member of an mysterious group tasked with exterminating malicious supernatural creatures, who finds himself in the plague-ridden city of Yharnam. Kot opens the comic with the question “Does the nightmare ever end?,” a reasonable query given the hellish landscape Piotr Kowalski has illustrated the hunter walking into. The sky seems to be on fire, bodies are piled in the street, smoldering while the plague “survivors” surround the hunter, seemingly eager to feast on the hunter.

The script proceeds to play out like a grizzled monster hunter dialogue at first. Statements like “This is not my first time. I’ve been here before” could simply be the resignation of a veteran investigator, an indication that this world is full of these horrors and this is a normal workday. But there are also the vague remarks about being “awake” again, of remembering these exact creatures, this same fight.

Whether you’ve played Bloodborne the game or not, these statements probably aren’t too dissimilar to things you’ve muttered to yourself while playing any modern game. In video games, death is never really permanent and fights are a language all their own, as repetitious as small talk and often as predictable. Hardcore gamers even commit to the grind, the practice of repeating identical tasks and battles in order to level up a character for the harder, more unique fights to come.

What makes the work of Bloodborne’s developer From Software so unique — and likely so appealing to a writer like Kot — is their willingness to engage with this cycle in novel and clever ways. Bloodborne’s predecessors in the Souls franchise utilized concepts like letting you view the “ghosts” of other players’ characters so you could witness how they fought and died and perhaps learn from their triumphs and mistakes. And on a metatextual level, From Software’s games all ask you to confront why you play. Is it for the challenge? For the loot? For some grander cause?

For most From devotees, that grander cause is the narrative itself, which is mostly locked away and abstract. The real story is not playing out in a linear fashion in front of you, but through the secrets you only uncover by pushing yourself to play harder and better, to unlock secret content — some of which is only being found now, several years after the release of the entries.

Bloodborne takes that even further by making the player perpetually question what is the game’s reality and what is its nightmare. Halfway through the first issue of the comic, the protagonist squares off against a giant plaguebeast and dies a horrifying death while the child who may have provided answers about what was real looks on not in terror but in disappointment. This isn’t a spoiler, this is simply what always happens in Bloodborne because this is a game where the only way to really progress is by dying, over and over and over.

This death brings the hunter to a realm called The Hunter’s Dream, seemingly populated only by a wheelchair-bound old man and a pale porcelain doll of a woman. Here, there is no sky of fire, no plague beasts, only tranquility, with Brad Simpson’s color palette shifting to a scheme closer to Melancholia than the fire and brimstone tones of the Mignolaverse. The two figures tell the hunter that the only way to stay in this place is to return to the “night of the hunt” and “seek paleblood to transcend the hunt.”

And so the hunter returns, fighting the exact same fights once more, now in black and white, returning to the cathedral where other hunters attempt to cleanse the city and guard that mute child with pale blood coursing through his veins. Only this time, the hunter avoids the creature that struck him down, a decision that notably deviates from the game’s core philosophy of fighting and dying and fighting again.

There will, of course, likely be other fights but Kot wisely puts their stamp on the material by asking if the way to break Bloodborne’s cycles (and perhaps our own real world cycles) is to walk away from fights that aren’t necessary. Kot could have scripted a comic that was all visceral action and grotesque death, and in Kowalski’s talented hands it would have almost certainly been a pulse pounding sight to behold. But instead, this creative team skews ponderous, channeling that exhaustion so many of us collectively possess now as we watch the same horrors mount, day after day, knowing that many of them, like the mass shooting epidemic, are a nightmare we could so easily wake from if the right steps were taken.

Instead, like the hunter, we’re doomed to repeat history, attempting to apply what we can from each failure in the grim hope that the cycle will break before we’re permanently sleeping. One doesn’t usually expect a licensed comic to provoke these kinds of thoughts, let alone to look so beautiful and melancholy while doing so.

But Kot and Kowalski are not traditional creators and their connection to this material is clear, which in turn makes its resonance more profound. Bloodborne is not only an excellent addition to the franchise it adapts but to the ouevre of the creators involved. Perhaps more licensed comics will follow its own example and do their part to break the cycle of mediocrity that normally plagues comic adaptations of games.