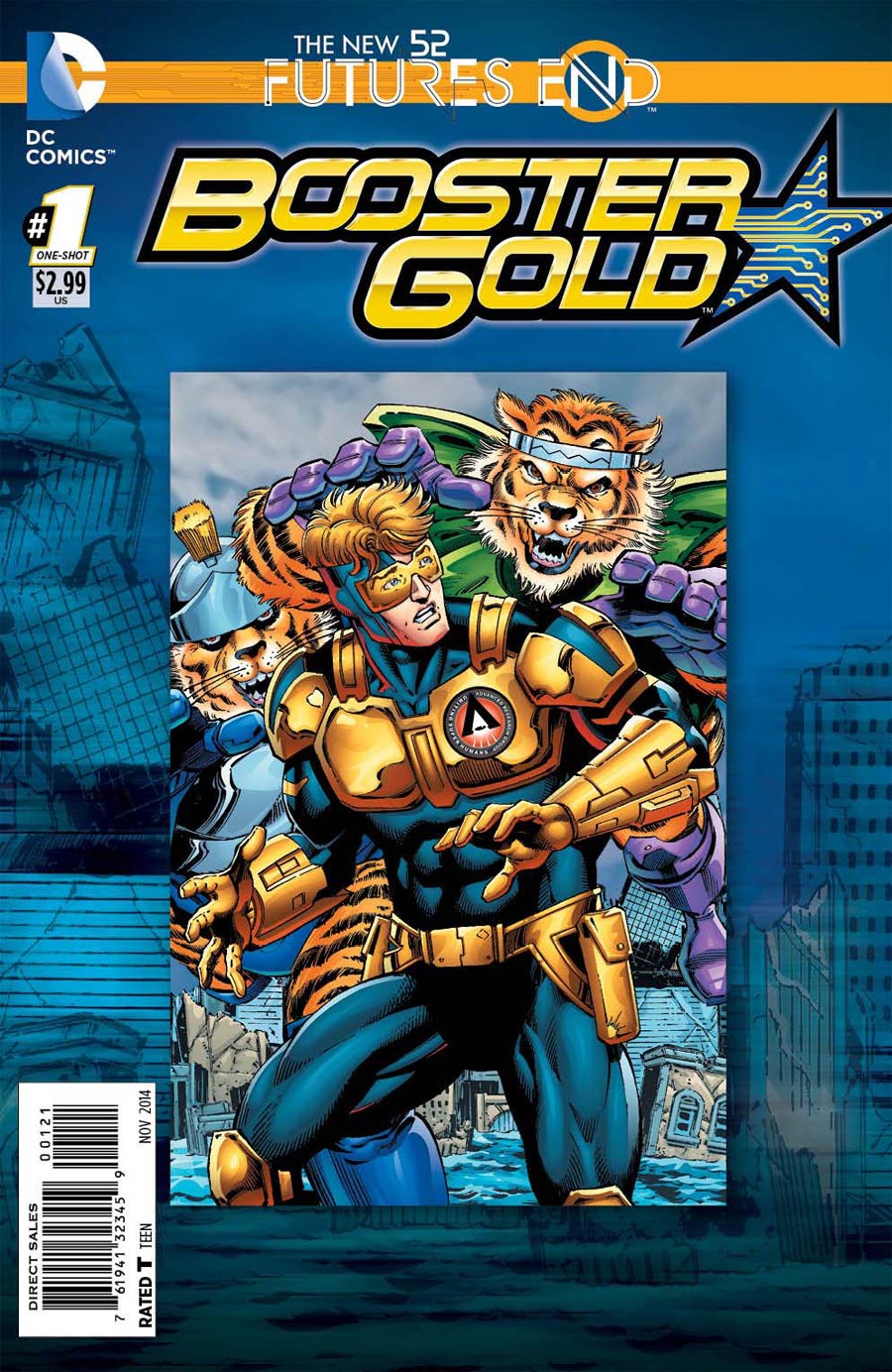 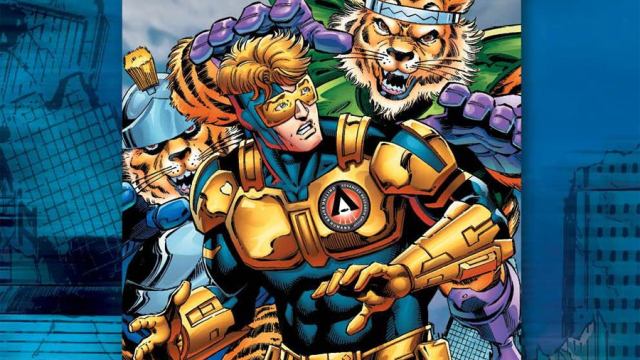 There is no conceivable way I can do this issue justice with a spoiler-free review, so let’s just say upfront…

And secrets. And joy. And confusion.

Yes. Booster Gold is a very integral character, it seems — in every sense of that word. Bouncing around not time, not space, but the Multiverse itself, we encounter a Booster Gold that’s a bit older, more experienced, and vaguely more familiar than the one we first met in The New 52. And wouldn’t you know it… that’s because we’ve known him all along. Jumping from Earth 19 and the Legion of Super-Heroes’ Earth (yes, it seems pretty clear now that they have their own Earth in the Multiverse) to Earth 4 and Earth 51, this is Michael Jon Carter, who partnered with the Time Master Rip Hunter, and lived in the timeline we now call… the pre-New 52.

What’s great about this issue is that it opens up as many questions (if not more) than it answers. Where did each version (oh yes, there’s more than one) of Booster come directly from? How did he get pulled across the Multiverse? What does A.R.G.U.S. have to do with all of this?

But at the same time, we’re getting a lot of clarity, both here and in Superman: Doomed #2, as to who the ultimate big bad of the next year really is. And he’s been there the entire time in one form or another. And oddly enough, it isn’t Darkseid! Suddenly, who the Anti-Monitor works for, who reprogrammed Brother Eye… it all falls into place, and secrets are laid bare. But not without leaving behind a bunch more.

Jurgens’ characterization of Booster couldn’t be more spot-on, and with good reason. It’s almost embarrassing to even write that line, actually, as Jurgens not only is one of the architects behind Futures End and the writer who last wrote Booster Gold’s ongoing (from which he can presume one of these versions jumped pretty quickly out of to these pages) and Justice League International, but he’s also Booster’s creator from as far back as 1985. So, even with a more experienced version of the character, one who’s been there and back and found his legitimacy, we get a nice sense of his charm and depth that we didn’t get to see as much in the recent JLI run. It’s fun and gives me a real sense of hope for the character.

The art is a bit of a mixed bag, as books that use multiple teams usually are. Moritat’s delivery of Booster amid the Gotham by Gaslight world is not as stunning as his All-Star Western issues featuring the time-travelling hero, but they evoke a certain mood. Brett Booth’s pages reintroducing an old friend are quite stunning, as are Stephen Thompson’s, set on Earth 4. Ron Frenz captures the energy of Kirby in his Kamandi-related pages, although Booster himself looks drastically out of place. But in a sense, that’s probably right on. That’s not his future, after all.

Ultimately, Jurgens himself delivers the strongest pages, tying everything nicely up and bringing the character home in every sense of the word. Booster Gold: Futures End #1 is a keystone book for what’s to come in the next six months (and beyond) at DC Comics, but it’s also just a nice return to a multitude of ideas a lot of fans have been dying to see. It’s finally time.

There are no less than three Booster Golds now running around the DC Multiverse. Where were they last and where will they pop up next? 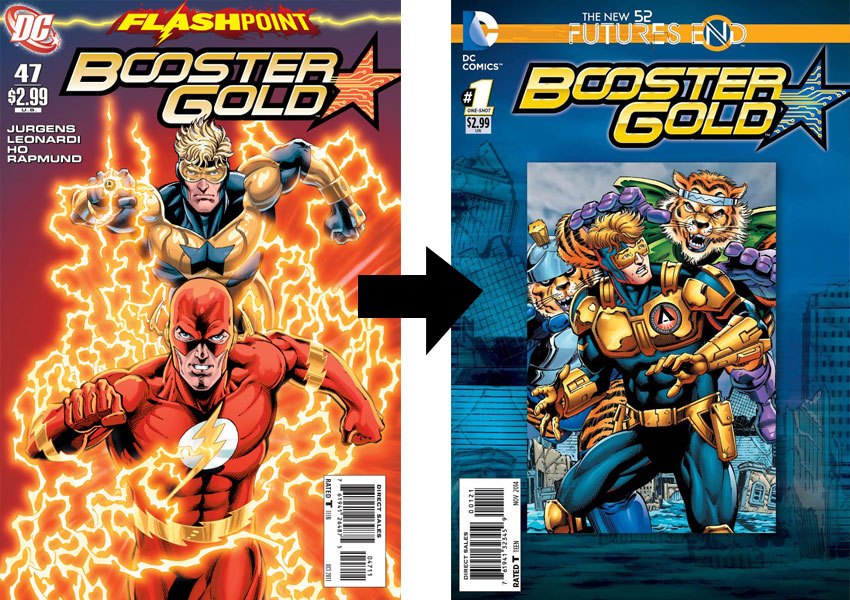 Booster #1 (featured on one of the lenticular images of this special) comes straight from the pre-New 52 universe, but post-Flashpoint. 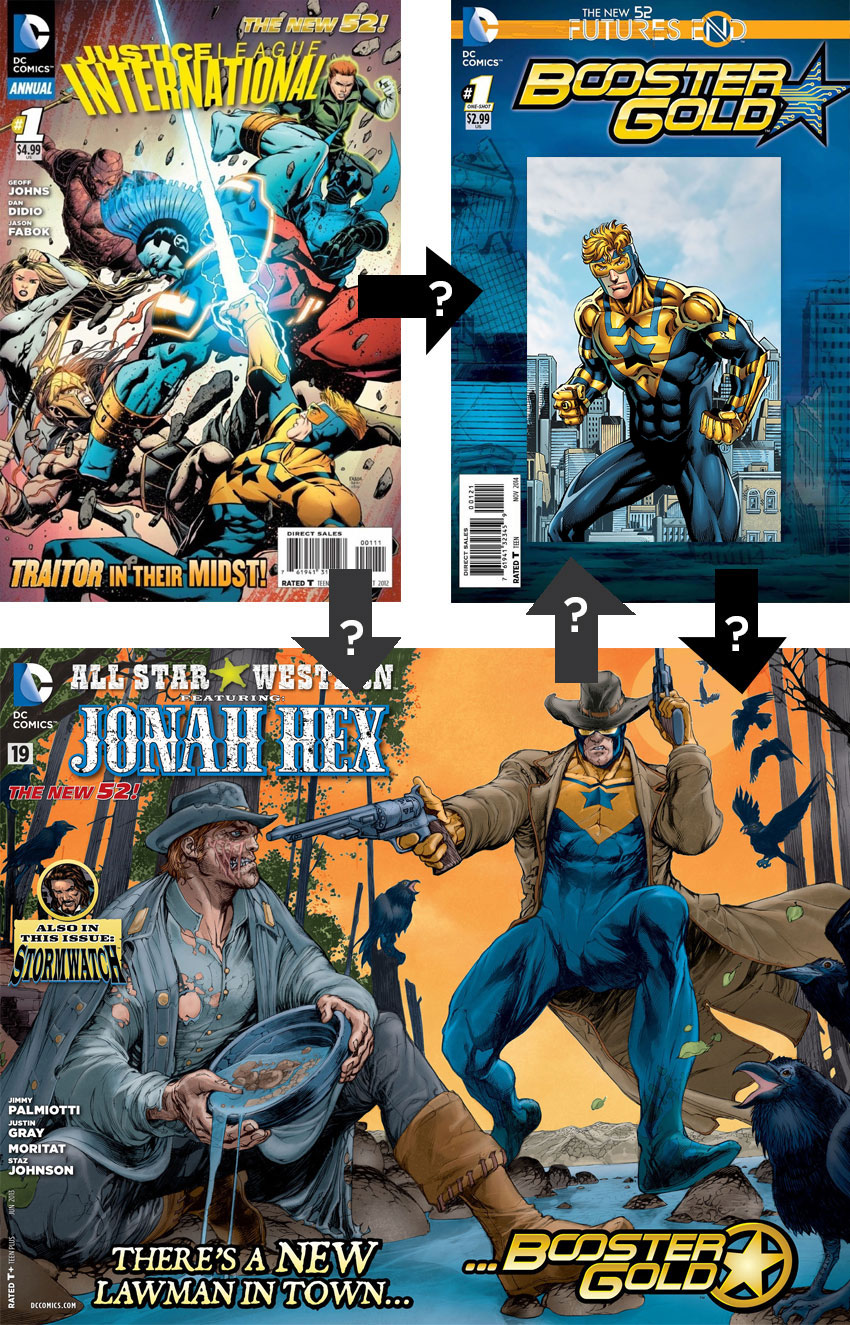 Booster #2 (who appears on the other lenticular images of this special) may have come directly from Justice League International Annual #1, or he may have bounced to his time with the New 52 Jonah Hex first. Time will tell. 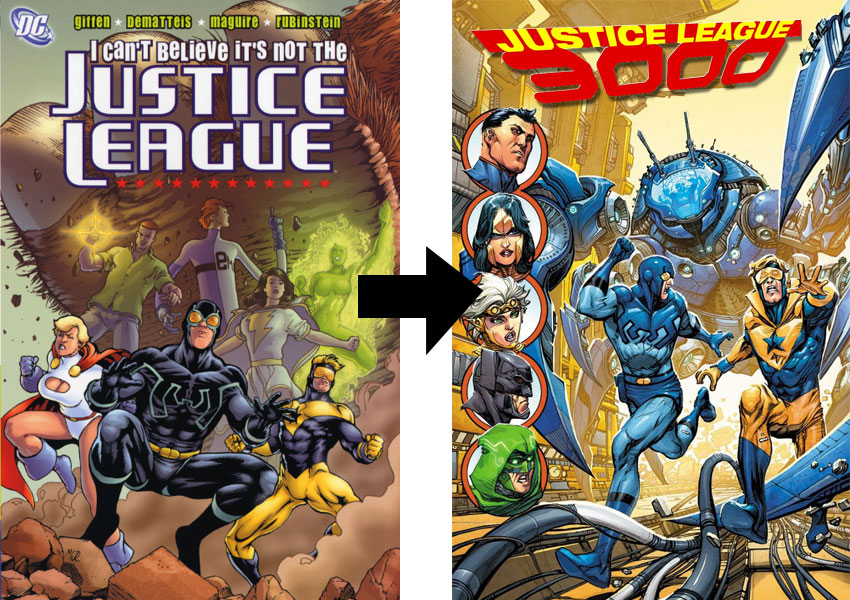 And then there’s Booster #1.5, who is going to be unfrozen in the year 3000 this December. According to writer Keith Giffen, he comes from the conclusion of “I Can’t Believe It’s Not the Justice League” — and an Earth in the Multiverse where Ted Kord was never shot by Maxwell Lord. Imagine that!