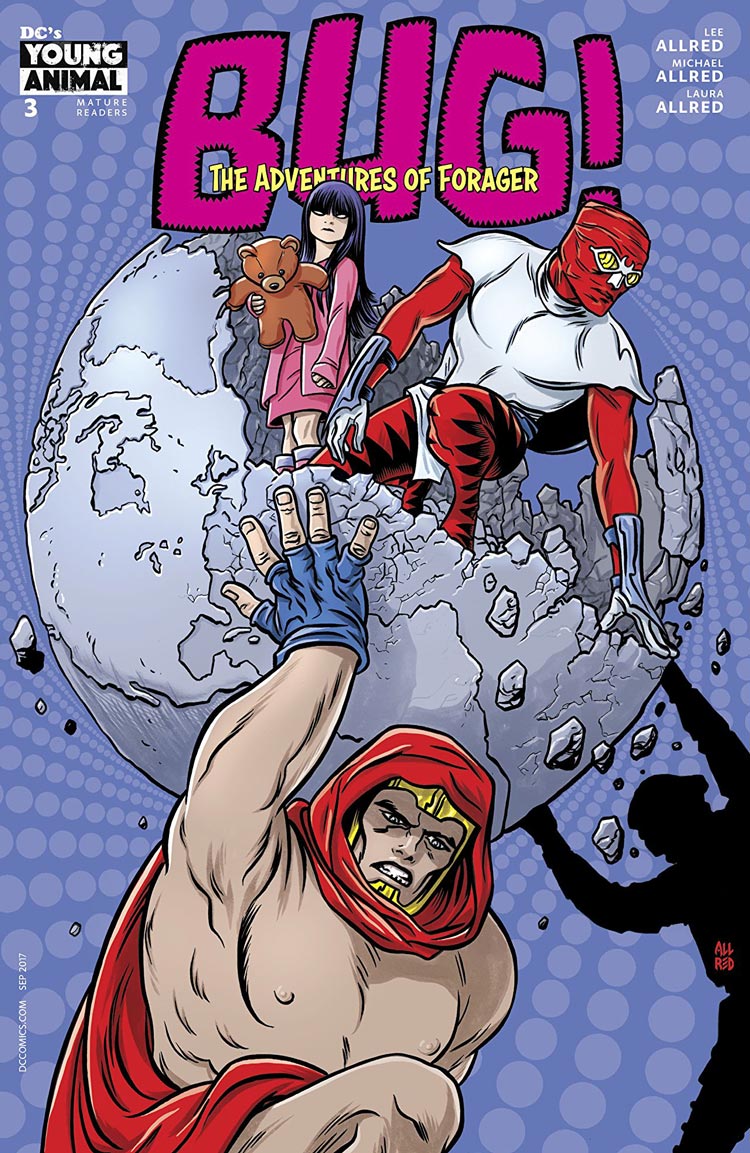 Thrust through another portal, the Forager finds more danger lurking in his destiny. But will everything truly go as determined by the mysterious teddy bear Kuzuko carries? Find out in this latest issue of Bug! The Adventures of Forager!

The Allred brothers do a great job in establishing the rules of their dimension and time hopping tale. I like that they do try to shed some light into the hows and whats, try to provide the possibilities and the probabilities. Wibbly wobbly, timey wimey stories are hard to write without making a jumbled mess of the logic of it all and it’s nice that they tried to take that into consideration and put the effort into explaining what’s happening.

I also love the humor that they bring to the table. Forager is becoming one of my favorite characters at the moment and it’s because of his weirdly cheeky reactions to the situations he’s placed in. I mean, yeah, he’s a new god raised by a bug people society, so I guess whatever he sees on earth won’t exactly be that crazy, but his more annoyed than anything attitude towards everything juxtaposes well with the seriousness of the other characters.

The art in this comic is fantastic. It harkens back to a more retro, early comics style and fits well with how the Forager hops between lesser-known scenes in older comics. It almost gives the comic this timelessness, displaced, and I think that goes well with the overall plot of the comic. I also love the musical yak. I really hope that yak comes back. That yak is so great.

I’d say one of the best things about the comic is the lettering job by Piekos. I like how his lettering gives Kuzuko this personality that her stoic face won’t portray. I love how all the word bubbles besides the teddy bear’s are normal and that the teddy bear has this strange, aubergine kind of color to it. It adds a layer to the mystery of the teddy bear and what exactly the creature possessing it truly is.

Oh my gosh, read this. Read it like now. It’s a really well-written comic and the style stands out amongst those out at the moment. It’s an awesome series that more people should be reading.