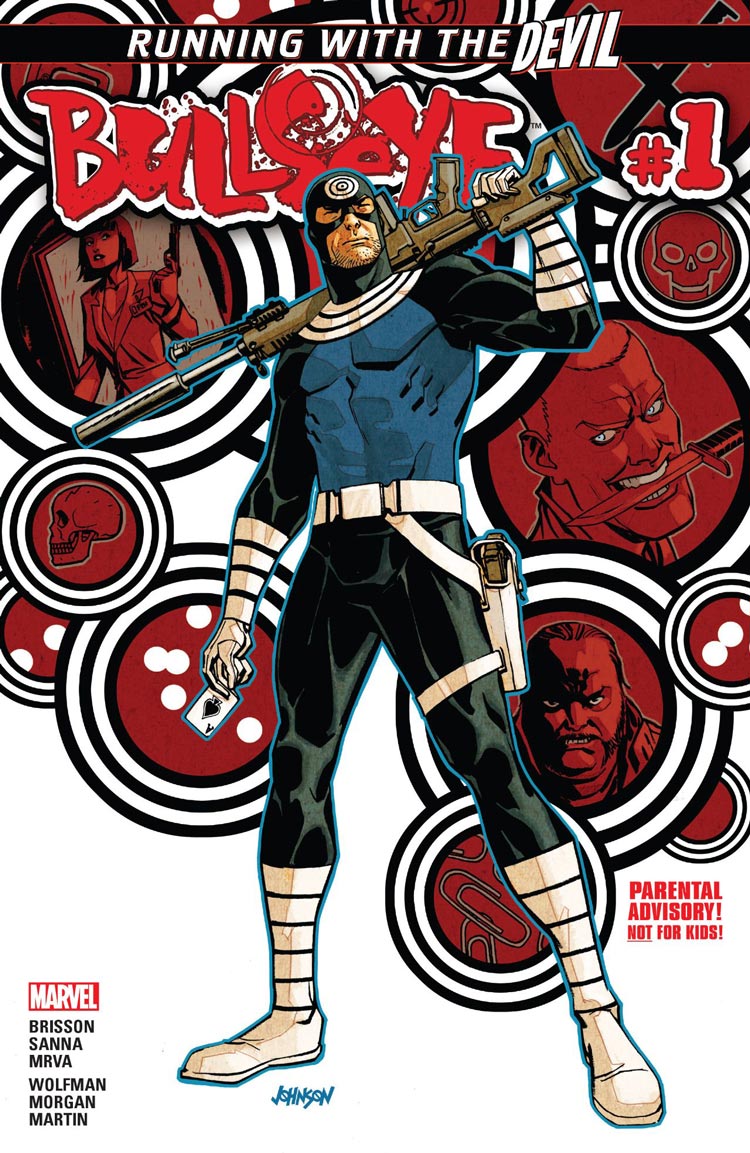 Snitches get far more than stitches.

After handling one job, he’s looking for another and he wants it to be big. He gets a lead on a Colombian cartel and figures he can carve up some money and some people. Not one to hide, Bullseye makes sure his mark knows what’s coming. Elsewhere, Bullseye tries to keep a secret, and the people torturing him have a decision to make.

Bullseye #1 makes good use of the main story and its backup, showcasing two sides of the man with the mark. In Ed Brisson, Guillermo Sanna, Miroslav Mrva, and Clayton Cowles’ “The Colombian Connection,” we get a psychopath who gets a kick out of causing chaos with paperclips. Innocent images aside, he showcases his talent for accuracy by dispatching people on the street as he talks to his lead.

This scene demonstrates just how little Bullseye cares for others around him. After coming back from the dead, he pretty indiscriminately wants blood. Brisson’s writing casts the main character as someone you don’t want to cross, whether on the street or in an argument. I like this Bullseye because he’s an interesting kind of villain, one dedicated to destruction for no damn good reason. Yet, this erratic characterization is also somewhat jarring, and I wonder how it fits into his overall story.

Sanna’s art is messy, matching the discord that seems to live around Bullseye everywhere he goes. The jumbled lines and distorted faces create a dark and sinister mood, even in the most calm scenes. In other places, Sanna uses a nondescript style that fits Bullseye’s own desire to make trouble, even for people he doesn’t know and doesn’t care about. The effect of the mass street murder makes him much more threatening through these panels which emphasize the violence enacted on complete strangers, who have no real presence besides being victim to the slaughter.

Mrva does great by adding emphasis and brightness in the right places. There are effects that make the story feel as though its events could happen every day, minus a massive pedestrian pile-up because of deadly errant paperclips. Mrva uses colors to cast the story in darkness, while trading these for vibrant scenes for important impact.

Marv Wolfman, Alec Morgan, and Frank Martin’s backup is much more subdued. Wolfman gets the buildup and writes a clever mercenary who makes good on his promises. The tables seem turned for our protagonist, until he shows that he means exactly what he says. Morgan crafts an excellent action scene and enhances tension with grimy characters. Martin adds to these effects with eerie colors that are perfect for mobster negotiations, capturing an ironic excitement with cool colors and sinister calm with dulled yellows and oranges.

With Bullseye, what you see is what you get. This story fits the character and his position within the Marvel universe, right down to wanton killing and deadly aim. The first issue was about what I expected and was executed well. I’m not sure what’s down the line, or how long Bullseye will be able to hold down a title, but it at least delivers exactly what it needed to, no holds barred.