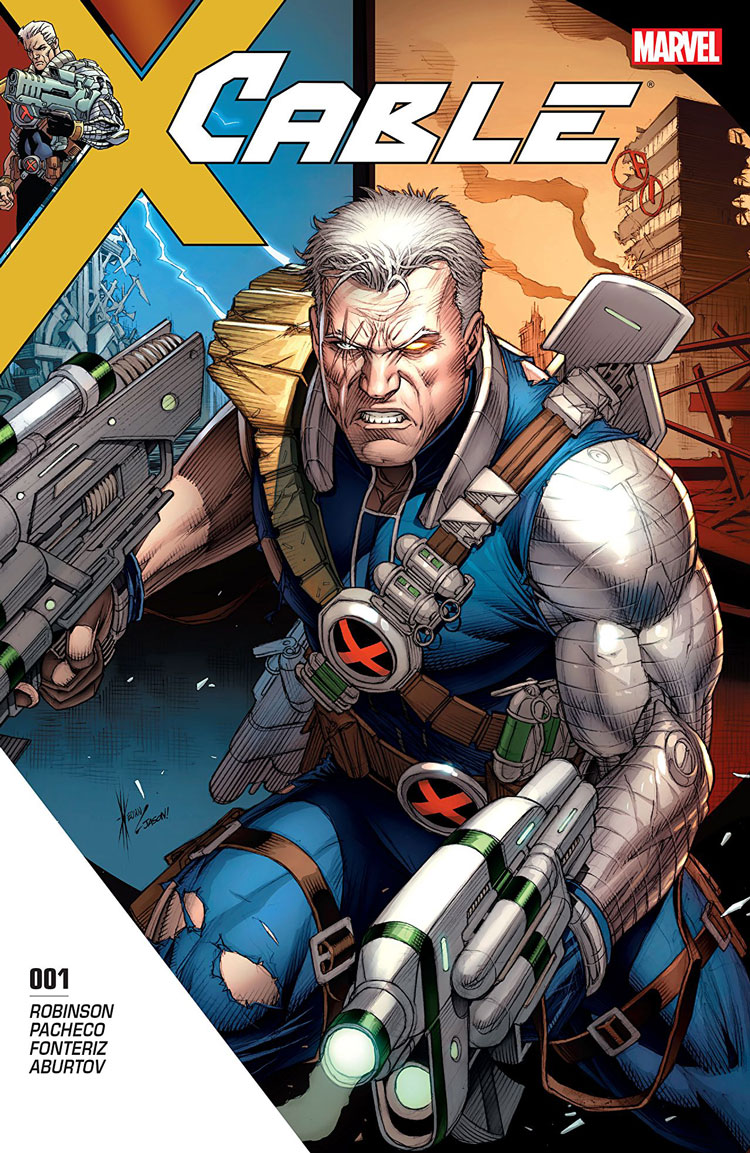 I honestly cannot recall a time that I was anticipating an X-Men related comic book as much as I have been Cable #1. The crazy part about all of that is the fact that I have never paid cash money for a comic with “Cable” in the title. The time-tossed mutant factored heavily into the Avengers: X-Sanction story from a few years back, but that was a planned mini-series, and there were Avengers involved.

Cable #1 is Cable. That’s it. Sure, it’s part of the ResurrXion event, but it’s not X-Men: Cable. It’s Cable, written by James Robinson and drawn by Carlos Pacheco (who, by the way draws the pips on a set of playing cards). Cable #1 is inked by Rafael Fonteriz, colored by Jesus Aburtov, and lettered by Cory Petit. This is chapter one of a tale dubbed “Conquest.”

So there you have it: a character I know of, but haven’t cared about coupled with some of my favorite comic book creators. And that’s where my anticipation comes from. The possibility of the known and the unknown. The promise of X-Men stories of yore coupled with creators from some of the most revered comic book tales ever. Possibilities. Options for adventure. Or just adventure.

So how does it stack up?

Back when I managed a team of graphic designers, I lived by the creed of, “Work fills the time allotted.” Give a team of designers two hours, and they’ll work for two very solid hours. Give them two weeks, and the work gets done in thirteen days, eleven hours, and fifty-odd minutes. Time is both a luxury and a competitor.

Robinson has the luxury of time and space, at least for this opening arc, to give readers a simmer before bringing his story to a boil. This is a standard-issue, twenty-page debut. There’s no back matter, no text pages, no additional director’s cut material. This is just twenty pages of comic book story. And Cable’s not even on all twenty of them.

Robinson brings Cable into the story in a saloon in Nobileen, Arizona, in 1874, throwing open the saloon doors and bellowing: “No need for introductions.”

Robinson sets the competition up, Cable on one side, some gunslingers on the next, breaks for the creator credits, and returns to the aftermath of the fight. Cinematically framed, smartly paced, and wonderfully executed. From there, you’re either with Cable or against him, and he’s fine with your decision either way.

Pacheco could not be better matched for all of this: Robinson’s pacing, the Old West setting, or the Clint Eastwood machismo Cable wields almost as effectively as his guns, blades, and fists. I already mentioned that Pacheco opted to draw the pips on the faces of the cards (something that could be so easily rendered by computer), but he doesn’t stop there. Every person, whether they’re a plot point, suffering from a terminal case of lead poisoning, or Cable himself has a different physique. Each has a different profile, and unique array of expressions. As different as the eight of spades from the ace of hearts, Itaru commands his own panel space just as Cable does.

Itaru’s tale takes Cable to Nippon, Japan, in 1543, which Pacheco draws as capably as the Old West, and Cable’s far-flung futuristic tech. Fonteriz follows Pacheco’s lead, adding more textures than shadows, enhancing lines instead of thickening them, but every choice he makes melds nicely with the drawings Pacheco gives us in Cable #1. And all of it is magnificently, meticulously committed to the page.

As Fonteriz and Pacheco do, so do Aburtov and Petit, swapping colors, text, and line, enhancing the story, layering the adventure. The skies of Japan sit on the far side of the color wheel from the opening scene in Arizona. The shadows cool off Cable’s uniform, and the mutant manhunter’s enhanced vision brightens up the landscape as the heads-up display informs readers of the surroundings. The dialog tucks neatly into calmer spots of Pacheco’s art, and Aburtov provides color landing platforms for every one of them.

Through it all, Cable #1 gives readers a page-turning adventure. Cable is tracking someone down, and we’re going with him on this journey. He doesn’t waste time telling us things in caption boxes, because what’s important is what he’s after, not where he’s been or who he is. The story isn’t solved in twenty pages, but readers are given enough to be intrigued and hooked. Cable on the final page of Cable #1 is vastly different than when we first meet him in this comic book, and the creative team leaves us with a cliffhanger that has me counting days until the next.

So, how does Cable #1 stack up to my expectations? It doesn’t. It exceeds them, giving me a comic that made me a Cable fan. I look forward to being a fan for a long time to come.