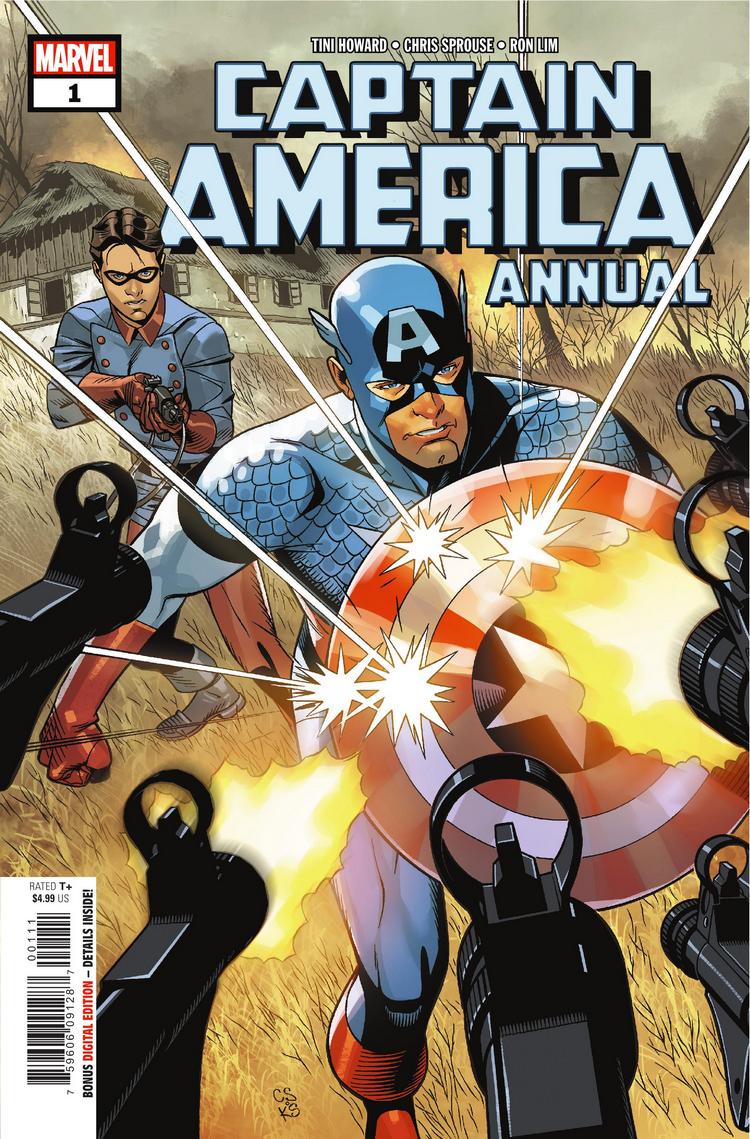 “Ziegenfarm” takes readers back to WWII with Captain America and Bucky behind enemy lines, doing the things that Cap and Bucky do. It is a tale that serves as a reminder of what blatant facism looks like, and in that manner it hits like a punch to the stomach because of the realization of how close to home it hits today.

Howard writes this issue brilliantly, operating in layers at all times. At the surface, we’ve got a story of Cap and Buck in their element, rescuing people fleeing a concentration camp and punching Nazis. Howard captures the tone of their dialogue perfectly, giving readers that 1940’s Captain America stoic attitude to do what’s right. He and Bucky emanate Western pride, the desire to defeat the enemy and restore freedom to people who have been oppressed by the facism of the Nazis.

As this story progresses, we find there is more to this than just punching Nazis. Howard is also telling the stories of those often unheard of or overlooked in superhero comics. The story of people persecuted because of their sexuality, their culture, their birthplace and their religion. This comic is about so much more than white men in blue costumes punching white men in grey costumes. This comic deals with issues of persecution that transcend time – Howard isn’t just talking about the 40s here – and she writes this in such a way that the story doesn’t feel burdened by too many layers. The stories being told here serve to preserve history and also act as a warning – as a call to wake up and look around. This same shit is happening today, 78 years later and it is up to people to hold the line, there’s no Steve Rogers here to hold the shield. This is deftly executed writing here, folks, as Howard tells a contained one-shot tale that has lots of action and nuanced, developed story layers in 34 pages.

Comics is an amazing medium where sometimes the right story is told by a creative team that is completely in sync and 100% up to the challenge of making the story something impactful and special. I’ve raved about Tini Howard’s writing, it’s obvious that she held up her end of the bargain in my eyes. Well, so did Chris Sprouse, Ron Lim, Karl Story, Walden Wong, Scott Hanna, Jesus Aburtov, Erick Arciniega, Israel Silva, and Joe Caramagna. This oversized annual is a throwback feast for the eyes that reads like the best moments of Captain America’s storied history condensed into one perfect WWII tale. Sprouse captures “classic” Cap absolutely brilliantly. His All-American-Super-Soldier-Stand-Up-Regular-Joe look is startlingly on point in this issue, he’s simply a beacon of decency. Sprouse captures the enthusiasm of Cap and Bucky to “do right” so well. It is in every muscle of these characters. They are there to help people who need help and by god their body language even shows that. At this point in his career, readers know Chris Sprouse can pencil a fantastic story, but damn…he was meant to bring this story to life. Style and subject matter have converged here to make something that is truly magic.

With three inkers and three colourists chipping in to help with this oversized annual, I was impressed with how well it flowed. Anyone who’s read a comic with that many creators listed that doesn’t go right knows the train wreck that can occur – where you’ve got so many styles going on and conflicting that the narrative gets lost, but that is not the case here. I truly don’t know who did what. The artwork is that seamless, which is saying something.

The colour palette used by Aburtov, Arciniega and Silva sets the tone very well. This is not a dark, shadowy 1940 like has been published so often in the past, but rather a brighter, buoyant take where Cap and Bucky explode from the page, visually. The blues are bright and the main duo look like the beacons of hope they are acting as in the issue, which gave the story a very positive feeling overall. Their work added to the “classic” feel of this comic, like they paid tribute to the original colour choices for Cap and Bucky stories, but with modern style and precision.

Captain America Annual #1 is an impressive read, skillfully crafted by talented creators. This is the kind of story where Captain America and the unique medium of comics can say so much while working within the framework of Super Soldiers and their sidekicks. Howard, Sprouse, Lim, Story, Wong, Hanna, Aburtov Arciniega, Silva and Caramagna have told a special story here. This isn’t the kind of Annual that should be ignored or skipped, and I hope to see more of this kind of content in one-shot issues like this in the future.