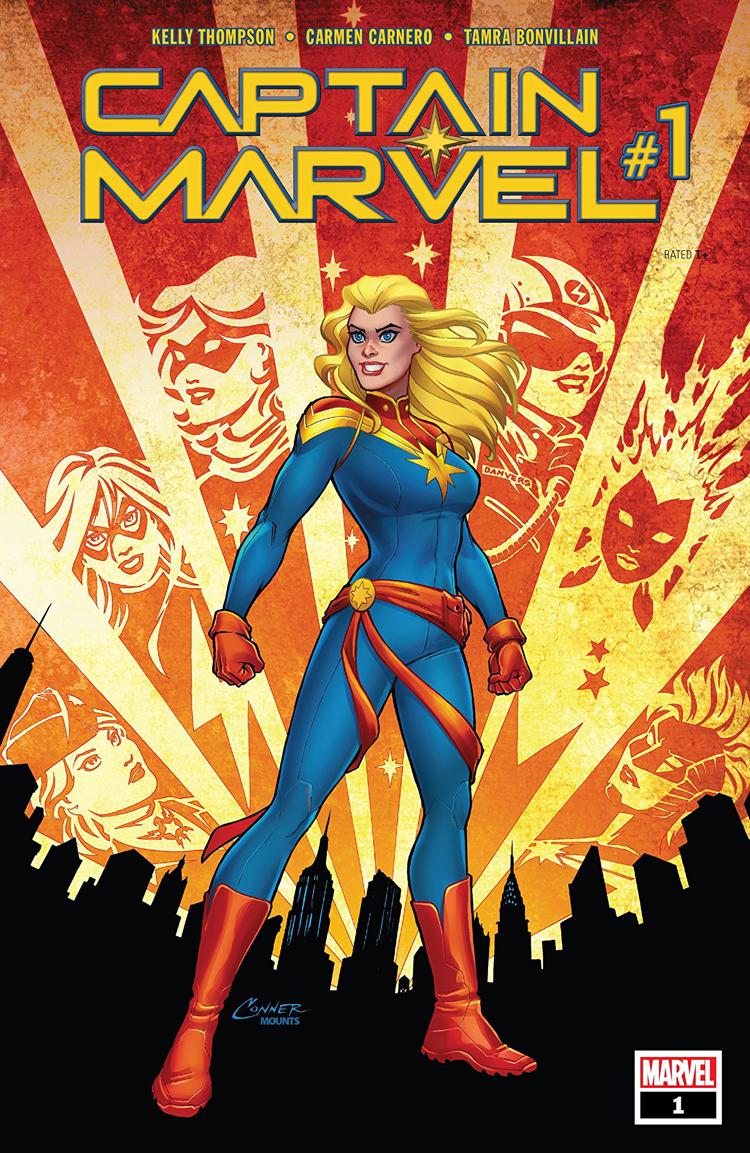 I’m going to be blunt. The return of Kelly Thompson writing Captain Marvel is second only to Carol Danvers’s reboot queen (Kelly Sue DeConnick) returning. Honestly, Kelly Thompson’s previous portrayals of Captain Marvel rank in my #1 spot. So, when I heard she was returning to helm Carol’s story, I was overjoyed. However, I was very skeptical. Since Thompson last wrote for Carol, the character had become an icon of intrusive and bureaucratic-pre-judging government as well as the tormented survivor of a troubled and decimated family. There are two ways this could go… Carol’s story could be bogged down by these details, or make the appropriate nods and find the core of what made fans fall in love with her. And what does the creative team do?! Exactly what needed to happen!

Kelly Thompson has brought back the voice of Carol Danvers at a time when it is needed most. The whole first two or three pages feel like an apology to Captain Marvel fans, for her years of totalitarian misguidance that began through Civil War II, and never fully recovered. The opening line, “I’ve made a whole book full of mistakes,” sets this tone perfectly, leading into an emotional wave of the importance of persistence, resilience and picking yourself back up… no matter how hard you fall.

Another great addition? Carol’s long time BFF, Jessica Drew, the Spider-Woman herself, being in the first two pages. Their witty banter and butt-kicking, sky punching style is back in action. Carmen Carnero’s style is very reminiscent of previous creative teams of the series, but with more details, outlines and emotions. It feels like it sits somewhere between the Dexter Soy issues and the metaphorical bubble-gum pop-manga inspired Marvel Rising artwork. The heavy outlines and black-line shadows are enhanced by the vivid color work of Tamra Bonvillain. Pink, spurting Kaiju monster blood, rescuing a little girl, cracking wise about how obnoxious Tony Stark is… all the elements of “classic” Captain Marvel are present.

This issue is like snuggling in a warm blanket of sky-punching heroism… and speaking of reintroductions…the creative team refocuses, if only for one issue, a romance in Carol’s life that had every Captain Marvel fan in love, when it first occurred. That statement alone might be considered spoilers. However, it brought a smile to my non-romantic face.

Just when you get comfortable and settled back into a familiar Carol world, the whole thing becomes upended. The appearance of a wanna-be big bad completely changes the setting. However, it ends with a closing remark from aforementioned love interest that will have you nodding your head in agreement, and I’m sure is a clipped image already making massive traffic rounds on Tumblr. Captain Marvel fans rejoice. The Danvers saga continues with a joyous, action filled romp that also re-grounds Carol in the elements that garnered her such a cult following once she took the Captain mantle.