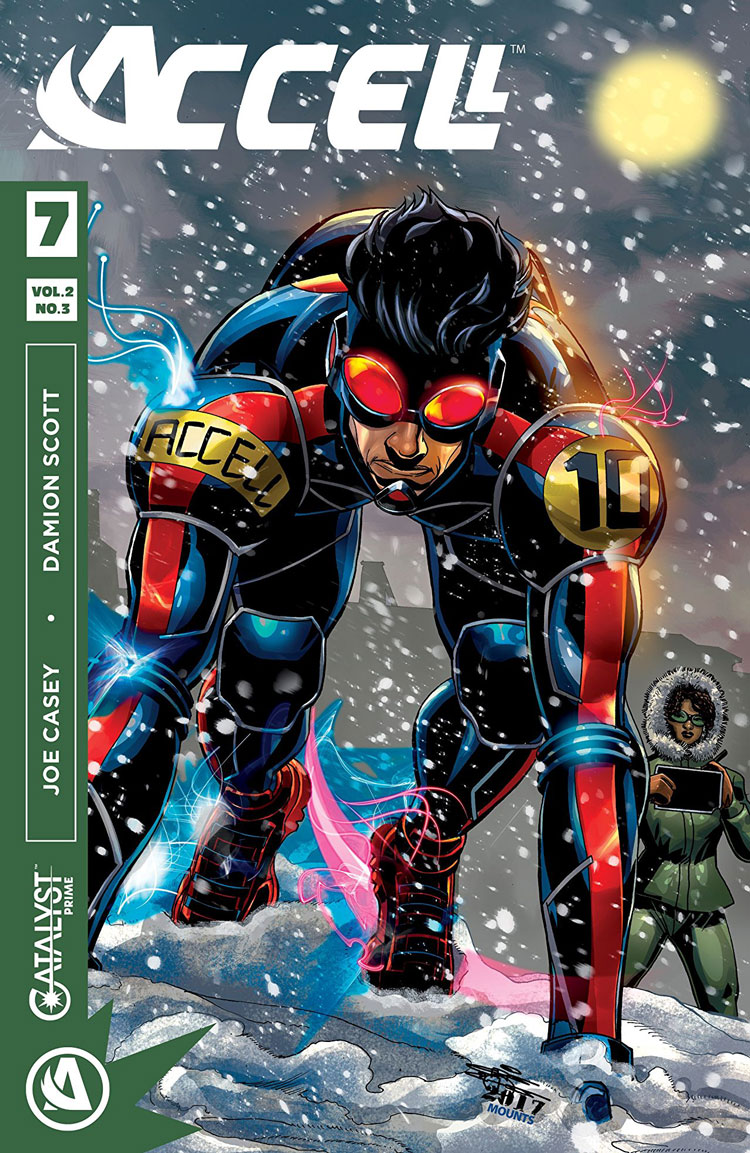 Daniel is off to the Antarctic to run — literally run — some tests for Dr. Althea Morrison and her team. But as the true nature of his powers come to light, so does a new threat for Accell to combat.

As the Catalyst Prime book that’s most straightforwardly traditional in its approach to the super-hero, Accell feels like it’s designed for a slightly different audience than most of the other books I’ve been deep diving into over the past few weeks. And to be fair, that’s not unfamiliar territory for the creators involved, as both Joe Casey (X-Men, Superman, Ben10) and Damion Scott (Batgirl, Robin, Ghost Rider) have quite a bit of super-hero chops going for them.

To the degree that Accell isn’t speeding past standard super-hero fare for me, though, I’m more likely to recommend the book to a pre-teen kid than to an adult looking for a complex take on a super-teen that can bend physics with speed. And that’s OK! Not every book in a line needs to match up in terms of its handling of character dynamics, although my wish for this book is just a little more nuance.

The set-up for the issue surrounds itself so much in the dynamic of “dumb teen boy makes burning with jealousy girl irrationally mad”, that I’m kind of hoping at this point that Monica becomes the super-villain of the piece. It’s the only thing that might surprise me about her spoiled, sort of vapid behavior seven issues in.

The stereotypes that both teens are playing to just doesn’t feel like it has a place in the larger universe, one filled with complicated antagonists, troubled protagonists, and even genuine teen heroes with grit, personality, and care. By comparison, Casey’s take on both Dan and Monica feels cardboard, with the real interest in the issue coming from the ideas behind Accell’s powers and experience of the Stream.

It is an interesting take on a speedster, far more tied to the basics of quantum mechanics than one gets with the Flash, which dallies with hard science and mysticism, but rarely that which falls in-between as more modern physics actually does. Transmitting a threatening force via an extraneous sound is absolutely clever, with Scott’s rendering of the new threat — to be continued into the next issue — really exciting.

Those last few pages pack a powerful punch from Scott’s pencils, Campanella’s inks, and Torre’s colors, but the remainder of the issue doesn’t hold that same power. The initial pages featuring Barrage feel dull in color range by comparison, with a flatter application of color not rising to the gradation level of the following pages introducing the Antarctic environment.

Scott is unequivocally at his best when Accell is in motion, as the physicality of the character lends itself to exaggerated figure study. But that methodology doesn’t resonate for me as succinctly for figures at rest, leaving some body proportions, particularly on Monica and Althea, a little distracting.

A great starter for kids looking for some visual fun, but maybe not the best title to try out for sophisticated characterization, Accell is hitting a few bumps in the road for me with issue #7. It’s mid-arc, so I am optimistic for where things can go, but for now, I’ll probably look for innovation in some of the other Catalyst Prime titles.