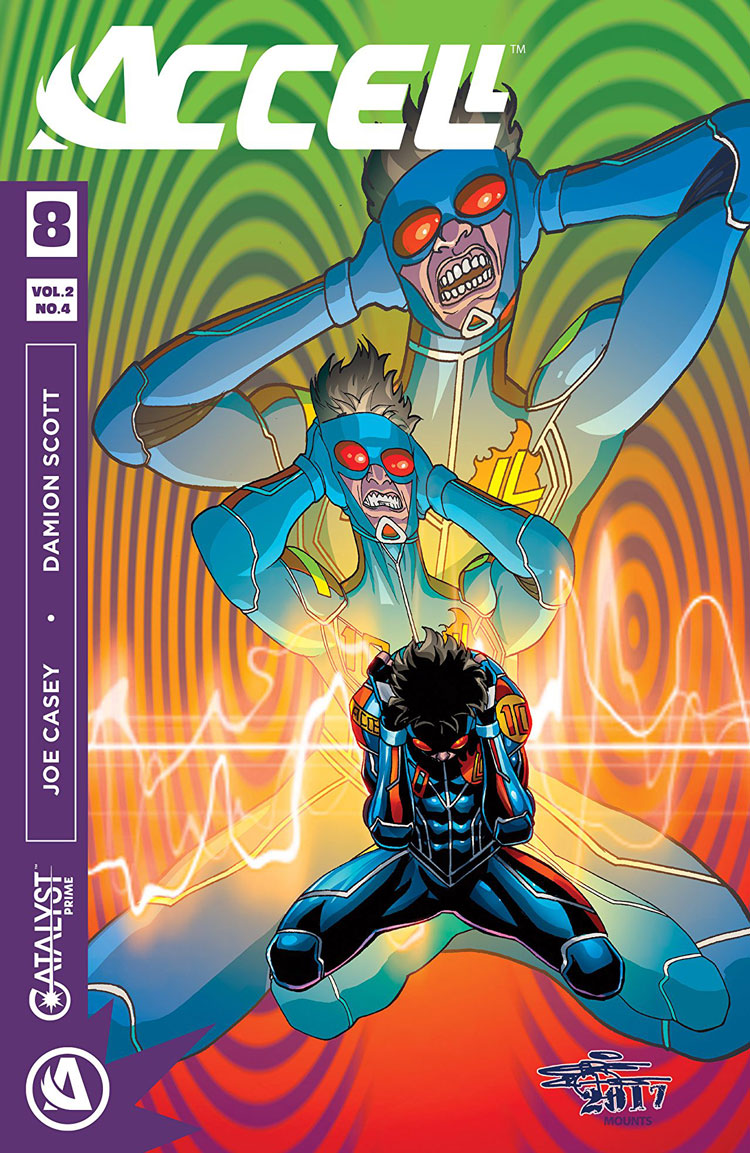 The sound monster that returned from the void with Daniel is about to rip everything in the Antarctic settlement apart. But when the lights go off and the newly-dubbed “Fuzz” disappears, the team has a choice: risk it coming back or freezing to death without electricity in the coldest place on earth.

Continuing from last issue, where Daniel’s Antarctic tests for Althea unleashed the unexpected amid a tiny bit of static in a recording, we get to see Accell in action against a foe — and in small bits see him make some smarter decisions about how to face it down. It’s a slow evolution, clearly, that Casey is going for, and one that harkens back to the early days of Wally West as the Flash, post-Crisis at DC.

This is particularly clear in the juxtaposition of Daniel with Althea, the scientist who, so far, seems here to explain how Accell’s powers and access to this other dimension work. While I’m definitely more intrigued by the mechanics of the powers Accell is displaying — as they feel a little more sophisticated than simply, he can run fast because energy a la Speed Force — I’m much more interesting in what the narrative is going to end up revealing about the good doctor.

And herein lies the waiting game. As an issue on its own, Accell #8 doesn’t move the narrative too far forward, as most of what occurs is an extension or replay of the previous issue’s main events. But as the second arc of each of the Catalyst Prime universe books is extended from 4 to 5 issues, I think that works pretty well. The proof in the pudding, of course, is going to be in the next issue.

Is there more to this dimension Daniel can access? Will accessing it with Althea change anything for her? Is she going to be more than just the smart person explaining everything Accell seems kind of too dumb to understand? It’s a tough dynamic to me, because it doesn’t feel particularly nuanced. For eight issues in, characterization, particularly for Daniel, feels a little flat.

But the treat in this issue can certainly be found in the half of the pages that depict the confrontation between Daniel and what he’s calling “The Fuzz.” Damion Scott’s natural dynamism is in full play, particularly in the immediate double page spread that has the sound monster baring down on the unwitting scientists. Despite Scott’s relatively simple line style, the balance of detail in the monster is only made more vivid by Torre’s glourious neon palette. I am giddy to see the bright yellows offset by the purple-pink cloud, with Scott’s energy lines keeping the entire page alive with excitement.

So much of how Scott has Accell move, within and breaking out of the panel, just lends a really strong visual appeal to the character. It’s just that the quiet times don’t measure up more often than not. Part of that is the expansive exposition. Part of it is that when Daniel’s not running, he’s really kind of a dull guy.

A lot is riding on the next issue of Accell for me, as we will see a conclusion to the second arc, and see more of what Althea’s involvement can mean for the hero. But with this chapter, there are enough thrills to keep me turning pages, but not all page turns are equal as the narrative moves from action to exposition.