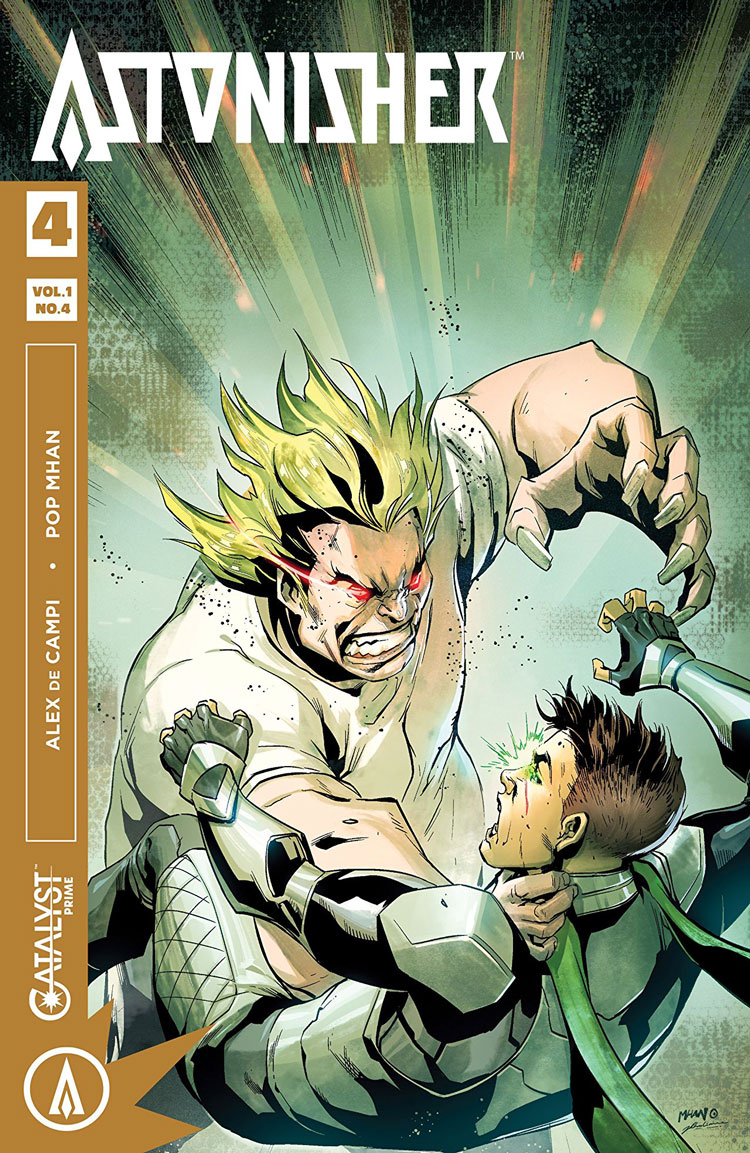 Magnus has been institutionalized, subject to the experimental treatment of his family doctor, who wants to remove Astonisher’s meteorite-infused powers. The only thing is, Magnus doesn’t want to be healed. But Saperstein isn’t Magnus’s only problem. An adversary returns to do some harm. Who will save him now?

One of the things I’m finding to be uniquely compelling about more than a few of the Catalyst Prime books is — and I mean this in the most complimentary way — the bait and switch on character leads. We see it to a great degree in Noble, where a lot of the action happens to the title character, but the real momentum is driven by Astrid, the hero’s wife and action hero all her own. We see it in Superb a bit, although one could argue that’s an ensemble book.

But it’s really starting to evolve for me as I read Astonisher, and watch how Alex de Campi manages to take what starts as a quintessential stereotype and evolves her into someone I’m loving more than the series lead. I speak, of course, of Sasha, Magnus’s utterly devoted — though who can know why — girlfriend, erstwhile gold digger, and fucking cool adventurer.

Framing this issue with Magnus’s ruminations to Sasha and her eventual reappearance as rescuer, de Campi carefully lays out a visit to an institution for mental health without stigmatizing the patients or overly dramatizing the surroundings. This isn’t One Flew Over the Cuckoo’s Nest with Nurse Ratchet “terrorizing” the inmates (although I do appreciate the Rosemary’s Baby-inspired naming of Magnus’s doctor). It’s a fairly sedate hospital that leaves behind the sort of atmospheric exaggeration that could make Magnus’s time there seem trite.

Instead, it’s interpersonal cues and interactions that drive the uncomfortable drama in an issue that completes volume one of the series, revealing one enemy, returning another, and perhaps creating a third — all connected by strings that are starting to show.

Between Sasha’s role and Adila’s — who perhaps makes the most kick-ass appearance by the end of the issue — it strikes me that Magnus’s role here is to be shuffled around. He is, as he says, not the guy with the plan. But he knows how to surround himself with those who are.

Mhan’s line work here works best at these interpersonal moments, close-ups of faces, and the more aggressive of action scenes, but feels a little too static in scenes composed of full body shots. The body language comes off as stiff by comparison to some of the life we get when a zoom-in is provided, or, you know, a car pummels through an outside wall.

While that scene in particular grants a crescendo to the read that’s 100% welcome, in light of the necessarily sedate feeling imparted earlier in the chapter, it doesn’t quite balance out. Maybe it’s because the color palette by Kholinne doesn’t shift appreciably as the mood does, but we get to an end that feels less like an arc conclusion and more like the middle of something that’s still finding its footing.

A slower start than we’ve gotten in previous issues — but an interesting development nonetheless for the series’ secondary protagonists — Astonisher #4 is still weaving its central mystery, and giving us great characterization as it does. de Campi and Mhan have been slowly building Sasha, Adila, and company, while accomplishing something of an onion peel on Magnus, and the inversion of the traditional hero formula in that sense is keeping me waiting for the next issue for more.