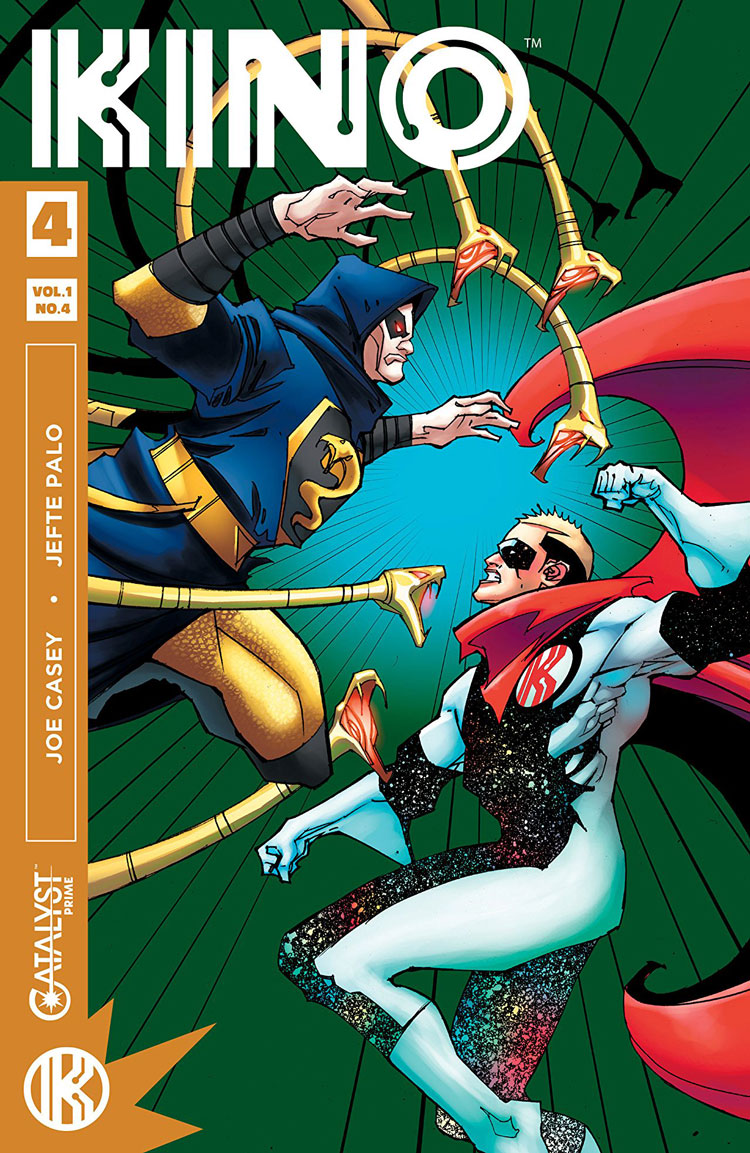 Major Meath is still in a coma, with Assante getting impatient for results — so impatient that he is about to venture into KINO’s reality himself! Meanwhile, Lorena Payan meets with her newest employee and Meath is starting to realize not everything is what it seems in his dreamscape.

There’s a lot to love in KINO, as we get treated to not just one, but two realities each month. We get to see more of the tendrils of the Foresight Corporation and its opponents. And we are graced with some strong narrative-as-design in the sharp angled work of artist Jefte Palo.

Palo continues to reinforce this mod-era cloak-and-dagger story — a military man stolen and reprogrammed to be something more — with line and volume reminiscent of 1960s modernist art. It’s a treat every month to come back to this landscape that Palo and colorist Chris Sotomayor are developing, merging one of the most prevalent narratives of era that birthed The Prisoner and The Manchurian Candidate with an echo of its most lauded minimalist painters like Frank Stella and Ellsworth Kelley.

The continued rendering of KINO’s reality as a retro, but self-aware, environment of 1960s comic books (as we experience them today) is so smart in how Palo is able to blend that seamlessly with the “outside.” Far from jarring, it’s like slipping into a warm bath in an otherwise chilly room to move from one reality to another. And it’s been a real joy to experience these past four issues.

So yes, there’s a lot to love in KINO, but sadly, pacing isn’t one of those things.

As enjoyable as the origin story Casey has developed for the KINO character, I can’t help but feel I’ve read the same issue this month as I did last month. Aside from Lorena Payan’s tête-à-tête with Mister Coal (and I am absolutely enraptured by both characters, to be honest), nothing much of substance happened in issue #4 that didn’t already play out in issue #3. And this is a narrative that begs progress.

In some ways, I feel as a reader very much like Major Meath, hanging on by the tendrils, being fed this story that maybe is going somewhere? It feels like it can’t not go somewhere — the very nature of establishing an interior world is to watch it fall apart and break into the exterior world. But by the end of this issue, I’m left, like Meath, with a zero baseline again. No progress.

And that’s a shame, because KINO has been, while not my favorite, one of the most surprising books in the Catalyst Prime line. It merges a fascinating concept with distinct art to give an amazing origin story. But if Casey and Palo and company can’t get past that origin story, the charm of the concept will wear off quickly for me.