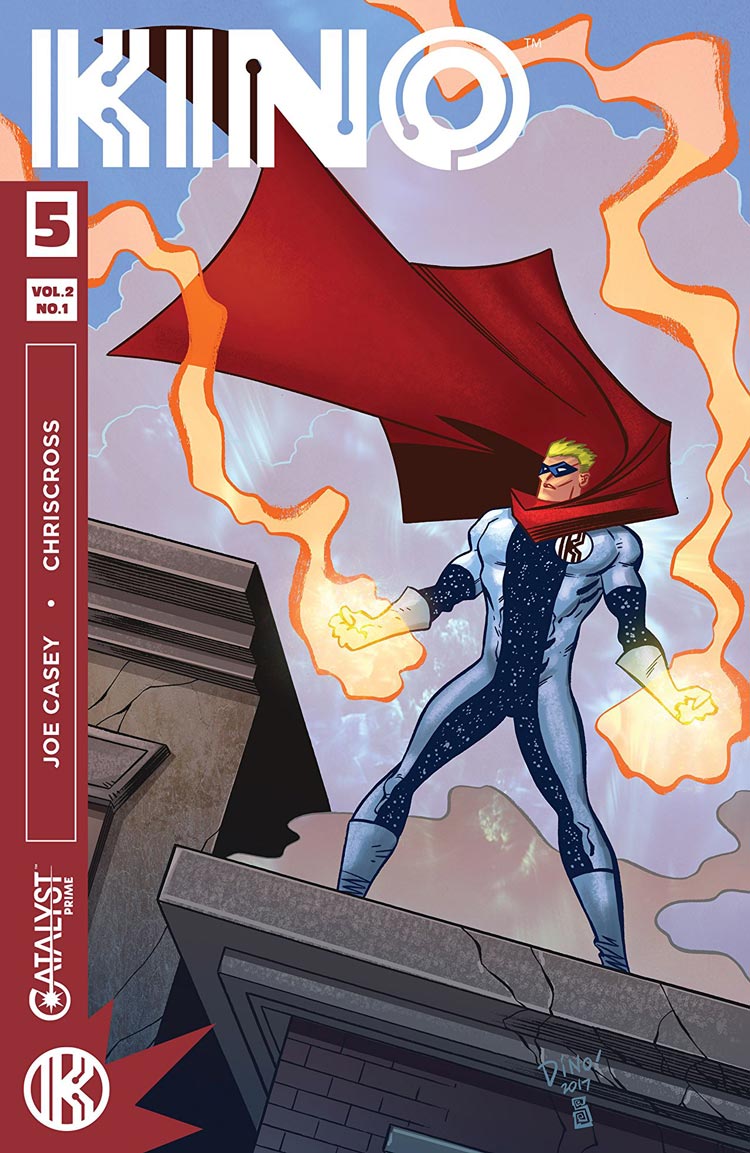 Alistair Meath has a problem. He’s technically dead, but trapped inside his own mind — a mind now being manipulated by scientist Aturo Assante. Assante wants to make Meath the world’s greatest hero K.I.N.O. for his own benefit. It’s time to find out what Meath wants.

Casey reintroduces Meath after the seeming destruction of his psyche at the end of volume 1 and gracefully acknowledges what’s come before, but pretty much sweeps it under the rug as unnecessary to move forward. Not only will this make the next trade volume incredibly new reader friendly, but frankly, it makes this chapter a better starting point for the story in my estimation.

Because the last four issues don’t really matter that much, and fun as they were, the conclusion to volume 1 left them less than satisfying as a story. Partly because Meath himself seemed so pointless in the end. He was simply a toy for Aturo Assante (a pretty obvious take on another double-monogrammed villain Lex Luthor) to play with. By contrast in this issue, Meath has full self-awareness outside of the construct. He’s wrestling with memories, and images of his children that are very far off the mark and somewhat psychedelic.

And in some ways, that’s one of the best parts of issue #5, that we get to see how far from reality Meath’s fantasy/prison really is. By drawing us into to Meaths’ current reality (i.e. wife, daughter, and son), it does with subtler emotion and more powerful connection than all the weird little Boy Scout monsters you can muster. It gives us a real frame of reference for Meath’s psyche, and shows us how he can see through the facade, even one based more closely in reality.

And that’s a great set-up for an ultimate hero.

New series artist CrissCross is also an incredible addition to the title, giving everything inside and outside Meath’s head a visual grounding and solid feel. His disruption of Eloise and David’s faces is inspired, but to be honest, all of his figures and expressions are on point, delivering a strong super-hero vibe with just enough weirdness to make the entire book a visual delight.

Jessica Kholinne’s color palette accents those interior scenes just perfectly as well, giving this strange subdued pastel vibe to Meath and his phantom, psychedelic children. It’s a beautiful contrast to the darker, more contrasted colors in the remainder of the book.

An awesome place to jump into the Catalyst Prime universe, and especially to jump onto the dilemma Alistair Meath is facing, KINO #5 is a fantastic showcase for CrissCross’s work. I’m eager to see Meath face the real-real world soon, though. As much as I delight in revisiting #1, I don’t want to end up in the same place come #4.