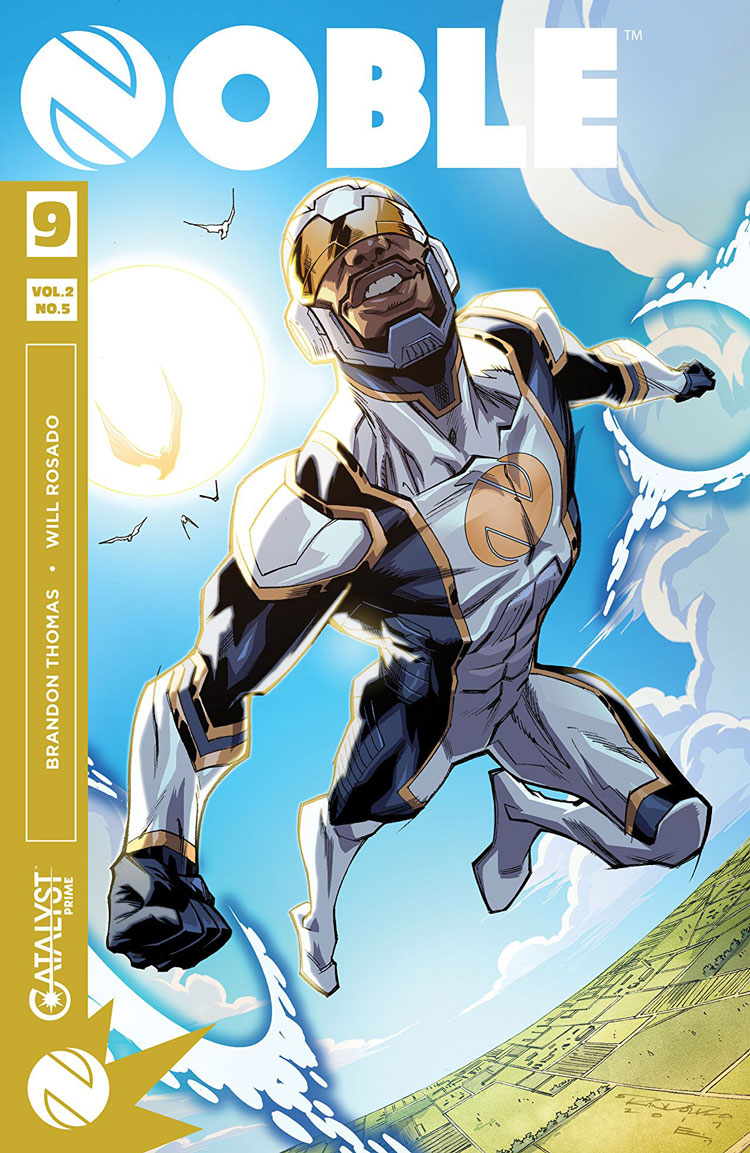 Before “Landfall,” David and Astrid get an opportunity to reconnect, over breakfast — and impromptu surgery — to get used to what it’s going to be like going forward being Noble and… hmmm.

One of things I’ve liked most about Noble since the very beginning is how it was never just about David. Yes, technically his super-hero nom de guerre is “Noble” and the book is called Noble, but I don’t really think the book is named after him as a character.

Rather, it seems clear as day that the book is aptly named after an aspiration, a goal both David and Astrid have to reach in their lives, and it’s the space between where they are, and two other points: where they think they are on one end and what it would take to think of themselves as noble on the other. It’s this particular tension that drives a lot of the narrative when David isn’t blasting things out of the sky or Astrid isn’t staring someone down with a bazooka. And it’s on full alert in something of an interlude that’s this issue #9.

Thomas really gets this emotional negotiation between the reclaimed David and Astrid, who spent the previous eight issues fighting tooth and nail to get him back. In my other review of the week for Batman #40, I talk at length about marriage — and won’t duplicate that here — but we have in these two almost the looking glass image of what Tom King is describing in Bruce and Selina. Astrid and David are on the other side of the unique commitment that’s marriage, and it feels in these pages like an implicit foundation for every word that’s exchanged, and every action that’s taken.

The ferocity of their marriage isn’t exhibited in Thomas’s dialogue with fire or sparks, but with unyielding and steady heat, a bright molten mold that’s transitioned itself into forged steel. Still warm, forever warm, but unbreakable. I feel it deeply in every panel, and it has made so much of the rest of the series work wonders for me, even in moments that felt less refined with other characters.

Rosado’s work here feels waves ahead of last month’s Incidentals #5, without any of that stiffness or flatness that seemed to dominate the character faces. The artist’s rendition of Astrid and David, particularly when alone in otherwise static surroundings, has a life to it in the shadows that seemed to be missing otherwise. Maybe it’s a question of creative pairing, or the fullness of Brandon Thomas’s understanding of this couple translating through Rosado’s inks — but whatever it is, I’m feeling it, hardcore.

The other moments I’m seeing Rosado shine is in some of the action shots, with Noble cutting a super swarthy look in suite and tie and helmet, and a truly adorable shot of him flying across the sky with his son Eli. The angles the artist is using to keep the action feeling three-dimensional on the page are refreshing contrasts to the panel construction itself, but those aren’t the only scenes that feature that type of offsetting. Even in the most mundane of environmental shots, Rosado is making sure diagonal lines criss-cross the box, opening up a lot of energy throughout the issue.

It’s a real pleasure to see the lead book in the Catalyst Prime universe evolve so strongly over the course of a year, and commit itself so much to treating its lead characters as equals. Noble #9 is a great respite, but at the same time, so flush with narrative. A powerful place to rest and reflect on the quality of the book and its characters.