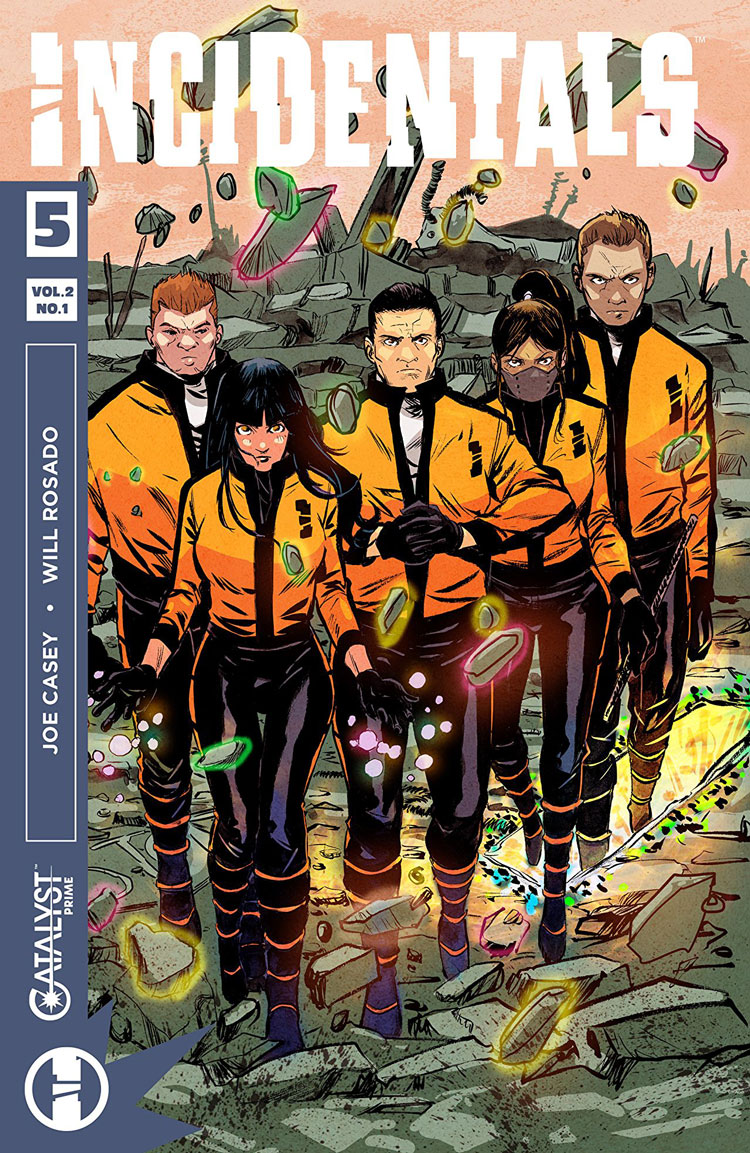 Their first mission a wash, the Incidentals were able to rescue the girl Seven, but lost Alex Winters in the process. Now the mysterious Bo Vincent Chen has recruited the very cop looking to take in their newest acquisition, in order to rescue Alex. But who or what is holding him, and will he survive long enough to return to safety?

I’ll admit, of all the Catalyst Prime titles — seven in all — Incidentals is the one that I have the most trouble with. Writer Joe Casey (who pens two others in the line, the impressive Kino and the growing-on-me Accell) doesn’t seem to have a narrative as organized for this team book as I’m finding in the other titles. What’s likely designed to be a slow reveal in regard to Chen’s motivations and his organization (what even is that?) is strangely hollow, particularly when there are so many characters I can’t believe wouldn’t question what’s going on behind the scenes.

Where did Chen find such trusting outsiders?

Nevertheless, Incidentals #5 represents something of a cleaner plot structure, as we are no longer darting between scenes and instead moving, via character relationships, more smoothly from one place to another. Being able to follow the thread of Tristan’s role in the story from scene to scene guarantees a more consistent narrative, and improves upon a lot of the choppiness I felt for the entirety of volume one.

This issue also sees the arrival of new series artist Will Rosado, who in some significant ways is an improvement narratively over volume one artists Larry Stroman and Rob Stull. Whereas I spent most of issues #1-4 not being able to tell any of the characters apart — repeatedly confusing Shannon with Vanessa, and Alex, Chen, and Marko — every member of the team is now distinct and easily identifiable. Hairstyles, facial details, and dress all feel much more nuanced.

The trouble is that Rosado’s bodies feel very two-dimensional overall, experiencing this strange flatness in otherwise three-dimensional space that reminds me of paper dolls in some way. Close-ups of faces have the requisite details for distinguishment, but they don’t feel life-like. Eyes are deadened and movements overall feel rather stiff, even for moments of talking heads. And the consistency from scene-to-scene is not there. Chen has a pocket square in one panel, none in the next.

The color work by Snakebite Cortez is actually quite nuanced, and while not enough to offset Rosado’s flatness, it moves the pages up a notch all by itself. The way Cortez administers natural light is really peculiar for comics — and I mean that in the best sense. It’s likely part of what makes the environments so strong, particularly as the characters move from dark to bright spaces, and from office boardrooms to covert ops in helicopters in the dead of night.

Incidentals is still a bit rough for me, especially by comparison to some of its stronger peers in the Catalyst Prime universe, but issue #5 is a step in the right direction. With a clearer narrative and more succinct art, I suspect I’ll be able to invest a bit more in the flock of characters at play here. Not quite feeling it yet, though.