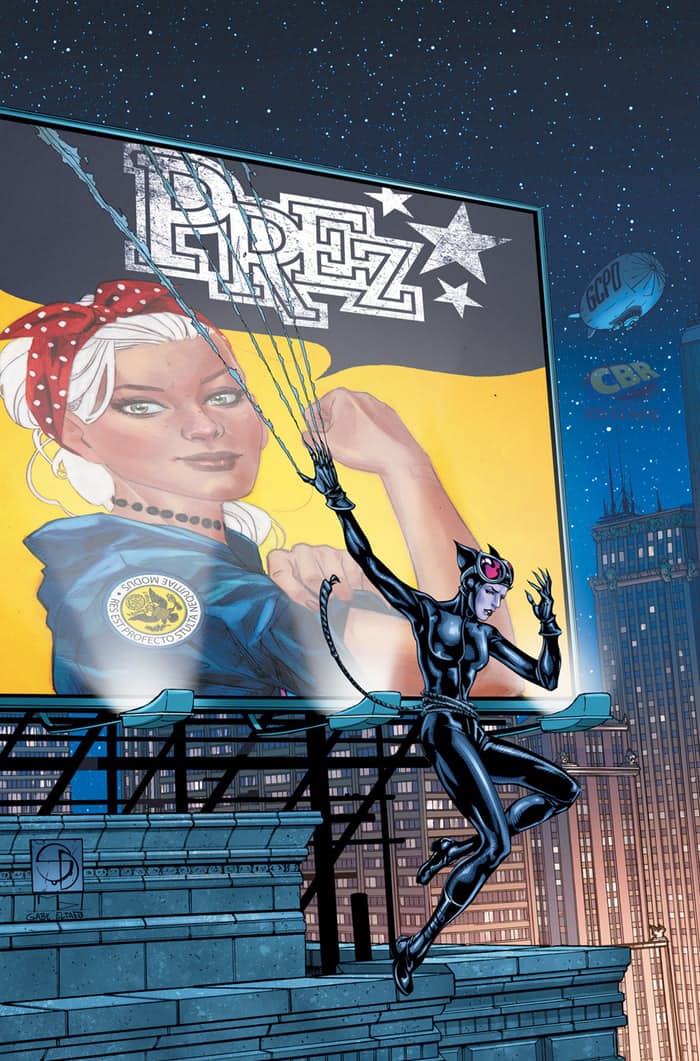 Political satire creeps into Gotham as Selina researches some the nefarious politicians in the first issue of Catwoman Election Night!

Finch has gotten her satire down to a tee. It reminds me of the radio show where Superman fought the KKK, it really feels like she’s trying to make a point with this. A point that feels less impactful after a somewhat convoluted backstory of one of the candidates is revealed by Catwoman, but still, it makes a point. Her portrayal of Drumpf—no Trump—sorry, Penguin feels a bit out of character of what I know of Penguin, but is a really spot on parallel to a certain person everyone probably knows by now. The cameo of a certain Bat feels a bit unneeded as well, but honestly, Catwoman is awesome in this and the cameo of Beth Ross makes up for the small amount of problems I found in this issue.

The art is beautiful. Davis, Delecki, Eltaeb, and Vitorino outdo themselves. I question, as I do for many superhero stories, how comfortable a suit so skintight that it can show all your abs is, but even with that, the detail is commendable. My favorite panel from the group is probably the shadow panel on page seven. Catwoman sits on a criminal, her claws out. There’s this dastardly image made from her through light, contorted like a shadow puppet. Twisted and mangled like a delirious fever dream. It’s terrifying, and in its horror, it is beautiful.

While this issue has been pretty great and I do recommend it, I’d say the Prez mini-comic attached to the end of it is the break out part of this issue. I’m a fan of Prez and it’s crazy reality, so it is really a treat to have Mark Russel, Mark Morales, Ben Caldwell, and Jeremy Lawson writing some more of Beth, especially at the end this particularly political comic series. The satire Prez brings is by far the best I’ve seen in comics and I love how they talk about birth control and gun regulation in this mini-comic. The art is fantastic, the writing is well done, and the overall story is very pointed at specific topics that are extremely important right now.

Overall, this comic is great. I should have come into this knowing there’d be a lot of parallels and political satire, but even without the mental prep, it is an interesting first issue that makes me wonder what exactly is going to happen next issue. If you want to avoid politics, don’t get this, but if you’re interested in looking at our own world through the lens of DC comics, I highly recommend Catwoman Election Night.