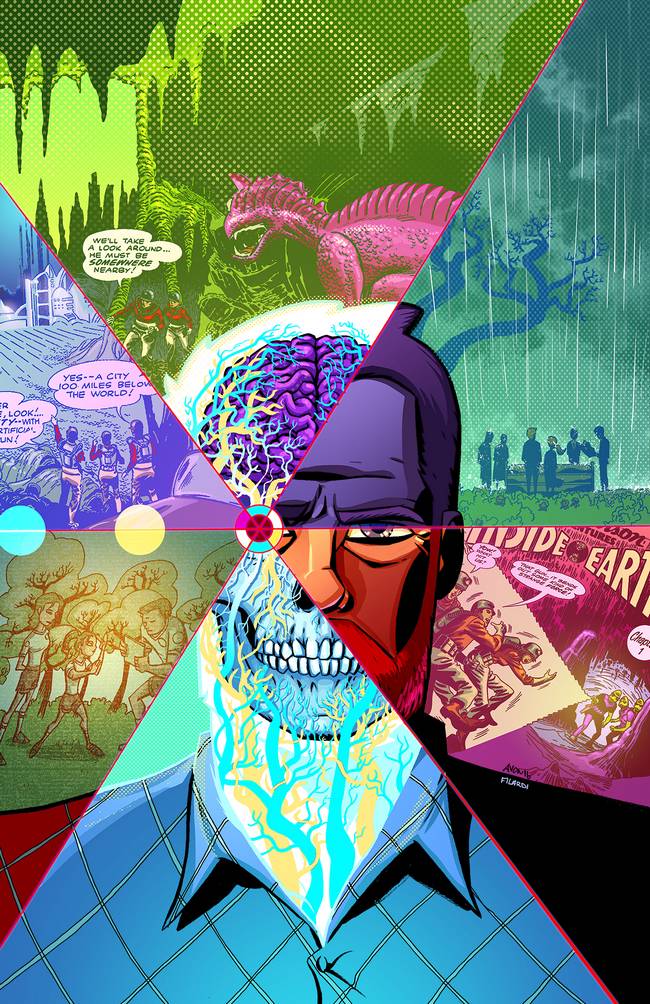 My familiarity with Cave Carson includes reading his original Who’s Who entry in 1980-whetever, reading his secret origin from the Secret Origins series, and maybe catching a glimpse of him in the background of Crisis on Infinite Earths or with the Forgotten Heroes and his appearance in JSA in the early 2000s. But that honestly doesn’t matter. Cave Carson Has a Cybernetic Eye #1 is a comic for new Cave Carson readers. This is a story to introduce Cave to the world and the world to Cave.

The story that launches Cave Carson Has a Cybernetic Eye is one of loss and grief, finding one’s place in the world when it just feels like you don’t even belong there any more. Way and Rivera sell that concept from the start, giving a quick glimpse into the glory days of Cave Carson before bringing us back to present day alongside Cave as his daughter, Chloe, checks in on him before the funeral of Cave’s wife and Chloe’s mother – Eileen.

The first two pages are as bold and daring as the cover: snippets of visual comic book tropes from the aforementioned Ben-Day dots to twirling fleeting memories, harsh ink splotches at the edge of those memories, and even travel via map. Oeming’s drawings take comic book chiaroscuro to a whole new level, substituting shadow as a visual metaphor for sorrow and loneliness. Filardi marches alongside, with brilliant hues that run the full gamut, from softer, cooler shades within that loneliness to bright, sunshine-tinged memories of yesteryear. Transparency and overlays are integral to this story, giving readers cues as to the eye’s malfunction, while also adding density to the tale.

If I told you a Muldroogan appeared and changed the tenor of Cave Carson Has a Cybernetic Eye #1 with a SPLRRGGSHK, you’d wonder what the heck I was talking about. You, being an intelligent reader, would also most likely take this as a cue that there is a degree of the unexpected in this comic.

When Cave meets his match in the visiting Muldroogan, the Ben-Day dots resurface, the colors pop a little more, and Filardi amplifies the contrast present in the scene, bringing in near-neon tones that burst out of the blues (literal and figurative) surrounding Carson.

Underlying in this issue, but not far from center, Way and Rivera make Cave’s cybernetic eye both mysterious and unreliable. The origin of the eye is not revealed (nor should it be, at least not yet) and even Chloe does not know the full scope of the adventure that introduced it. Cave, however, is struggling against visions from his cybernetic eye. Or are they? Whatever the root cause, the eye is assigned blame, which opens the DC Universe passport for Way, Rivera, Oeming, Filardi, and Robins to check in with Wil Magnus and the Metal Men, name-drop Superman, and set up an appearance from a character who, well, that would be telling, which I won’t do, since the reveal is on the last page of Cave Carson Has a Cybernetic Eye #1.

Oeming takes the Silver Age absurdity of our spelunking adventurer and makes it viable. Filardi makes it visually impactful. Way and Rivera make it human and relatable. Robins adds a nice layer of polish to the story, which, at times, has quite a bit going on per panel. The Young Animal creative teams have exceeded my expectations with every issue so far (granted, it’s only four total, but in the span of five weeks, that’s a darn fine track record) and Cave Carson Has a Cybernetic Eye #1 is no exception.

As an added bonus, there is a three-page backup before Who’s Who pages about Shade and Cave Carson and a letter from Gerard Way. That backup flies under the Super Powers title, and uses the logo from the 1980s toy line.

In this tale (tinted yellow to replicate the aged paper of comics from the 1980s) Tom Scioli looks back to the origin of the Wonder Twins on their homeworld of Exxor. Two pages are devoted to the royal upbringing of Zan and Jayna, leaving readers hanging as the pair is set upon by a mysterious malady.

From there, the story switches to Gotham, with a Joker tank rumbling through the city streets. The twenty-eight (!) panels on this one page pit Batgirl and Joker against one another and feature such wonderful bits as Batgirl on a dirt bike, Joketroopers, and “Supercop” Jim Gordon.

Scioli draws all of this (the Wonder Twins and Batgirl) with slow, exaggerated winks to newspaper strips and genericized comic art from that era. It’s a wonderful addition to a very solid comic, and the two pieces combined really have me excited for more. Like now. Give me more. NOW. That said, is it too much to hope the next iteration of the Challengers of the Unknown comes from Young Animal?