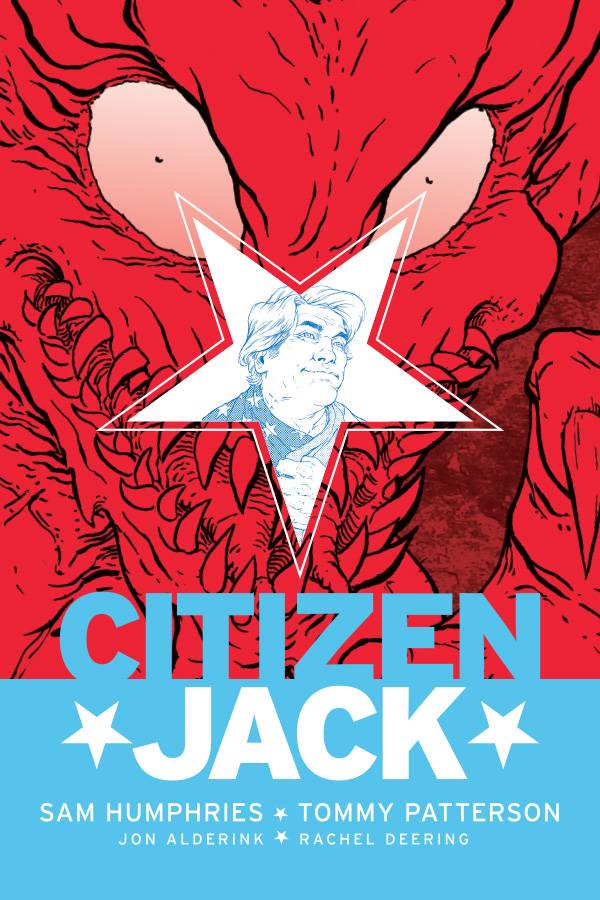 Get out your babies and ready their foreheads for a kiss from the presidential hopeful of a lifetime – Citizen Jack! This brand new series from Sam Humphries, Tommy Patterson, Jon Alderink and Rachel Deering, hot off the press at Image Comics, explores one unsavory would-be politician, Jack Northworthy, and his bumbling journey to try and win the United States Presidency. So what kind of electoral numbers are we looking at for this first issue?

Citizen Jack #1 begs the question on the minds of many during the political season: How many of these politicians have sold their soul to the devil? Citizen Jack follows Jack Northworthy, who’s kind of a jerk (strike: kind of) as he struggles to make meaning of his life after his snow-blowing business declines. After an unbecoming declaration for his run for presidency by way of indecent exposure, Jack is on the fast-track to running the States — with some help of course, from his friendly neighborhood demon. Jack signs an ominous contract, and by the end of the first issue, he’s well on his way to being dopest PotUS we’ve ever seen. Kind of. Maybe dopiest.

Sam Humphries knows how to write a tale that will put a smile on your face. His previous writing credits (i.e. Legendary Star-Lord, Avengers A.I.) have shown he has a knack for the goofy, but is still able to deliver a plot that knocks you off your feet. The writing is fast, witty, and relatable, but pushes even further by exposing a deep understanding of American politics and the frustrations mounting against the current order of election-happenings. The pacing is on point and feels akin to watching the first 45 minutes of comedy-drama movie. Readers are rewarded with consistent new problems, character introductions, and important plot-points as they charge towards the guts of this book, encapsulated by the final page of full-on demon terror. This is some solid, solid story-telling.

Citizen Jack becomes real with Tommy Patterson’s incredible art.  This issue has Patterson drawing everything from the mundane, whiskey guzzlin’ actions of Jack to a deep sea ice dive with leviathan-like creatures to ghastly demons. Patterson captures the winter-feel of this issue from floating snow to the soft tufts of Jack’s ever-prominent pink fuzzy robe. This book is filled with detailed line work and whimsical energy. Patterson delivers Humphries’ written humor in this book with comedic depictions that are hilariously on point. His expressive faces make it easy to laugh along with this book and then feel your heart stop at the more sobering moments in this first issue. Patterson has the incredible quality (similar to The Manhattan Project‘s Nick Pitarra’s) that makes you quirk your eyebrows at the raw nature of the characters depicted, yet step back and see a gorgeous portrait across the page.

Jon Alderink’s colors suit the tone of this first issue perfectly. The hues are gentle but bold, a perfect symmetry with the slow-churning yet forward-moving pace of the book. The light colors allow Patterson’s numerous lines to stand out and also adds a wondrous amount of depth to each scene. Rachel Deering has lettered this book with finesse, perfectly conquering the multiple types of dialog in this issue. Her opening narration style captures a “holiday-tale” feel to it, while the regular speech balloons work in sync with the story’s flow.

Citizen Jack pulls no punches in its critique of the American political system. This issue is a snarling beast of story — it looks fantastic, it reads magnificently — it’s entertainment at it’s finest. Citizen Jack has my vote.