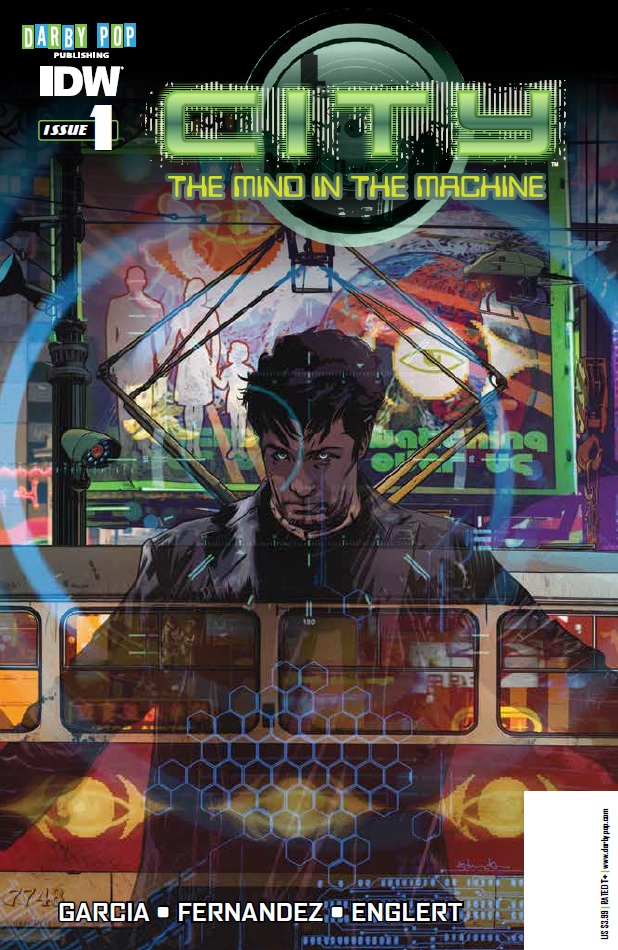 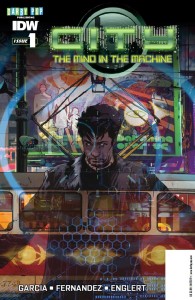 San Francisco is not just home to the latest technological trends: it’s the unwilling host of several terrorist cells, public safety concerns resulting in 40,000 cameras perched throughout the city to keep an unblinking but unmanned eye on the streets. GOLDEN SHIELD, a program developed to help sort through the endless flood of images to find crimes in progress, seeks to man those cameras – and when the program fails, they take a much more literal route to put watchful eyes on the Golden City.

Garcia isn’t new to writing screen-worthy works, and it shows in City: The Mind in the Machine. The issue flows like a pilot, complete with an abrupt ending that dares readers to tune in for its true potential next episode. And the book’s premise is certainly intriguing, particularly with so much real life buzz recently about privacy versus protection in government monitoring. But the cast, character interactions, and storytelling are so painfully standard tv fare, the book’s great concept is buried beneath an unshakeable sense of “same old, same old.”

Garcia presents us with an uninspiring array of characters, including the book’s star, Ben, a techie variation of the Peter Parker type. From a wide-waisted landlord hassling him for money, a ladykiller best friend pestering him to get out more, and a romantically interested female pal Ben is clueless about romancing, Ben’s supporting cast is plucked straight from the scenes of literally every tv show ever without a unique spin in sight.

The story is delivered with about the same lack of shake-up. The issue’s highlights are when its premise shines through the safe route the writer takes in delivery, and one hopes when Garcia becomes comfortable that his plot ideas are a success with numbers to show he’ll deviate from what makes a tv show float with the broadest audience and take some risks with the subplot of Ben’s life and his supporting characters.

Fernandez is the star of this book, bringing to the table a unique style of drawing people while keeping backgrounds grounded in realism; occasionally a face will look unnecessarily contorted and his style seems to vary slightly on some features, but as this is a first issue it might likely be Fernandez getting used to the characters. He rarely leaves the background of a panel blank and yet doesn’t once produce a cluttered page. He tackles hospitals, offices, busy streets, buses – all without a visual stumble. And with the exception of a forced T&A shot, clothing fits and poses are all genuinely human.

The panels themselves are expertly placed and their shots well-chosen, be it focusing on running feet across through a wide shot, zeroing in on a frustrated man cowering in the dark, or devoting several panels to a character stumbling away from danger to heighten suspense. Likewise, splash pages are used to full affect, a funny but unfortunate reveal and a frightening explosion both getting their deserved pop with the reader.

Englert – and for several pages, Serrano – treat Fernandez’s work with mostly flattering colors. Overall tame color choices help bursts of fiery gas and even the soft glow of car lights gain the attention of the wandering reader eye, with occasional texturing giving life to the pencilwork. These efforts only occasionally skew too much, as with shadows and glows on skin and hair sometimes too shiny for Fernandez’s visuals. Still, it’s a great-looking book, and the coloring work done where Ben struggles through the bus to escape is gorgeous. (In a terribly grim way.)

The absolute best part of this book is the occasional glimpse through Ben’s new eyes, which struggle to reform the world Ben knows through pixelated imagery. It’s a genuinely chilling concept amazingly well-executed by the artist team.

Garcia can be brilliant with this book. The concept insists that beneath the cardboard cut-out characters and relationships he’s placed his story on. Perhaps in future issues, we’ll be seeing those possibilities come into focus.