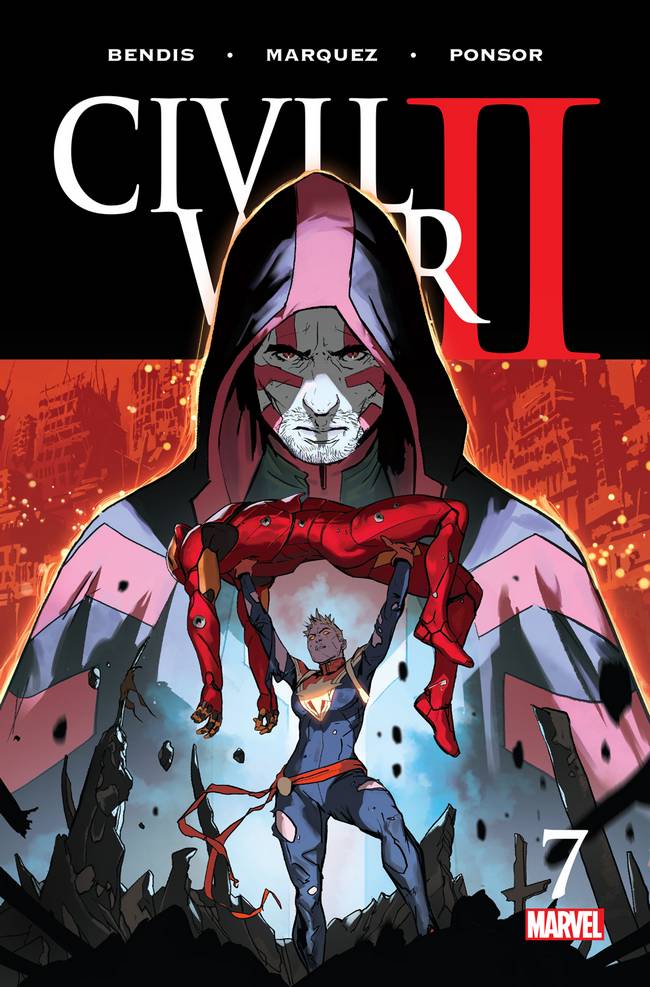 He pushed her too far.

Ulysses is quite literally in his own little world as he comes across an odd future and a familiar face, trying to gather clues about where he is and how it relates to the superhero conflict du jour. Carol meanwhile is at odds with herself, and Miles and Steve meet to make sure their future doesn’t come to fruition. All of this is cut short by an intervention from Tony and a round a fisticuffs between him and Carol.

This story does not hold up to critical analysis. It continues to be one which makes little sense for a variety of reasons, including character, plot, pacing, and dialogue. So much of the story seems strung together with weak twine, the gaps and flaws glaring. Whether in the context of the issue itself or the event as a whole, things just aren’t lining up for me. Warning for spoilers ahead.

Let’s take Ulysses’ vision. He has a vision so strong he’s teleported to the future where he encounters an Old Man Logan. Apparently Hulk’s kids are running around the world and Jersey looks like it got dusted over with red clay. The Inhumans have jumped ship and Tony pushed “her” too far. We don’t know who “her” is and it could be Carol, especially if you consider the last image of the issue, though for reasons I’ll cover in a moment, this doesn’t quite make sense. Regardless, these apocalyptic scenes with Ulysses are so cryptic it hurts. I understand Logan has lived in this world and feels everyone should know what happened, but this relies far too much on suspension of disbelief to get the point across. For the penultimate issue of an event, that delivery falls face first and doesn’t do much but take up pages and barely add anything new to the story.

Then let’s discuss Miles and Steve meeting. First, Miles is surrounded by police because he’s standing on the steps of the Capitol. They ask him to remove his mask but don’t give much other reason for pointing guns at him. It takes the intervention of Maria Hill and the arrival of Steve for them to back off. All other things aside, the optics for this scene are not wonderful, especially considering our social climate in America. Once they start talking, Miles and Steve assert they aren’t going to kill each other. While this can be valuable from a narrative perspective in the context of the last issue, I’m not sure it was necessary for Miles to go to DC, declare he won’t kill Steve, and it be just that, with no other stakes until Carol arrives.

Carol’s presence is another issue for me. At first she is priding herself on honoring Miles’ autonomy, but her method of doing so is to again interfere and get him to “come to [Carol] on his own.” Her idea of peaceful intervention has had some element of force for this entire event, which I’d argue goes against her values and the idea that her methods of securing the future are completely sound.

Speaking of characters who feel they’re in the right, Tony shows up out of nowhere at the end of the issue, putting up a forcefield around Miles. Then he and Carol fight. I’m not sure how this scuffle was supposed to fit in the story, but really it just felt rushed and completely unnecessary. This scene also showcases Tony’s penchant for doing ethically questionable things under the guise of doing what he feels is right.

All of these points take us back to Ulysses’ vision. Logan makes it sound like Tony made the world go boom, all because he pushed “her” too far. Yet, there wasn’t much pushing. In fact, Tony showed up, did one thing, and he and Carol immediately start trading blows. This is yet another area that relies too heavily on suspension of disbelief, that we have to assume “Oh Carol is just fed up enough from the previous issues” but there’s no real indication of that. The end of the issue, encapsulated in this final scene, probably has me scratching my head the most.

Brian Michael Bendis did a good job of building tension, which I felt could have gone somewhere. Ultimately, though, the execution of Civil War II #7 still leaves much to desired. Per usual, the art duo of David Marquez and Justin Ponsor supply excellent visuals. I like Marquez’s emotive characters and there are some wonderful shots through the issue. Ponsor does the best with brilliant images, like the fight at the end of the issue. We have new additions to art in Andrea Sorrentino and Marcelo Maiolo. The Old Man Logan pages are beautiful even if nothing but desolate. Logan is cloaked in shadow, befitting for this mysterious presence in the story. These scenes are a nice break and provide a stark contrast between the main events of the story and this possible future.

Civil War II #7 stays within the event’s knack for unnecessary plot elements and breakneck changes in the story, which even the beautiful visuals cannot overcome. The heightened tension between Carol and Maria, Steve and Miles, were a good touch, but the latter was bogged down by odd dialogue and a development that came out of nowhere. At the end of the issue, I have no idea what’s going to come of this event or what real or lasting impact it’s going to have besides confusing readers with inconsistent characterization between the main series and other ongoings. There’s just one more issue, so at least we have that.