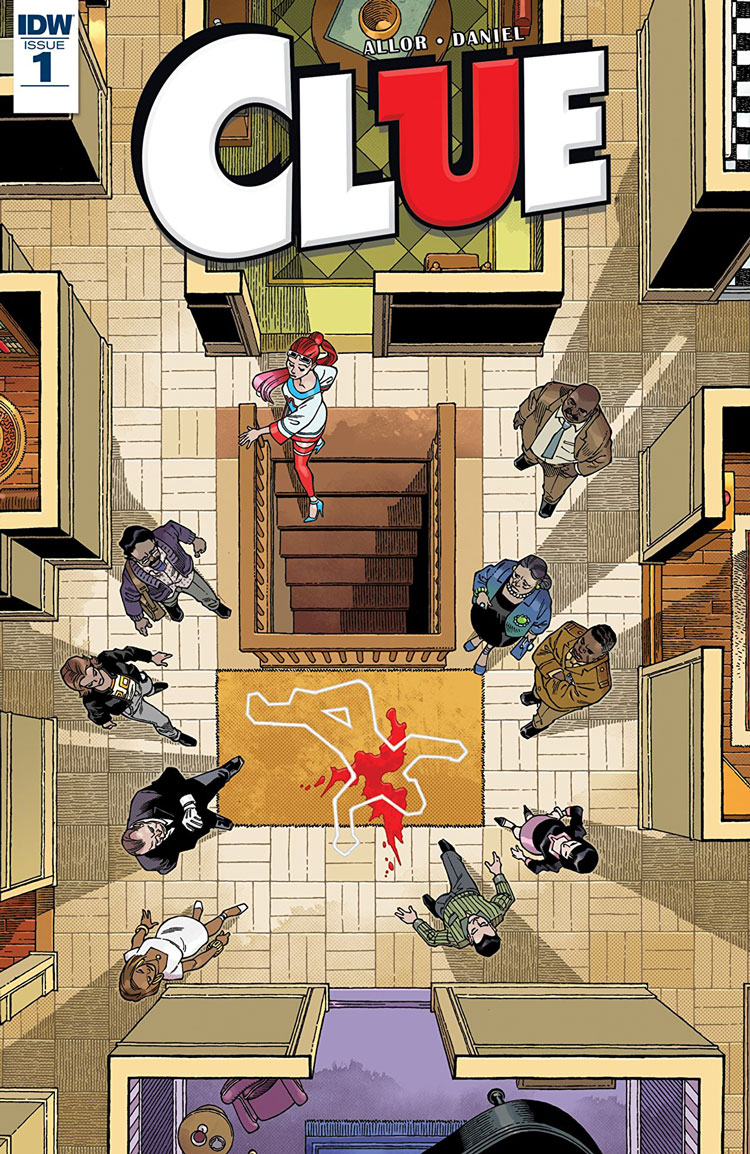 If you thought the Clue universe could not get more irreverent, then you never pictured this comic. The Hasbro board game gets a modern revamp that includes a more diverse cast, breaking the fourth wall, and plenty of… murder.

Told from the perspective of Upton, Mr. Boddy’s omniscient narrating butler, Allor and Daniel have no problem taking a jab at celebrity types that have taken a hold of the headlines in the last few years.

Mrs. Peacock is the most familiar character of the group. She is still the rich wife who may or may not be responsible for her husband’s death. Col. Mustard appears very competent and a man of few words. Professor Plum introduced as an idiot savant. However, his actual charactization and dialogue more align with as a person with high functioning autism or who bends the conventions of neuro-normality.

Ms. Scarlett is no longer a starlet, but an Australian hip-hop artist that can make one think of Iggy Azalea. There are new game characters such as Dr. Orchid who is a toxicologist with a secret, and Senator White, a self made woman who has turned to dirty politics.

The most drastic characterization change up is that of Mister Green. He is now a pharma-bro in a sickening combination of Martin Shkreli and online trolls who ooze toxic masculinity and a love of violent hypotheticals.

There is also an effort by the creative team to make the characters as diverse as possible, both in race and sexuality. It is not heavily spotlighted, but instead just naturally part of the fabric of the story.

Daniel’s style is a great combination of pop art and modern day cartoons. Jawlines are more square, colors are bright, and shading is a combination of bright colors and  half tone color shadows or shading.

Layouts are continuously, but subtly, a combination of panels overlaid on top of each other. This along with dark gutters help the story to flow, even when there isn’t much action. When Allor’s dialogue does call for some hilarious fourth wall breaking, Daniel’s has Upton breaking panel boarders in unexpected fashions.

You can’t help but bust out laughing at the self-awareness this creative team brings to the story. Instead of fighting the silliness that the Clue board game creates, they channel the 1980s movie and kick it up as much as possible. Plus, you’ve heard of after credits scenes in movies… but what about comics?

Make sure you’ve read the whole comic! Yes, just like the movie, there are three possible additions at the end of each issue. It wouldn’t be Clue without it.