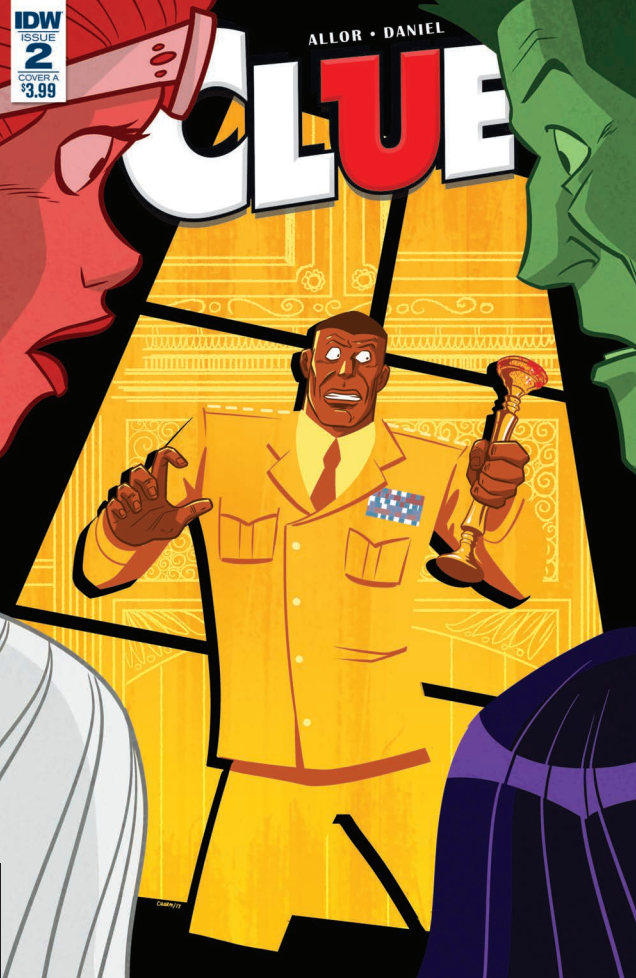 A murder, most foul. Then another murder. And…more murders. THIS IS CLUE.

Did I expect the first issue of Clue to be one of my favourite comics of 2017? No. I thought a comic about a board game was a new level of stretching. The creative team and word of mouth got me to give it a shot and I was wildly entertained and impressed. Naturally, I wasted no time reading issue #2…and I was not disappointed.

Allor and Daniel have built a world for Clue that is a kindred spirit to both the film and the board game. They use the setting to create the perfect everyone-in-one-spooky-house-murder-mystery feel, and more than anything they are actually building a legit mystery here. I’m not reading for just the gags and quips with issue #2, I actually want to know who did it.

Allor’s dialogue is fabulous, with each character’s personality growing by the page. There’s more than meets the eye (TRANSFORMERS PUN!) with each character and Allor is doing a great job of revealing that slowly. The messy relationships that were supposed to be secrets and all the different motives people had coming into the house are blown into an even bigger mystery in this issue and I just couldn’t stop grinning the deeper I got into it.

Nelson Daniel’s pencil and colour work sets the perfect visual tone for this story. His characters are the perfect balance of cartoon-ish stylization, but there’s an edge here too that reminds people they are reading a murder mystery. The characters are expressive and Upton’s smug grin as he acts as our omnipotent narrator is the best thing ever. IDW assembled the perfect storytelling team to bring Clue to life and I love the fact that I can say that a comic based on Clue is one of the best reads in the market today.

Clue #2 continues the strong storytelling Allor and Daniel began with the first issue and takes this mystery in fun new directions. You won’t be disappointed by Clue, it is comic that takes a gimmick and turns it into a hilarious, legitimate story featuring an engaging, amazingly diverse cast of characters.