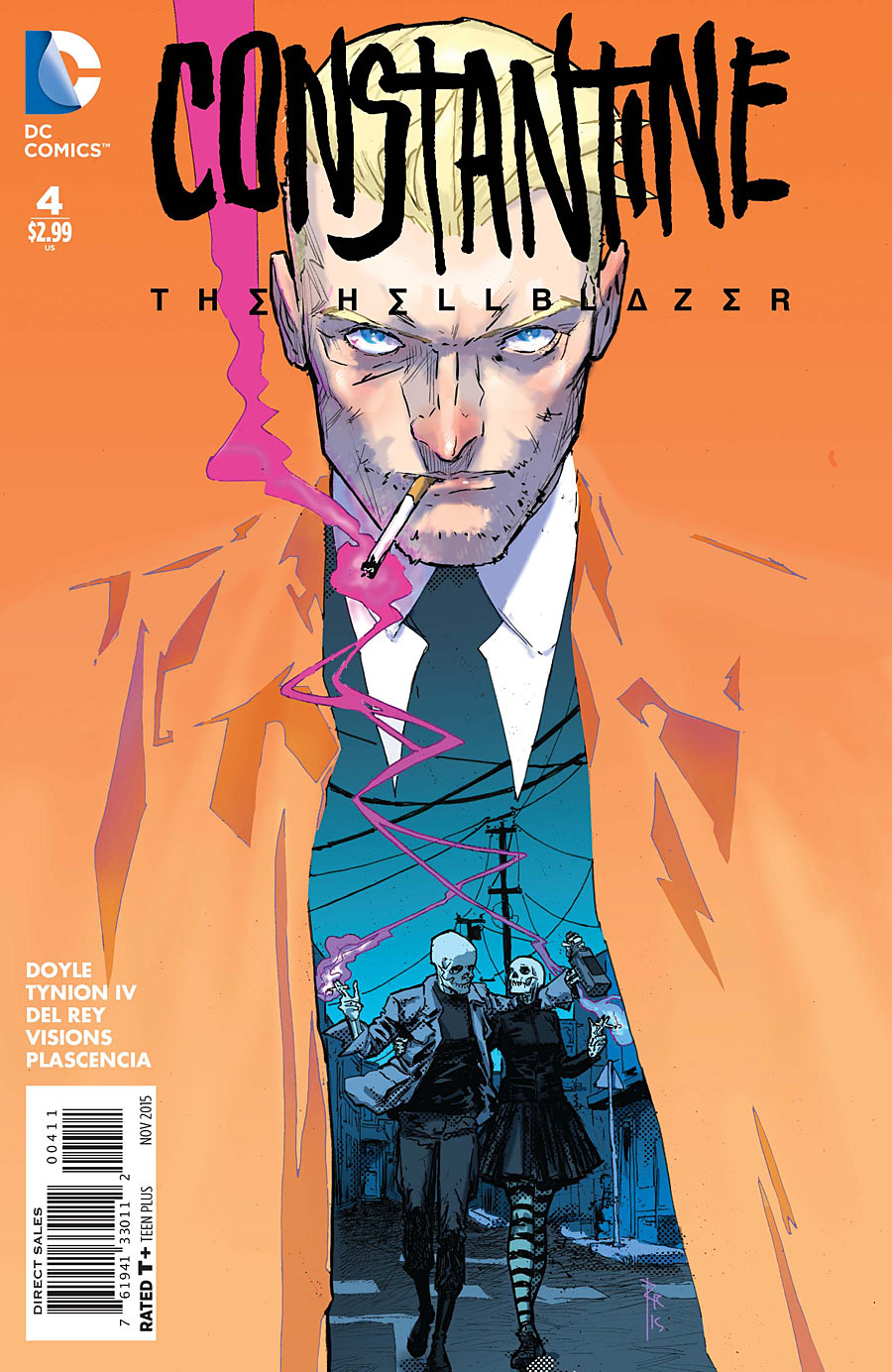 John Constantine may be haunted, but it’s the memory of his lost love Veronica that’s following his conscience around. As he takes a stroll down memory lane to his early band days and when the magic first took him in, John comes face-to-face with the monster that’s been tracking his ghosts — and what happens next surprises even the unflappable Hellblazer himself.

There must be something really compelling about the vulnerable bastard figure that speaks to our most natural urges to save other people. That has to be the explanation. Because while John Constantine isn’t a villain by any stretch of the imagination, he’s no hero, certainly not a nice guy, and couldn’t be trusted farther than one could hurl a pitchfork. He’s often the worst, and we see him at his worst here, drunk in one timeline and simply greedy for power in another.

So, why is he so goddamn alluring? Is it that he needs saving (he doesn’t)? Is it that he’s so bad he’s good, like a 1950s motorcycle bad boy? Is my mother warning me about how “fast” he’ll go if I meet him behind the school building?

Well, she probably would, but I can blame Doyle and Tynion, because they capture that sensitive soul rotting out in that gorgeous husk of a man like no one else has in a very long time. They have given us a John who we know 100% intellectually is the worst guy in the world, and made him lovable beyond words. And that dichotomy is only exaggerated by the time shifts in issue #4, giving us both sides of the figurative bell curve of magic as it comes on strong and takes its toll on the Hellblazer.

To be fair, nothing much of substance happens in this issue. It’s a wandering, of sorts, through John’s life and the places back home he’s revisiting to try and recapture who he was that he never wanted to be. It’s not even believable that John would want to go back to a time before magic and that’s part of what’s so amazing about this issue. We’re meant to believe his drunken stupor comes from regret, because that is what a heartfelt human being would experience. But no. I don’t for a minute believe John regrets what happened to him or Veronica. But maybe he has a smidgeon of regret for not experiencing regret. Or maybe I’m in love with the bad boy who’s going to knock me up and ride away into the mist.

Either way, Vanesa Del Ray captures both eras so beautifully in their utter depravity. Then feels like a drug-addled haze, as magic weighs heavily on the page like a fine mist with mass. Now just feels empty, with Constantine’s ragged form taking on a tired, rather than wired, look. It’s almost like the difference between being awake for 48 hours on uppers and coffee versus sheer will. Both take a toll, and we see that in Del Ray’s line and panel detail.

Then, the artist has cards flying through the air, hair mussed or raised by electricity alone, and pencils move from frenetic at the beginning to ethereal by the end. Now, everything has a weight to it, a gravity pulling downward, as lines are long, drawing John and the other characters downward, with colorist Plascencia’s sense of darkness surrounding him at every turn.

And then there’s the in-between spaces — these full page memory boxes that get more and more disturbed (disturbing) as the book goes on. It’s a beautiful dance the art team does, around the writers’ back and forth, and we get to feel the full rawness of something John has done to someone he loved. Imagine if he hates you.

Another ravishing issue that reminds me of just what a special creation John is, Constantine: The Hellblazer #4 is a perfect picture of a deeply imperfect man, and it makes me feel dirty, titillated, tired, and wanting more all at the same time. Doyle and Tynion have mastered the bastard, and we’re reaping the reward. Even if it means giving up a little piece of our souls in tribute.