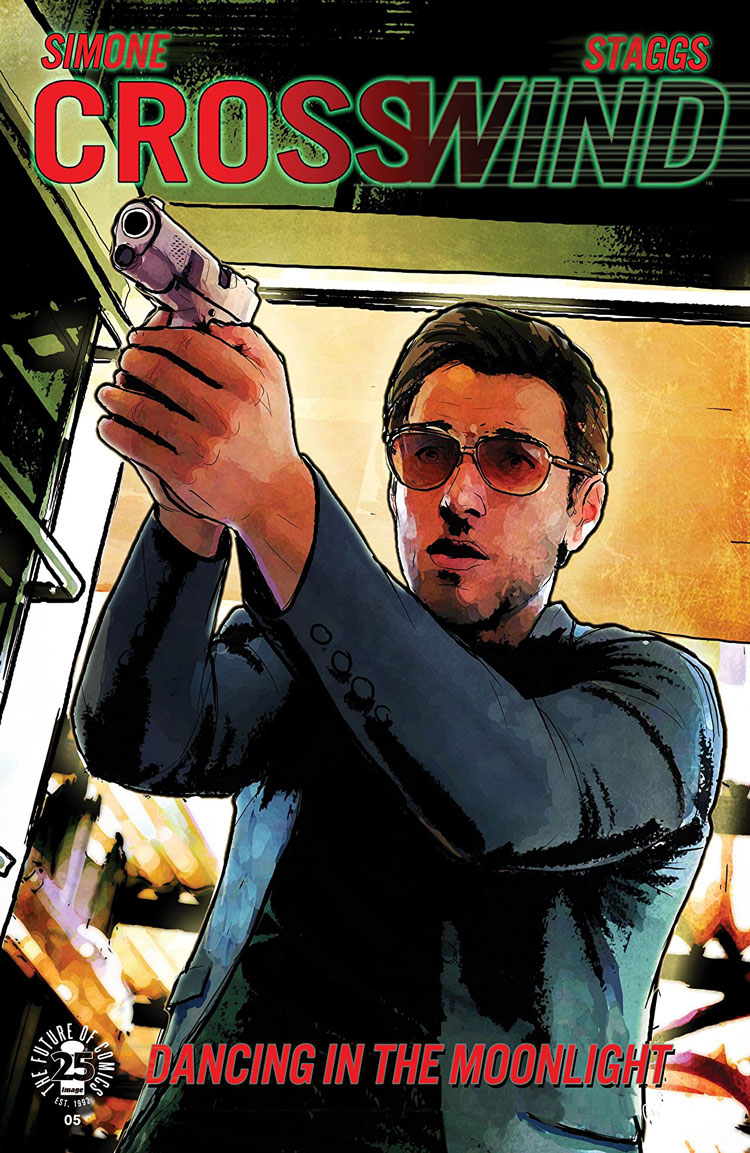 After four issues of being thrown into the chaos of a body-swap between housewife Juniper Blue and hitman Cason Bennett, we finally get something the two of them don’t: the why.

I’ll be referring to Juniper and Cason as themselves, regardless of the bodies they currently inhabit, in part because it’s a lot less confusing and also because of the mantra of the issue: You are still you.

We learn that Mr. Vox, the old man who performed the switch, did so because his wife was dying of cancer and the flight home was full. He tried to get one of the passengers to trade places with him – two of which were Cason and Juniper, who both harshly rejected his pleas. Vox’s wife died alone as a result, so he used his “switch the souls of others” powers (it’s cooler on the page than I make it sound, trust me) to punish them and make them “think of what their actions do to those around them”.

Well, that certainly has happened, and Juniper and Cason certainly have to deal with the consequences of one another’s actions. This is the issue where they each truly begin to mesh themselves into the other’s life, but as themselves, not trying to pretend to be the person whose body they’re stuck in. How does a housewife become a hitman and vice-versa? Turns out, just by being who they are instead of who everyone thinks they’re supposed to be. We’re not quite at the finish line yet, but now Juniper and Cason are ready for it.

What I’ve loved about Cat Staggs’ art on this series is how well she illustrates Cason and Juniper’s inner selves. Cason’s body language is aggressive, usually sitting in a manspreading pose. He takes up space on the panel. Juniper is more timid and tentative, conditioned to be small and quiet. She generally keeps a bit of distance between herself and others. We see this regardless of which body they’re in, and it’s an excellent bit of consistency.

I do want to address one scene that I had mixed reactions to. As a cisgender woman, I’m not qualified to speak on behalf of trans people, so take my opinion with a grain of salt, but I’m not entirely sure how to feel about Maizy’s comment to Cason: “Do you have any idea how many people would love to be in your shoes? …it’s not a curse, but a gift.” Which, sure. I do know trans women who would love for their bodies to magically be the way they’re supposed to be.

Except Juniper and Cason aren’t trans, as far as the book has suggested. This was something forced upon them. They didn’t seek it out. They are working towards adapting to what looks to be their new lives, but they didn’t want them in the first place. This was a malicious act of revenge using a cross-gender body-swap as a punishment. As a story, CROSSWIND is compelling; as an allegory for being transgender, the implicit lack of free will here is unsettling.

Gail Simone has proven to be a trans ally in the past, and certainly one who’s willing to listen and learn, so I’ll give her the benefit of the doubt and wait to see how this plays out.