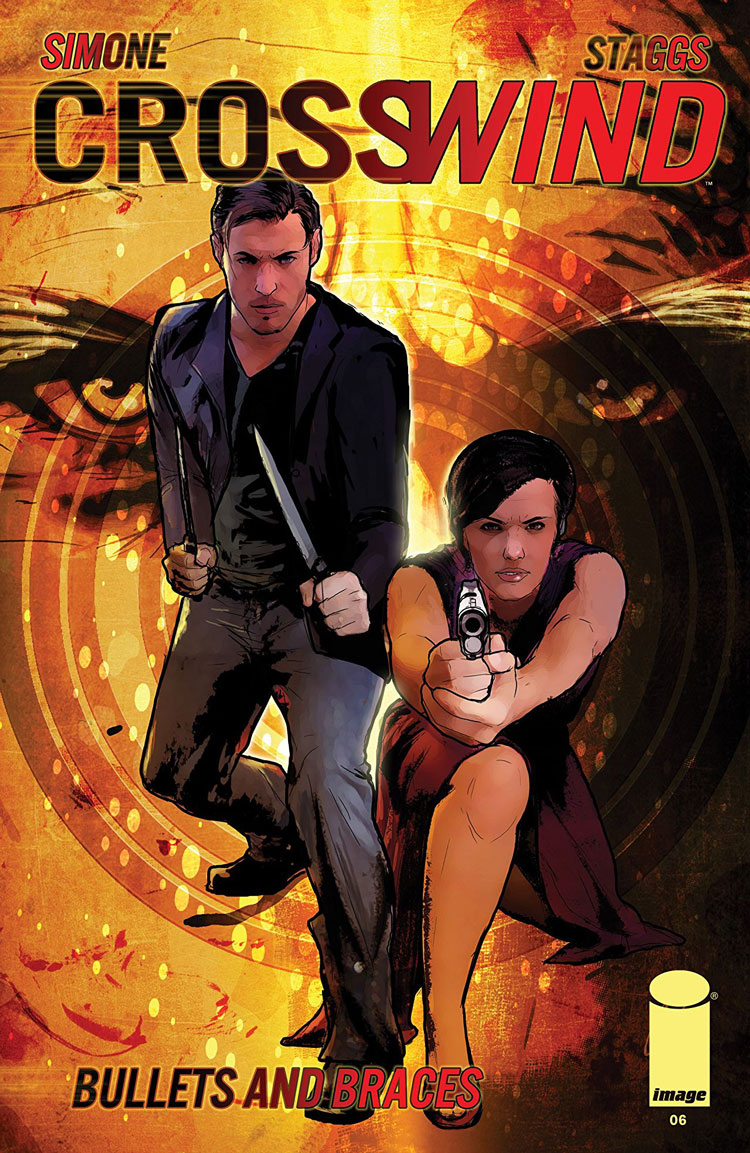 One thing I’ve gleaned from Gail Simone and Cat Staggs’ Crosswind in its six-issue run is that empathy can be a powerful catalyst for change.

The old adage “walk a mile in someone else’s shoes” is about experiencing the events of another person’s life for yourself, so that you can better understand that person. The idea is to learn from other perspectives so you can broaden your horizons and improve both your life and the lives of others. Humans fear what they don’t understand, and knowledge is a time-honored cure for that fear.

Most of us don’t end up forcibly body-swapped with a person whom you might consider your polar opposite, but hey, the year’s still young.

Empathy and its lack thereof is the driving force behind Crosswind, and nowhere is that more evident than in this final (for now) issue. The antagonists of the series notably care nothing for others — and notably, it’s how Vox viewed both Cason and Juniper. It’s why he “crossed” them in the first place. To be fair, Cason was pretty far into that lack of empathy until he became Juniper, and Juniper herself didn’t have the luxury of empathy because she was too busy fleeing from her own life and trying to simply survive.

In a way, Vox crossing Juniper and Cason was similar to what the Romani did to Angel on Buffy the Vampire Slayer. They forced him to suffer the weight of all the pain he caused as a soulless monster. “You have no idea what it’s like to have done the things I’ve done and to care,” he tells Buffy early in Season One, and I’ve often thought that empathy would make for a just punishment for those people who hurt others without hesitation or remorse.

As Gail Simone writes Cason and Juniper’s final showdown with their enemies here, Vox’s curse ends up as a blessing. Juniper’s and Cason’s empathy for each other’s lives has given them the tools they need to survive. It’s shown in every line, every facial expression, every movement by Cat Staggs, who has lovingly guided these characters with her pencil through every step of their journeys.

At one point, Cason and Kelly are prepping for an inevitable attack. “I’m not who everyone thinks I am.” Cason tells Kelly, not quite sure if he’s about to live long enough to tell his sort-of stepson the whole truth. “Who is?” Kelly replies after a beat. That moment of silence before Kelly’s answer says more than the written word possibly could. Simone’s script is powerful, but Staggs is the one who gives it weight.

Another illustration (pun sort of intended) of this is the moment when Juniper confronts her husband. Even in Cason’s body, you can see the years of fear fall from her body like dead autumn leaves. She looks like Cason, she sounds like Cason, but in that moment she is more fully Juniper Blue than she has ever been in her life.

Unfortunately, Cason is still Cason, and being in Juniper’s body doesn’t change that. After the confrontation with Cruz and his crew of assassins, he reverts to type, thinking the only way he can truly have what he’s decided he wants is to destroy what’s in his way. The resolution is a bit quick, but being Juniper has taught Cason the lesson Vox — whom we learn is no good guy himself in this issue’s back matter — wanted both of them to learn in the first place.

Empathy. It’s what connects us to one another. It makes us better people, and it frees us all to become more fully realized versions of ourselves the more we learn of it.

I’m still not sure how Crosswind plays out with regards to commentary on being transgender, and it’s not my place to say. I leave that for non-cis people to interpret. However, transness was not played for laughs at any point during this series, which is deeply appreciated. Sexuality is further blurred, although there really doesn’t seem to be any discourse about its fluidity on-panel. Still, the care Simone and Staggs take with the subtext should be what sets the bar for other stories which include gender and sexual fluidity in their themes.

This has been a fascinating story from start to finish, and the promise of more to come in the future leaves me a very satisfied customer. The first trade comes out next month — grab it if you’ve missed out on the single issues. You won’t regret it.