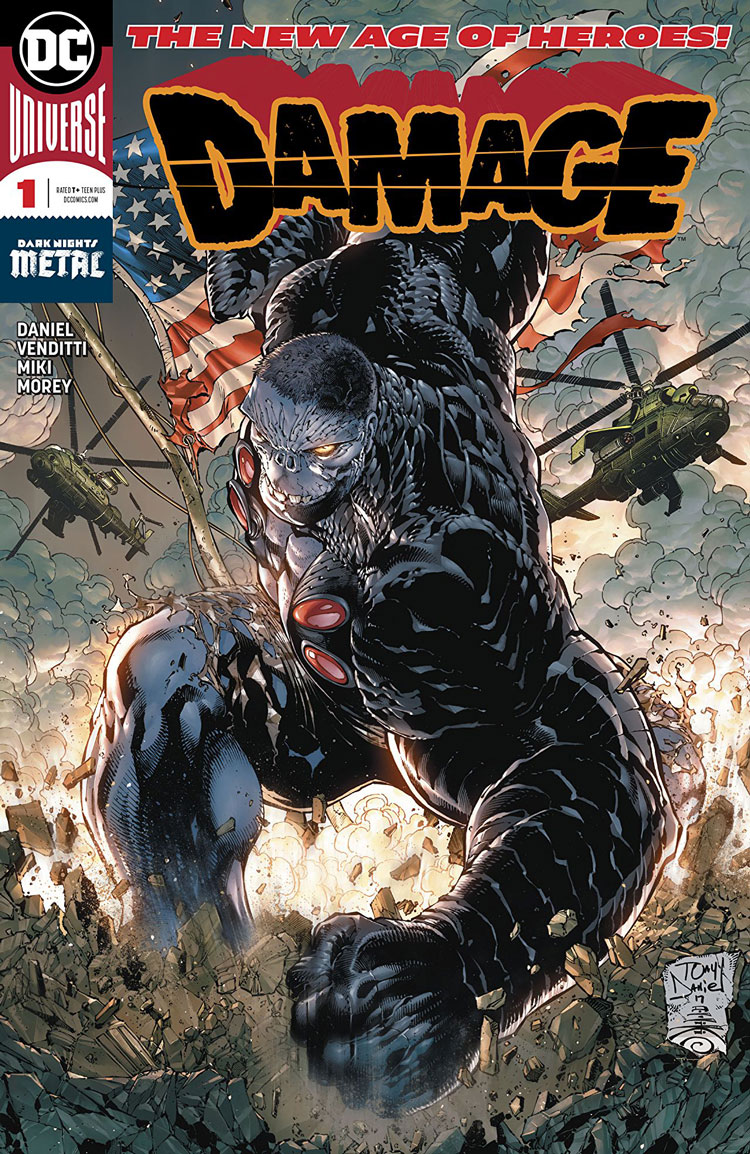 If you weathered the ’90s with DC Comics, you might remember Damage. He… well, he did some damage. He kind of tried to start another big bang… literally. Even if you remember Damage from the good ol’ days before Zero Hour, this introductory issue is still full of surprises.

The first real surprise is that this isn’t Grant Emerson. This is Elvis. His name is Ethan, but Elvis definitely seems like a cool nickname for a ticking time bomb, here to shake up the DCU. He’s a hulked-out Super Soldier, but he is not your run-of-the-mill good guy. It seems that Ethan has some hang ups about his destructive state, and his persona is doing more damage than he signed up for.

Damage #1 ties into DC’s over the top Metal line, in a new wave that will feature comics bringing back some more familiar faces like The Immortal Men and new ones like Silencer. As far as bringing back lost heroes, Damage seems like a strange choice, especially in the current climate.

DC has been doing well with Rebirth and Metal, but the number of books on the shelves every week is steadily growing. Will Damage be strong enough to hold his own title, or will this blow up in his face, like everything else in his life? Only time will tell, but this first issue is not the strongest starting point.

There is simply not a lot to this issue. It is a sparsely narrated origin story, and one that seems too familiar to be captivating. We’ve seen the military monster before, we’ve seen the escape, we’ve seen the inner turmoil of a man raging against his mind and his creators. This is a classic facet of comics, but in this case, it feels more unoriginal than nostalgic.

The entire issue is fairly predictable and unexciting, despite the number of explosions. The most interesting moments are the glimpses into Ethan’s point of view, but the script is dominated by Damage, who really doesn’t have much to say (he’s just an angry bomb, after all.) Hopefully we get a little more of that character development in future issues, because so far Damage is a very flat, one-note character.

The art is the saving grace for this book, and the main reason I would consider picking up a second issue. Daniel’s panel design is dynamic and striking. many of the pages feature a full-page spread with overlaid panels, which essentially allows for twice the art in the same amount of space. Damage himself is a threatening behemoth, but the story doesn’t provide enough support for the depth of the visuals. Though the art is excellent, it seems disconnected from the less dramatic plot line, and leaves the reader feeling a little duped — with all that drama and impact in the art, where was the story to back it up?

The lettering and design in this issue was interesting and detailed, but often distracting. Damage doesn’t have a lot to say, so much of the action was conveyed through over the top sound effects, which included some weird noises and a lot of explosions. Though Napolitano’s lettering was dramatic and colorful, the size, placement, and frequency of the effects detracted from the art at some points and made the story more difficult to follow, as lettering crossed over panels and intruded on the action.

Tomeu Morey’s colors, however, were in line with the drama and impact of the art throughout the issue. The deep, purple-centric palette is a great offset for the explosions and military setting, and the darker tones convey the turmoil blooming between Ethan and Damage. There were some excellent color choices in this issue that were dynamic, bright, and innovative.

Overall, this was a fun read. Damage has the potential to be an interesting player, and a  randy band of anti-villains sneak in toward the end, providing some suspense and anticipation for the next issue. The true problem might simply be that there isn’t enough here to support a solo series. Damage only exists for an hour a day, and only so much can happen in an hour. Will these moments of Damage, coupled with 23 hours of Ethan, be enough to hold readers’ attention?

Without the support of more successful series in the same universe, Damage #1 would likely gather dust on the shelves at most comic shops. However, the Metal stamp promises something awesome, and I will be sticking around to see what it is.

Hopefully for Damage, and DC, this hero manages to bomb in the good way, this time.