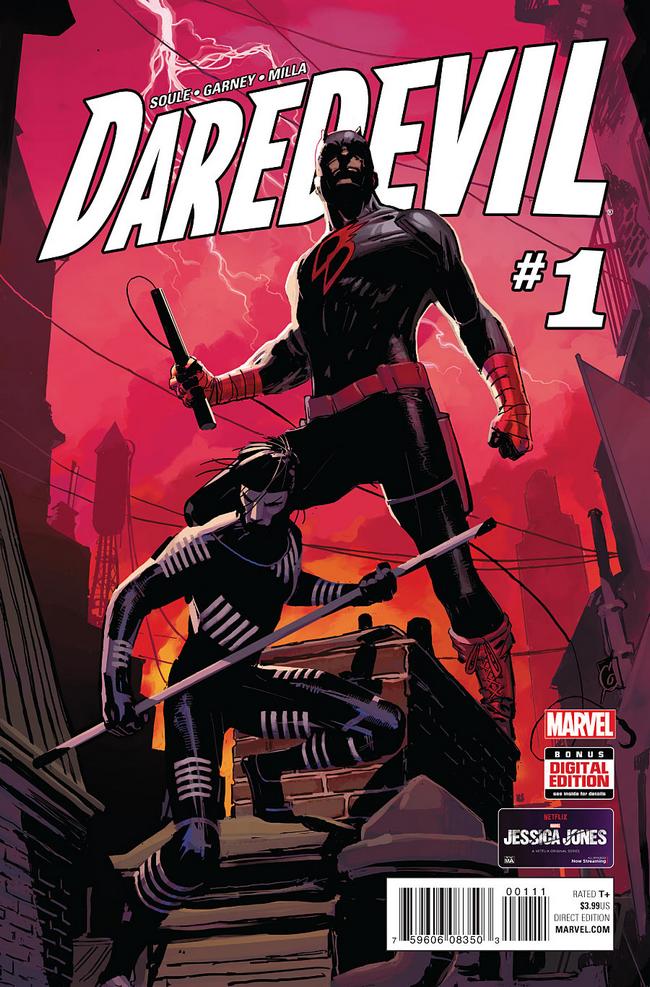 Daredevil does what he does best: diving into danger to help people, while his legal persona puts criminals to justice. Daredevil has a new companion, while an old one calls it quits, as Matt Murdock uses his legal prowess to play the other side of the crime fighting token. A new gang is on the rise, ready to wreak some havoc, leaving Daredevil and Matt with a new challenge to face in both of their worlds.

Charles Soule’s Daredevil is a great jumping on point for any new reader, especially those intrigued after watching the Netflix series. Soule’s writing captures some core elements of Daredevil and takes us back to some critical and integral characterization. Matt’s life as a costumed vigilante is juxtaposed by his life as a disabled lawyer, creating important distinctions and cover stories for each. We see worlds that are equal lawyer and crime fighter, and they will most certainly come to a head as the series progresses.

Look, I love color, but I also have a fond appreciation for earthy monotone when appropriate. Ron Garney and Matt Milla’s art is a sight to behold, conveying Daredevil’s existence as a sort of real urban myth in a city that glitters and never sleeps. Matt’s world isn’t Tony’s or Carol’s or Steve’s; he’s in the trenches in more ways than one. The sharp, pointed lines and the muted, dark environment provide some excellent atmospheric play in this issue, something I think is important for establishing how Daredevil is not the same as the rest of the Marvel universe.

I’m excited for the appearance of a new character and his role as a new figure in Daredevil. I hope he continues to play an integral role in helping Matt fight New York’s criminal underworld and remains a diverse figure in the 616. While he only showed up briefly, it was great to see his interaction with Matt, as well as Matt’s obvious trust in him. He has the makings of a great character and he definitely deserves to stick around.

While someone didn’t show up as much as I had hoped or wanted, I was definitely satisfied with Daredevil #1. It captured some of the elements that make Matt who he is as a costumed crime fighter and does not betray his roots or his environment. Everything, from the writing to the art, fits the tone and story of this first issue. There’s some great stuff in store for many facets of Matt’s world, and I think this series is certainly in good hands.