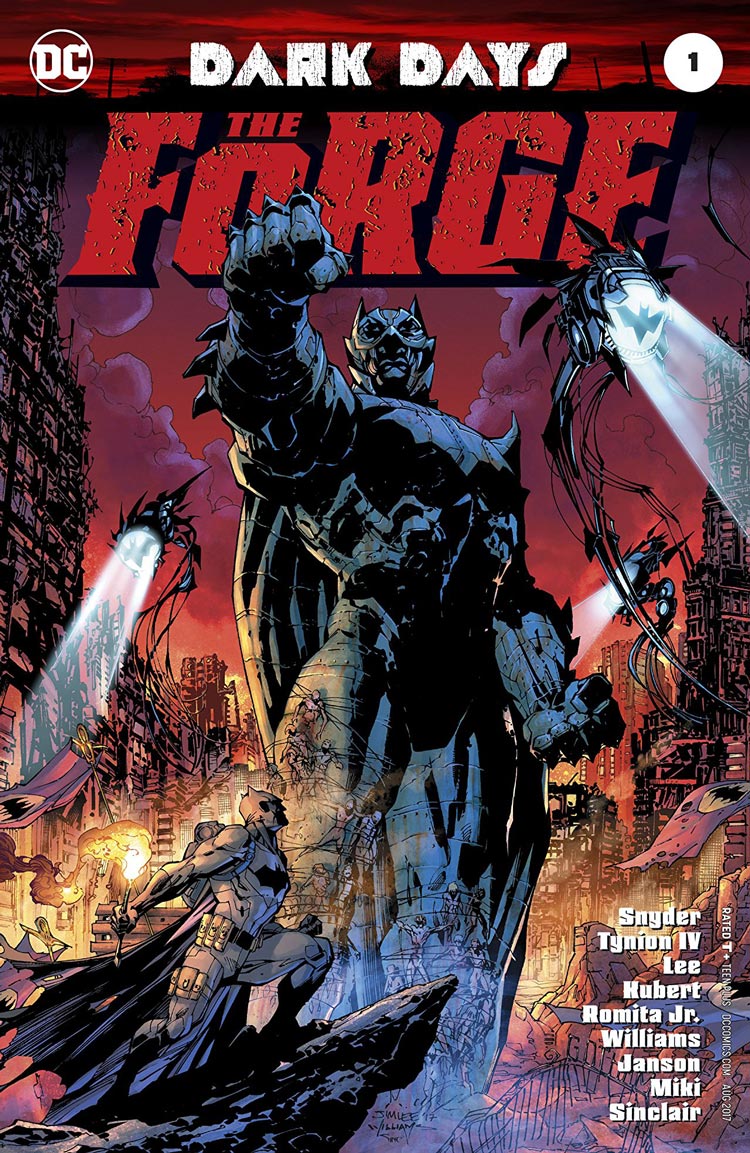 Dark Days: The Forge #1 hits new comic book racks this week, and it packs a punch. Dialed up to thirty pages, co-written by Scott Snyder and James Tynion IV with art from Jim Lee, Andy Kubert, and John Romita, Jr., inked by Scott Williams, Klaus Janson, and Danny Miki (not necessarily respectively), colored by Alex Sinclair and Jeremiah Skipper, and lettered by longtime Snyder collaborator Steve Wands, this comic stretches from the Batcave to the Fortress of Solitude and back.

Dark Days: The Forge #1 opens with Andy Kubert taking up the family business and drawing the ancient Egyptian origins of Hawkman (or Khufu as he was known back then) before jumping into the present day, as Batman’s machinations begin to splinter.

Snyder and Tynion only give readers little crumbs to work with to sort through the mystery of this comic. Some of those crumbs are found in the Bermuda Triangle, some on Mogo, some from “The Campus” beneath Philadelphia, a bit on the Moon, and some notes composed in Carter Hall’s journal with italicized text from Wands. Some of those crumbs fall at the feet of characters like Lady Blackhawk, Immortal Man, Mister Terrific, Mister Miracle, the aforementioned Carter Hall Hawkman, and even Batman’s black ops team. There’s a bit of smoke and maybe even some dust around some of those bits, but there’s enough Easter eggs, hints for things to come, and lots of interesting items that have me fired up for this summer’s Metal event.

The art is all over the board, with each of the three artists turning in brilliant work, as well as panels that fall below my expectations for the talent associated to them. Thankfully the remarkable outweighs the subpar, and even goes so far as almost eclipse the less satisfying drawings. Some may be attributed to penciller-inker combos that don’t normally jibe, but whatever the case, Dark Days: The Forge #1 doesn’t quite achieve the marks needed to be considered one of 2017’s prettiest books.

Sinclair and Skipper fill the comic with bold, unreserved colors – the brightest from the box with the sharpest points now dulled from extreme pressure. For some characters that works. Green Lantern, for instance, should always glow, but Duke Thomas’ yellow suit doesn’t seem like it should shine equally bright. The one Easter egg I’m not mentioning by name – you’ll know when you see it – should be bright, but Mister Terrific’s t-mask being bright red makes him look like an alphabet soup-themed serial killer. Again: good and could-be-better. Thankfully, however, Hawkman, Mister Miracle, and Aquaman are accounted for in the pages of Dark Days: The Forge #1 to level out the overall saturation.

As for the story, well, Snyder and Tynion give us some teases, and definitely set this story up to leave readers wanting more. They also do a nice job of rooting through the DC Universe sandbox to get some buried toys out. And it also looks like maybe they’ve even brought a few toys of their own. The end result is a nice opening chapter – no, a nice prologue to what promises to be a universe-altering event.

I was in my early teens when I discovered comic books could have crossover event stories, thanks to Crisis on Infinite Earths. I can’t tell you the exact date I got it, but I can tell you that I started reading Crisis with Crisis on Infinite Earths #5, went back to the beginning, read back to #5 and then moved forward. I’m not sure if it was right-place, right-time, or if the series just found the right buttons in my brain, but I do know George Pérez’s art struck me right in the face and showed me what event comics can and should look like – cast of thousands, but noteworthy stars propelled to the foreground of sprawling landscapes and dazzling effects.

Crisis became a must-read for me, and continues to be. It’s what I like to refer to as a “fan comic.” Growing up in a house without air conditioning, the best way to spend the sweltering part of Midwest summers is in a pool. If said pool is unavailable, laying as still as possible comes in a close second. If you can do that in front of a box fan, shielding the pages from blowing with your body, all the better.

Dark Days: The Forge #1 feels like a fan comic. Granted I read it on my laptop, in a chair at a table, but I did have the fan going, and it felt right. Yes, it is VERY Batman-centric, but so is the entire DC Universe nowadays. If you’re going to do a explosive saga, then you better pack your biggest guns. Guns don’t get much bigger than Snyder, Lee, Romita, Jr, and Kubert. With Hawkman as the apparent lynchpin in this story, Dark Days: The Forge #1 got my attention. I’m now ready for some metal, especially as summer draws near and the Michigan days start climbing into the 90s.