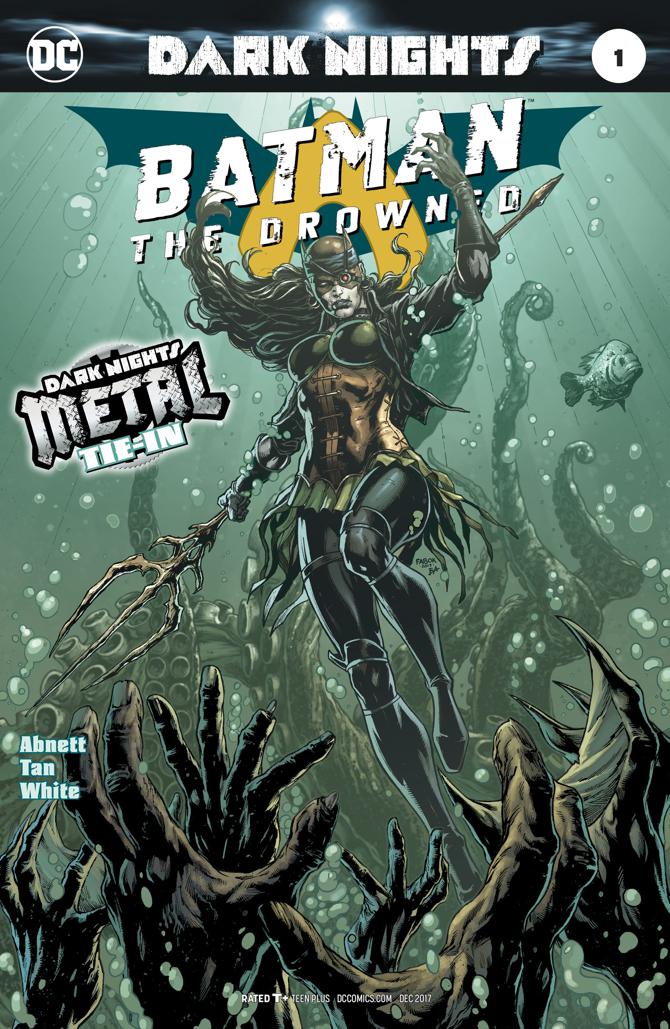 The wretched Knights come to the water as sea-scribe Dan Abnett teams with a group of veteran artists to unleash a menacing Batwoman the likes of which comics has never seen.

Abnett writes the hell out of this comic. His strong work on Aquaman carries through into this one-shot that tells the tale of an Aqua-bat who unleashes a watery fury on Amnesty Bay. In a similar manner to the other one-shots that have come so far, the bulk of this issue is looking at this horrific Bat’s back story while she eviscerates everyone around her. Abnett writes a compelling story here, with great dialogue and solid pacing. You can hear the same mastery of the ocean realm in his writing, like he is writing a reverse-Aquaman here, but with the drive an intellect of a Wayne. He balances all the difficult tasks of this issue very well, delivering a contained story that reads well as a one shot but also builds into the larger narrative of the Dark Nights.

On the art front, it is a bit more of a mixed bag. Phillip Tan, full disclosure, has never been one of my favourite artists. His work does not fail the story at any point, but I did prefer Kirkham’s work. White and Prianto’s colour work is the star of the show here, though, as their work is absolutely dazzling at several points in this issue. The water is a creature, a force to be reckoned with, and absolutely dumbfounded me at many points. The brilliant colour work is what gelled with Abnett’s words best on the art front and really made this issue work.

The Drowned is easily one of my favourite of the one-shots thus far. Abnett is on fire while writing the sea, the pencilers pull their weight and the colourists make the visuals soar in this rock solid one shot.