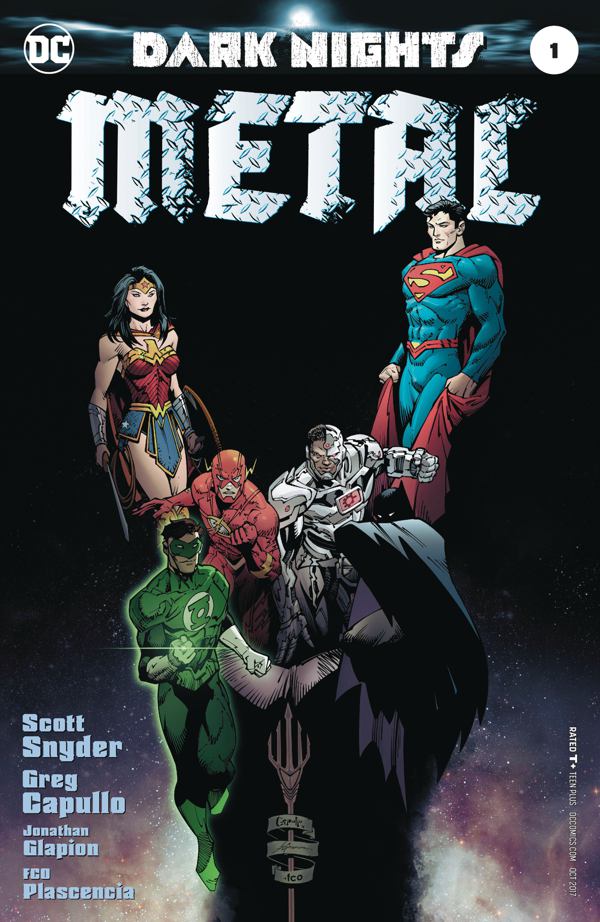 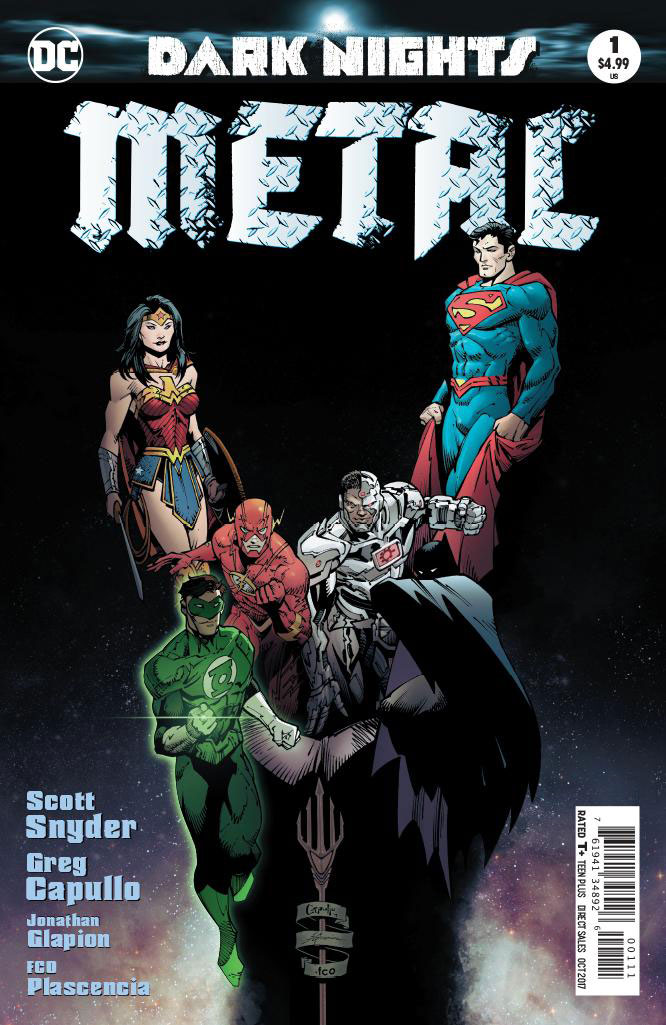 Following on from Dark Days: The Forge and The Casting, Dark Nights: Metal #1 futher reveals the Dark Multiverse and readies to unleash it upon the heroes of the DCU.

Dark Nights: Metal follows Batman and the Justice League (with Hal Jordan replacing Simon Baz and Jessica Cruz as the representative of the Green Lantern Corps on the team) as they investigate the mysterious appearance of a mountain in the middle of Gotham City. That investigation leads them to Blackhawk Island, where the mysteries of Nth Metal and its ancient history are expounded upon and Batman learns more about the matters he investigated in Dark Days.

Metal #1 is a supremely well-executed comic. It opens with a brisk and engaging action sequence before segueing into a story that is mostly exposition and narration. Yet it never feels weighed down by all the telling-rather-than-showing. It introduces a lot of comic book nonsense, but does it with precisely the correct tone: Taking itself totally seriously, without a nod or a wink in sight. It never pretends that it’s better than its material. It never looks at the reader and says “Yeah, this is stupid, but what are you gonna do? Comics, am I right?” That lack of bathos is the key to Metal’s success; the creators love the material for what it is, and that give the reader permission to enjoy the nonsense on its own terms.

Metal is perhaps most interesting as an act of aggressive, enthusiastic continuity. Most of the thrills to be had reading Metal #1 come from the reappearance and reconfiguration of characters and concepts that haven’t been seen in years in the main DC Universe. It dangles the tantalizing prospect that old, beloved ideas might return in a form that’s fresh and new, and it does it while weaving a skillful retelling of the history of the universe, rewritten to incorporate new concepts and lore that will presumably be essential for the remainder of the series.

At this point, I have to take a step back and talk about who I am as a reader of this book, because in this case it’s relevant. I’m a person who likes DC comics, who’s read DC comics for years, who’s familiar with characters and backstories and DC lore that stretches back for decades. As that reader, Metal #1 did everything right to activate the part of my brain that loves continuity, that has affection for these characters, that wants to see fresh takes on old material. Every page-turn of this comic was a thrill for me, as seemingly every other page brought new revelations that dug further into the history of the DC Universe.

At the same time, I can’t help the niggling feeling that this is all a sort of corporate sleight of hand. The characters I loved disappeared for a few years, and now they’re pulled out of a top hat and I stand and applaud. If you’ve never seen these characters before, if you haven’t read the old comics, if you’re just walking in mid-trick, there’s no particular reason you’d be impressed when the rabbit gets pulled out of the hat. I can’t put myself in the shoes of someone approaching the DC Universe with wholly fresh eyes, who doesn’t have the set of strings waiting to be skillfully plucked that I do. It’s not fair to judge this book from a perspective that I don’t have. It is, however, worth pointing out that a lot of the visceral joy I derived from this comic came from my familiarity with DC continuity. It’s still a well-executed comic; the creative team, to return to my earlier metaphor, are very skilled magicians. But familiarity with DC canon is what elevated this comic, for me, from merely enjoyable to sublime.

Whether you’re familiar with the background or not, though, Metal’s meat is pure continuity building, and it’s the best kind of retroactive continuity: The kind that is in conversation with and builds upon the work of previous creators without throwing their work away, adding texture and depth to the history of its universe. In particular, Metal builds upon the mythos established in Grant Morrison’s Final Crisis, Batman: the Return of Bruce Wayne, and Multiversity. Metal adds to these previous works without diminishing them; we learn that Bruce Wayne’s trip to the dawn of the human race after Final Crisis drew the attention of Lovecraftian horrors from the Dark Multiverse, a black mirror of the multiverse, shown in Multiversity, that’s been filtered through the lens of dark matter.

It’s fitting that Metal #1 comes out a week after the debut of Tom King and Mitch Gerads’s Mister Miracle, because Metal‘s handling of dark matter is delightfully Kirby-esque. It takes a Real Life Science Concept, dark matter, sprinkles in a generous supply of actual science facts, then confidently, audaciously spins it from there into Comic Book Science. If Mister Miracle was an homage to the serious ideas that underlay Kirby’s New Gods, Metal feels like the best parts of the fun-loving, free-wheeling super science found in Kirby and Lee’s Fantastic Four.

The art works well throughout, with dynamic panelling and staging of scenes to keep readers engaged even in the extensive dialogue-heavy portions of the issue. The art really shines, though, in the action scene that opens the comic, in which the Justice League fights a set of mechanical monsters in Mongul’s arena. An incredibly elaborate setpiece that could have been confusing ends up exciting and easy-to-follow, drawing the reader rapidly from one panel to the next without need to pause and figure out exactly what’s happening. The color work is adequate, if somewhat unremarkable, though in a nice touch softer colors are used for photographs to lend them a faded, aged quality, while bright colors are used to contrast with dark backgrounds to good effect. Particularly striking is the use of purple lightning in the cloud-darkened skies above Challenger Mountain.

DC Metal is an excellent start to what promises to be a fun event. It’s unpretentious in its earnest love for the comic book universe it gleefully expands upon and skillfully weaves together old concepts and new ideas into a seamless, exciting whole.