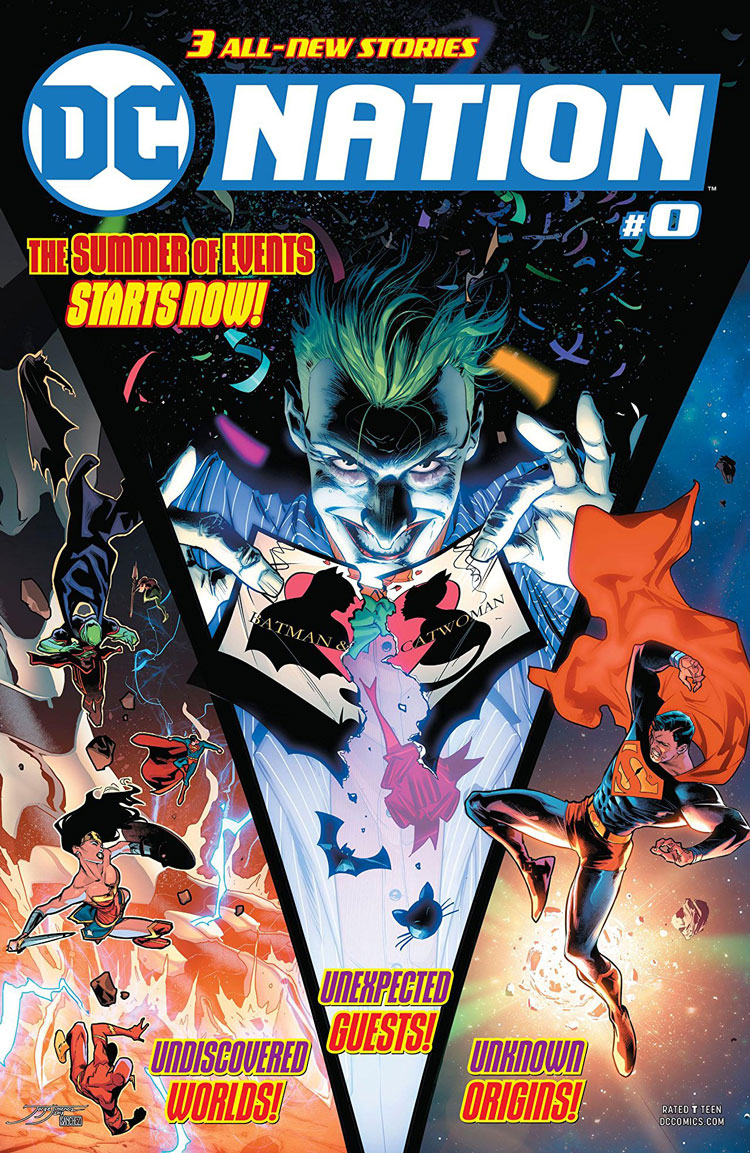 DC presents three stories from superstar creators that serve as both samples and preludes of events to come this summer.

Let’s get something out of the way quickly; this issue is an astounding consumer value proposition. Even if it were two bad stories and a mediocre one, it’d be hard not to recommend it when it costs a quarter.

Fortunately it’s much better than that, delivering two fantastic stories and one that is, if nothing else, beautiful to look at. King, Mann, Bellaire, and Cowles deliver a vignette as part of the long-standing Batman/Catwoman engagement arc that specifically sets up events to come in June; Bendis, García-López, Vines, Sinclair, and Reed prepare us for Man of Steel, which starts at the end of May; and Snyder, Tynion, Williamson, Jimenez, Sanchez, and Andworld Design give us a taste of the No Justice event that begins next week. All of the stories are a brisk 8-12 pages.

The Batman short has the Joker holding a man hostage as they await the mail, which Joker believes will bring his invitation to Batman and Catwoman’s wedding. It’s unique among the three in that it tells a fairly complete and self-contained story, satisfying in-and-of-itself, while being part of a larger plotline, while the other stories feel much more like prologues, beginnings without endings.

The story does a great job drawing out the tension of the hostage situation, with the Joker responding to every attempt by the hostage to beg, bargain, and plead for his life with non-sequitur jokes. The Joker draws the reader, and his hostage, into his own bizarre internal logic, only to thwart that logic and punish the hostage for thinking there’s any method to his madness.

There’s relatively minimal action, but Mann and Bellaire’s art draws the reader into the conversation between Joker and victim. Intricate facial expressions with exquisite detail and shading help sell the excruciating tension as the pair await the arrival of the mail and the invitation that seems sure not to arrive. All told, it’s an excellent and brief example of a Joker story, and gives the unfamiliar reader a good sense of what King’s Batman run is like in case they want to dive in for the nuptial event that’s just now beginning.

The Superman short is somewhat less successful. In it, Perry White narrates recent events at the Daily Planet to an audience of reporters, while Clark Kent relates a story about Superman foiling some arms smugglers in Central America. The conversation between White and Kent is both wordy and abstruse. It took a couple of readings to realize that Perry is intended to be poking at something uncomfortable to Kent, but there’s no way of knowing this because the reader is left intentionally in the dark. It eventually comes out that Lois Lane is a tender subject for Clark. Have Lois and Clark broken up? Possibly! It’s unclear and we’ll have to read Man of Steel for details.

There’s a bit of a cheap trick here, jumping the story ahead five minutes and creating a sense of mystery about what happened in the five minutes we jumped ahead. But it isn’t a mystery to the characters, it’s just a mystery to the readers, from whom information has been intentionally withheld. So we’re supposed to get excited for the coming series, in which the bit of information that’s been withheld will, presumably, be revealed. It creates disorientation, but, at least so far, fails to use that disorientation to tell an interesting story. It does engender, on a basic level, some curiosity about the pseudo-mysteries it sets up, but does so without inspiring confidence that there’s an actually interesting story to come.

On the plus side, the art is fantastic. Comics legend José Luis García-López supplies pencils and brings his iconic style to the sequentials in this story. The posing for both action and conversation is vivacious and dynamic and the facial expressions manage both a cartoonish depth of feeling and realistic detail. These pages are truly a delight to look at, even if the story itself is a bit of a let-down.

Finally, there’s the Justice League story, which sets up this month’s No Justice event and the new Justice League books to follow. Like the Superman story, this story skips ahead in time and serves as a prelude rather than a self-contained story. In this case, though, it has skipped straight to the action and given us a fun taste of what the No Justice event, presumably, has in store: big widescreen action with multiple oddball teams and amazing art.

The art deserves particular attention because it’s breathtaking. Jimenez brings splash page after splash page with dynamic offset panels that burst from the page with complicated action scenes that beg to be lingered over. The art is both sprawling and intensely detailed, and Sanchez’s bright-to-the-point-of-glowing color work complements Jimenez’s work perfectly, making characters pop out of the page and drawing the reader’s focus.

The story itself is a bridge, and maintains the momentum coming out of Dark Nights: Metal and leading into Justice League: No Justice. Various DC heroes and villains have split into four teams, Entropy, Wisdom, Wonder, and Mystery, and fight hordes of aliens on the planet Colu in an attempt to halt the march of four Omega Titans toward Earth. It is, in every sense, Comic Book Nonsense, but it’s the best kind of nonsense, the kind that entertains with its enthusiasm and cares enough for you to take it seriously, but not so much that it gets tedious.

In all, DC Nation #0 is a gorgeous book, showcasing three highly distinct but equally sumptuous art styles. Its three stories each preview what’s to come in the next few months from DC Comics and, to greater or lesser degrees, entice the reader to learn more. While the Batman story is the only story that can be called satisfying in and of itself, all the stories have at least some merit and it’s well worth your time to check out and see what DC has planned for the summer.