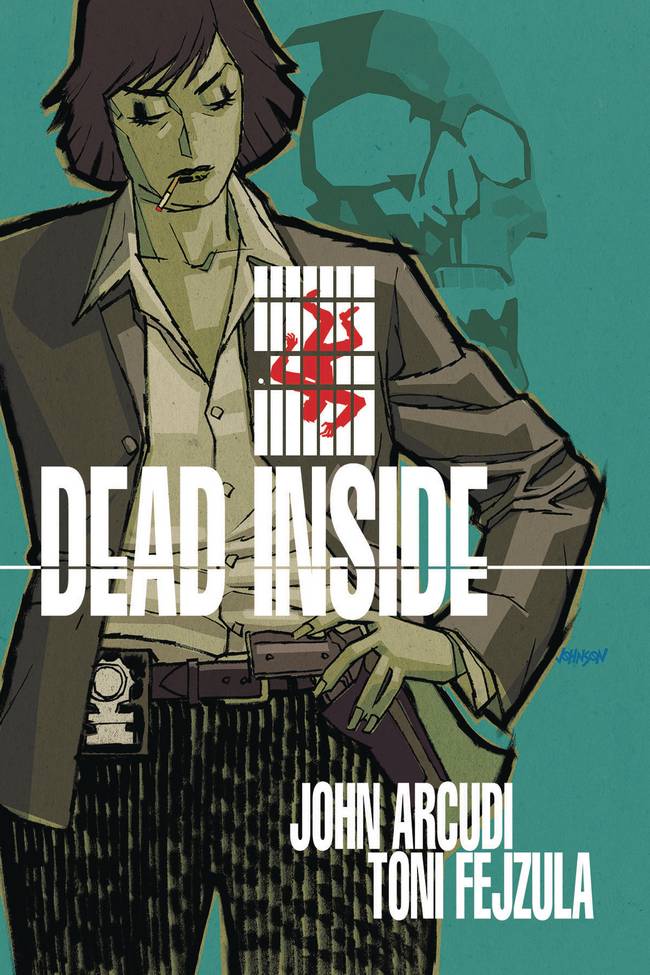 A murder. A suicide. A detective. A jail. The perfect ingredients for a brand new crime and mystery series from Dark Horse Comics, written by suspense/horror favorite John Arcudi, illustrated by the flavorful Toni Fejzula, with colors by Andre May and Joe Sabino letters.

Dead Inside opens with a murder/suicide inside a relatively low-level county jail. Jail investigator, Detective Linda Caruso is called on to process the bodies, but she suspects something far more nefarious than the simple crimes that seem to have been committed. Try as she might, however, Caruso appears to be up against a monster of a conspiracy with trouble brewing inside the jail.

It’s been a little while since I picked up a crime book, but man oh man am I glad I grabbed this one. The action starts right off, splayed across the page like, well, a damn bloody crime scene. The pacing of this story really builds the tension as Caruso is faced with challenge after challenge in pursuit of justice. It’s frustrating watching her try to just do her job, but be stopped in several different ways by different people. I really appreciated this style of story-telling, a style where we get to spend all of our time with Caruso and watch her closely as she interacts with other characters and slowly unfolds the challenge of the case in front of her.

The dialogue in this story is well-written. The characters are sarcastic and fun to listen to, but the story also comes out strongly through the interactions between them. We learn a lot about the job and Caruso almost entirely through the dialogue sequences, with no inner-monologue from Caruso. This helped the story feel natural in its progression. We know what Caruso knows, and we only learn about her what she seems to share with others. Arcudi has a strong grasp on this technique, making each new page a treasure trove of information.

Toni Fejzula absolutely sings in this story. I was previously familiar with his work on Greg Rucka’s Veil, a mini-series that was bizarre in its story and unique in its art. Fejzula’s style is instantly recognizable; he utilizes a sharp contrast between large swaths of open illustrations with dark shading that is scratchy, yet precise. The result is a haunting portrayal of twisted characters, their designs unique and easily discernible from one another. The backgrounds are rich with texture, providing detailed landscapes for the characters to interact with. Fejzula is a perfect fit for this story, enriching what could be mundane in nature to make it otherworldly. There’s no better complement to Fejzula’s powerful linework than Andre May’s colors. The pages are bright and teeming with life, providing bright splashes of the absurd to each page, while keeping the palette dark and ominous. Joe Sabino, as well, provides work that does nothing but add to the story, capturing those numerous bouts of dialogue in ways that leave plenty of room for the illustrations.

Dead Inside #1, while somewhat reliant on jail/prison tropes, seems to provide a crime/mystery/thriller that’s bound to push you to the edge of your seat with future installments. This issue set-up the world and challenges Caruso will no doubt continue to face, but also promises a winding trail to resolution. I thoroughly enjoyed the tenacity of the leading lady, and I’m looking forward to seeing her kick some investigatory tush in later issues. If you’re on the prowl for a murder mystery that grabs onto you and doesn’t let go, make sure to pick up Dead Inside #1.