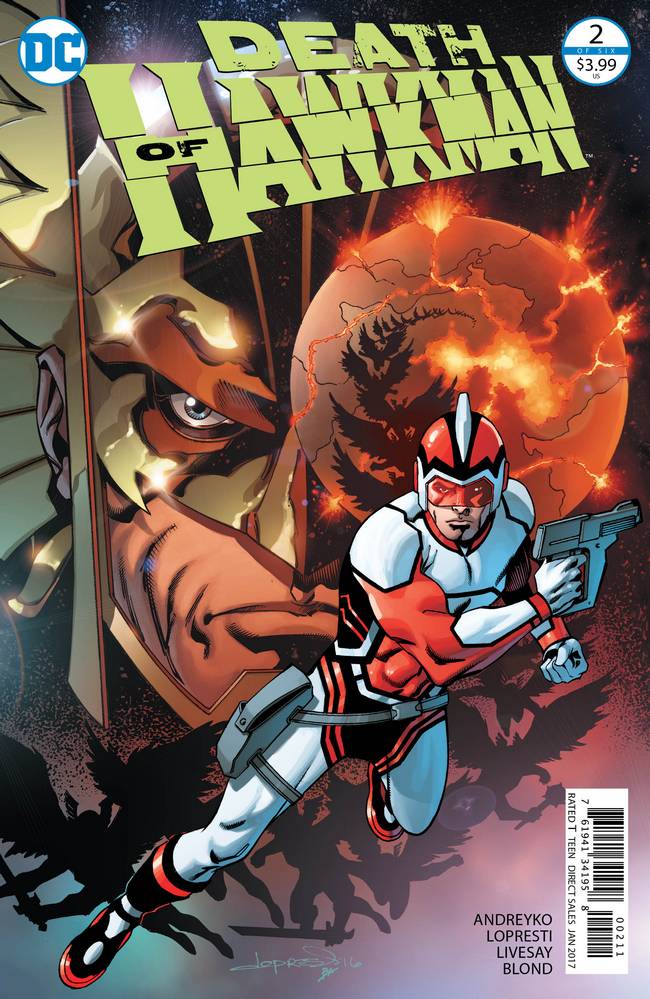 Accused of being a traitor to his people, Adam Strange forms a fragile alliance with Hawkman as the pair seek to learn who is launching attacks on Rann.

Adam Strange arrives on Rann in the midst of chaos in the wake of the suicide bombing in the first issue. He’s pulled into investigating who the responsible parties could be, while Rann cries out for vengeance against Thanagar. Meanwhile, in a welcome change from last issue, we get glimpses of Hawkman on Thanagar going about his life as a rogue cop who doesn’t play by the rules.

The comic is briskly paced, with a good mix of action, comedy, plot development, and character moments. The writing is solid, though often veers into the cliché. As mentioned above, Hawkman is every vigilante cop you’ve ever seen in a cop movie, though his wings and bare chest do add a novel element. Adam Strange’s investigation amidst cries for blood feels like a photocopy of an airport bookstore political thriller. Even the broader context of war between Rann and Thanagar is somewhat shopworn; this is the third miniseries DC has published about conflict between Rann and Thanagar in the last eleven years.

Still, the series finds a new angle on the Rann-Thanagar conflict that feels relevant to our current, turbulent times. Multiple times while reading I found myself thinking a plot point was unrealistic, then reminded myself of a precise real-life analog. It manages to stay relevant without ever becoming didactic, and even if the plot seems familiar the story is told entertainingly.

We get a lot more of Hawkman in this issue than we did in the first, and though his story doesn’t tie into the main plot yet the interludes with him are fun. We see an angry, lonely man who misses his life on Earth, which compares interestingly to Strange’s frantic quest to return to Rann in the first issue. Though they clearly have very different temperaments, we can see why Strange and Katar get along so well; they’re both men of two worlds who prefer their adopted worlds to their home planets.

Aaron Lopresti’s art is well done, with elegant science fiction cityscapes and dynamic figures that give a strong sense of action, even in conversational scenes. There’s a particular emphasis on male musculature, particularly Hawkman’s, that’s quite welcome. Hawkman is one of few comic book men who is often drawn half-naked, and, indeed, appears fully naked in this issue. He’s also one of few comic characters consistently depicted covered with body hair, and Lopresti does an admirable job with Katar’s muscular, hairy form in this issue. Livesay’s thick inking works well with Lopresti’s pencils, enhancing the characters’ sense of life and expression. Blond’s color work is, as always, fantastic, bright yet detailed and gradiated to add depth to the art.

Death of Hawkman #2 significantly picks up the pace compared to the first issue and promises an interesting series going forward. While a tad cliché, the story is well-told with superb art.