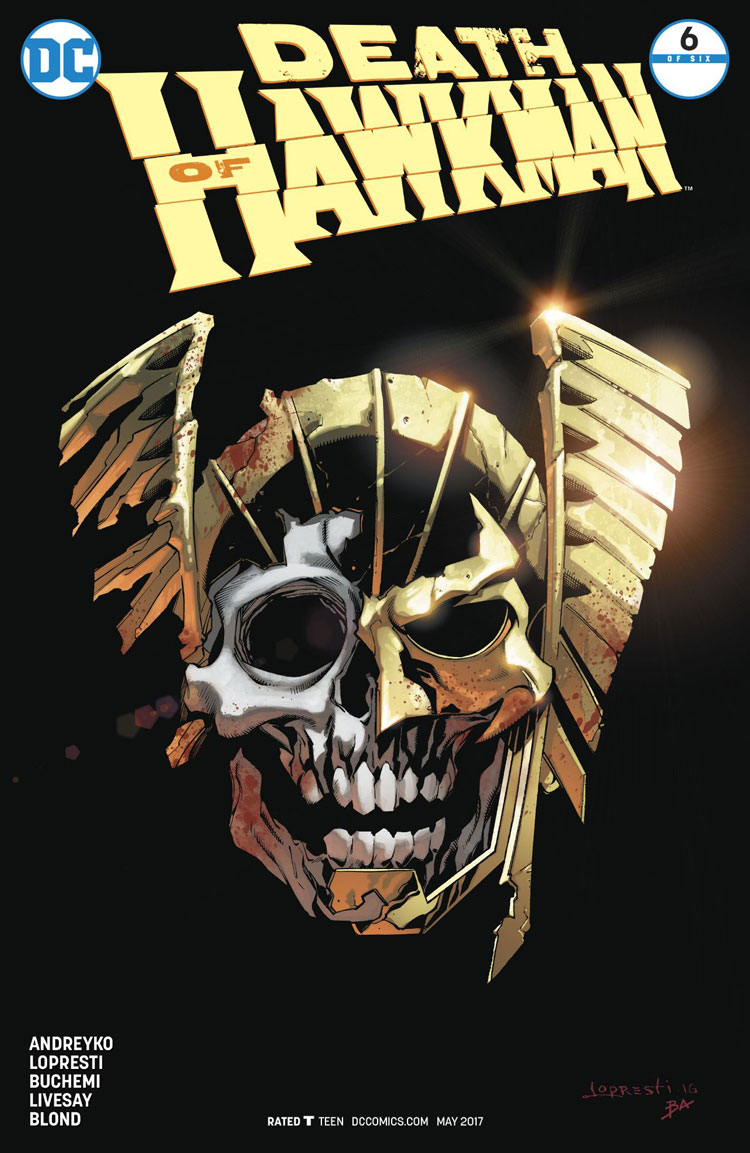 To this point, Death of Hawkman has been a demonstration in frustration: a solicited title change, bouncing story timeline, cover art that is incongruous to the interiors, and the underlying use of telepathic thrall as a plot device to mask any and all inconsistencies. That doesn’t even scrape the surface of the rumors for what is to come of the legacy of one of DC Comics’ oldest icons.

And yet, it serves its purpose. By the end of the issue, Hawkman is dead. Sorry if that spoils things for you, but it’s right there in the title after all, and this is the final issue of the six-part miniseries.

But this is Hawkman. You remember: Hawkman the superhero whose power is flight and whose curse is reincarnation. He says it right here in Death of Hawkman #6: “See you in the next life.” And that may be the most poignant piece of dialog Andreyko gives readers in this finale that pits Hawkman and Adam Strange against Despero.

There are spots throughout this series (but not as heavily in this issue) where Andreyko’s script isn’t as strong as I’ve come to expect from the writer, but he makes up for that in this issue. It’s nowhere near perfect, but it does capture the voice of Katar Hol facing a battle he cannot win and using his own confidence to bolster those around him.

The art, like the story itself, is at times frustrating, despite trying to be more. Lopresti has a knack for detail, but a penchant for some obtuse panel choices. He uses circular panels six times in this issue, each time breaking characters out of the flow of the story, sometimes to great benefit, other times like a new driver testing brakes on a brand new car.

Some other panels are almost boring in their simplicity while other pages have panels that feel (and due to their triangular shape) look wedged in. And the Zeta portal design is painfully uninspired. It’s a circular ring driving into the ground (like the portals we’ve seen in the Big Hero 6 movie and The Flash TV show and so many other places), and at one point it has power crystals tacked onto the top of the arc.

Again, not awful, but I know better is possible.

Likewise on the coloring. Blond uses some shading, dodges, and burns, but nothing really pops. Blood is either bright green or bright red. Add in Despero’s hot pink skin and the green glow from a Green Lantern and the saturation of color on every page all but forces Blond to make the backgrounds gray, brown, or white.

In the midst of DC’s resurgence via Rebirth, Death of Hawkman seems like a New 52 leftover, out to destroy for sensationalism, clearing chaff and trying to force new growth that simply doesn’t have enough root to take. The character arcs in this series are flat. The consequences appear more shallow than the story wants us to believe they are, and the ending is, well not even remotely satisfying.

I have no doubt Hawkman will come back at some point, after all the current line-wide publishing event is still Rebirth, and that’s a bit of the Winged Wonder’s specialty. In the meantime, I hope DC learns a bit from their mistakes, studies what has made Hawkman successful (Geoff Johns’ and David Goyer’s “Return of Hawkman” in JSA, Tony Isabella’s and Richard Howell’s Shadow War of Hawkman) and what makes him special (Legend of the Hawkman from Ben Raab and Michael Lark) before trying to bring him back again.

Who knows, maybe given her recent appearance in the New Talent Showcase, Hawkgirl (please, Hawkwoman) will take to the skies again. After all, her brand has greater recognition among dedicated and casual comic book fans given her membership in the cartoon-based Justice League.

Whatever does happen, I hope DC finally gives Hawkman, Hawkwoman (or Hawkgirl), and their legacy the respect it deserves.