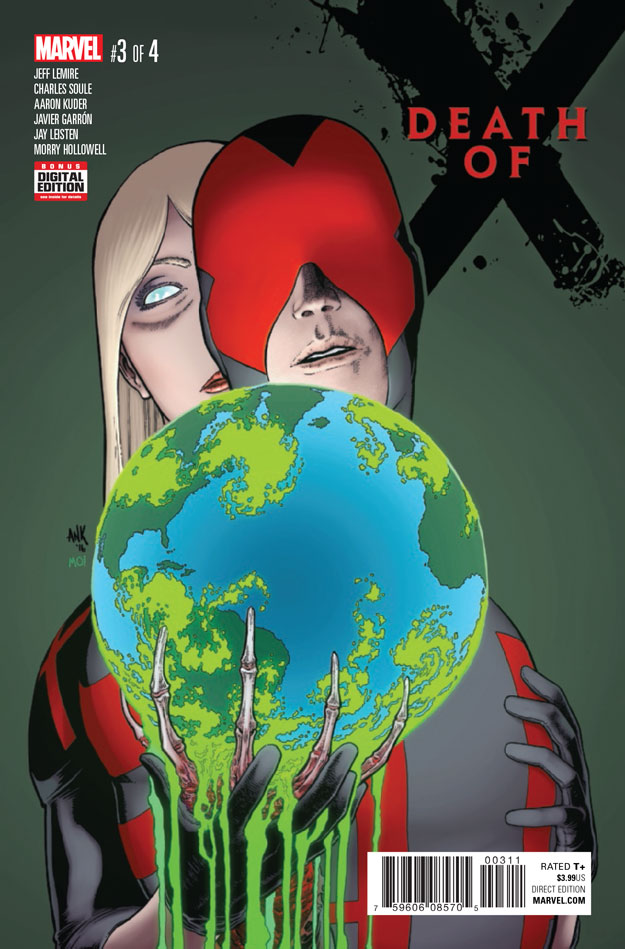 I’ll admit that, up to this issue, I’ve been on the fence about Death of X. The issues haven’t been poorly crafted, but part of me is sick of pain-in-the-ass Cyclops fighting with other heroes. This is no knock on Soule, Lemire, Kuder et al, the character just isn’t in a place I personally care for. So, up to this point, I’ve been keeping up but not entirely fired up.

In particular, how Soule & Lemire handle the youths in this issue is very strong. Their hot tempers and excitement about their new powers is juxtaposed by their inexperience and readers get to see, first hand, how dangerous these untrained cannons can be. Is it the best idea to have a person use their powers for the second time in their life to knock out a bunch of people? That’s pretty debatable and the interactions between the X-Men and the young Inhumans, with Crystal in the middle, were fantastic. This part of the issue felt very organic and tempered the pages with Emma and Cyke’s machinations to make this event feel different than AvX, etc.

Kuder & Garron deliver strong pencils and their styles match up nicely. The aforementioned conflict between the Inhumans and X-Men is electric, and the tension between the groups leaps from the page. The artists both handle the naivete of several characters very well, showing how powerful these kids are without having a damn clue what they are doing. Magneto is a battle hardened warrior with a steely gaze and overall, they handle this massive cast nicely. The colour work by they army of colourists is cohesive, especially when you consider the number of players involved. I enjoyed the subtle story twists in this issue and the art team really sold them well.

Death of X #3 is the strongest chapter in this four part series and I’m excited to see how this transitions fully into IvX. Soule, Lemire, Kuder, Garron and the rest of the crew have my attention…here’s hoping issue #4 sees an Inhuman giving Cyke the business end of a new power for a few pages.