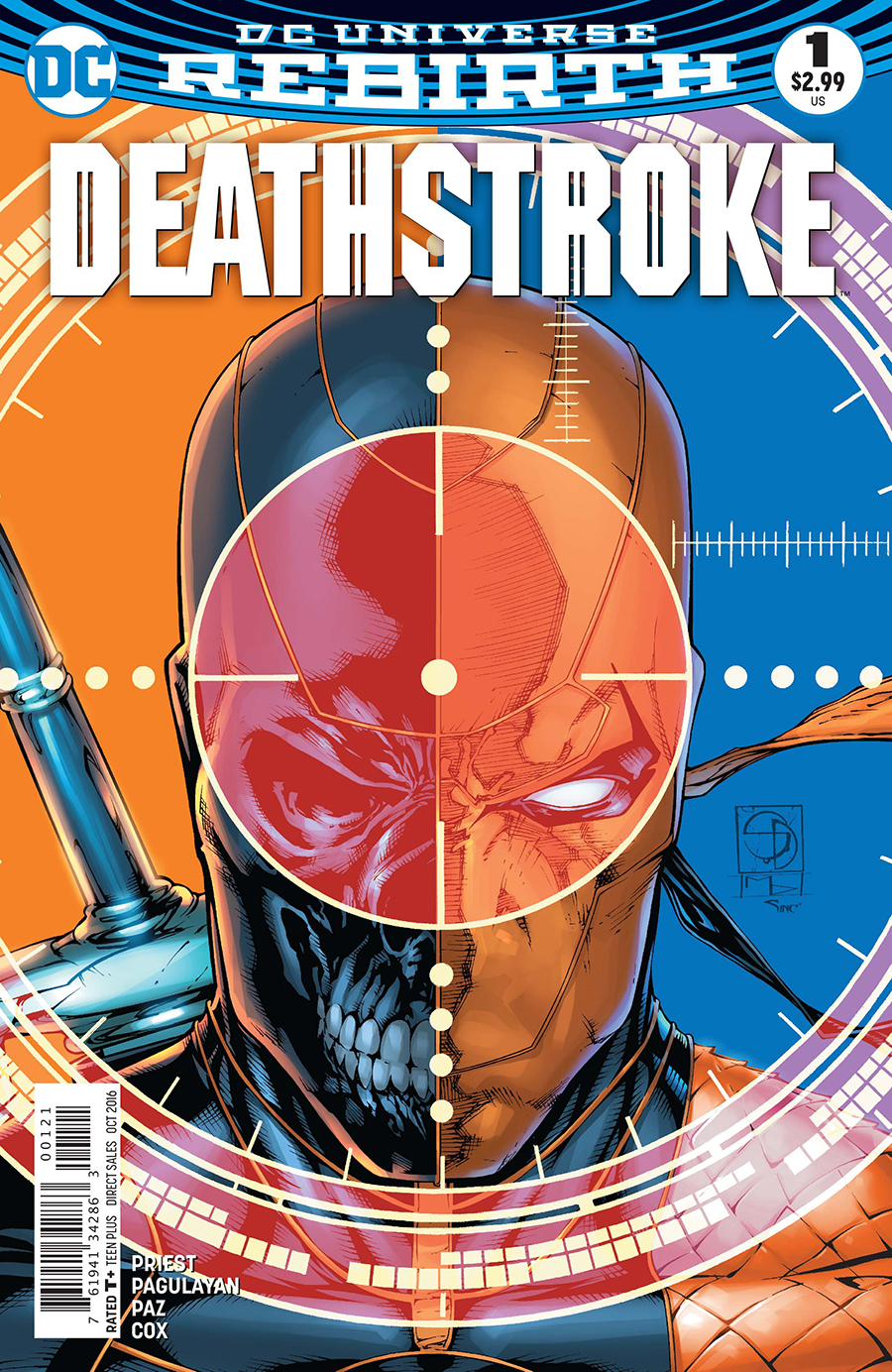 Written by Priest (the sometimes used first name of “Christopher” has been discarded in the credits) and drawn by Carlo Pagulayan, Deathstroke #1 opens with a scandalous finale for a congressman, stitching together bits of the Rebirth special into this first issue.

Part one of “The Professional,” carries on nicely from the Rebirth issue, but doesn’t require readers to dally in the nuance of the tale. There’s plenty in Deathstroke #1 to bring readers up to speed, but after reading this issue, if readers missed out on Deathstroke: Rebirth, I guarantee they’ll be making a return trip to their comic book outlet.

Deathstroke could easily be a shoot-’em-up, blood-spraying-like-no-tomorrow, explosions-in-every-panel comic book starring a one-note, growling character, but Priest sets out to give readers a story about a bastard of a guy who is so darn compelling despite being such a jerk. It also happens that Deathstroke is more than capable of killing every character he happens across, but Priest focuses more on the character of the man than his accessories or arsenal.

There is such a long game at play here, but that never keeps Priest from delivering on character development, relationship building, and storytelling, as this issue brings a beginning, middle, and end, all while setting up both Slade Wilson’s and Deathstroke’s current position and balancing those against his past.

White text on black panels serve as roadmarkers or chapter headings along the way throughout this issue, doubling as a respite for readers for the transitions between scenes, and even time. Letterer Willie Schubert prescribes a utilitarian presentation for those panels that emphasizes the seriousness of the endeavors in these pages.

The rest of the letterer’s work throughout Deathstroke #1 is solid and, frequently traditional, but those chapter headings really help mark events for the readers. Schubert employs a nice variety in the conversations contained in word balloons, and when Adeline growls “Jackass.” at Slade, readers can almost assuredly feel it.

The art is absolutely spectacular. I’ve been a big fan of Pagulayan since I first encountered him on Agents of Atlas and then on Hulk. His knack for detail explains so many of Priest’s storytelling choices and rewards the gambles Priest takes. Many comic book artists do not favor motorcycles, but after seeing Slade and Wintergreen haul out of a cave on a motorcycle with exquisite detail, writers are going to be tracking Pagulayan down for biker bar scenes. Jason Paz’s inks are nothing short of noteworthy, helping cement the characters into the scenes while delivering the depth and detail Pagulayan puts on the page.

Jeromy Cox runs the gamut with colors, from drab quarters where Clock King and Deathstroke face off to the alarming orange that covers half of Slade’s costumed face. Everything is grounded in realistic colors, but Cox accepts the fact that nothing has to stay muddy, especially with Deathstroke wearing orange and navy blue while fighting against a maniac in green and bright blue. All of the visuals congeal nicely, making Deathstroke #1 appear as though it could easily make the transition from comic to screen.

Except Priest isn’t writing this as an intellectual property or a movie pitch. Priest is giving readers the best darn Deathstroke #1 comic book we could ever want. In doing so, Priest practically puts on a clinic in Deathstroke #1. For his fellow creators and generations to come.

He begins stacking up the building blocks for issues to come, be it next month or next year, but he doesn’t do that at the expense of Deathstroke #1. This issue is a grand example of what can be done with the Rebirth effort and the character of Deathstroke, and Priest has converted me into a regular reader of this series.