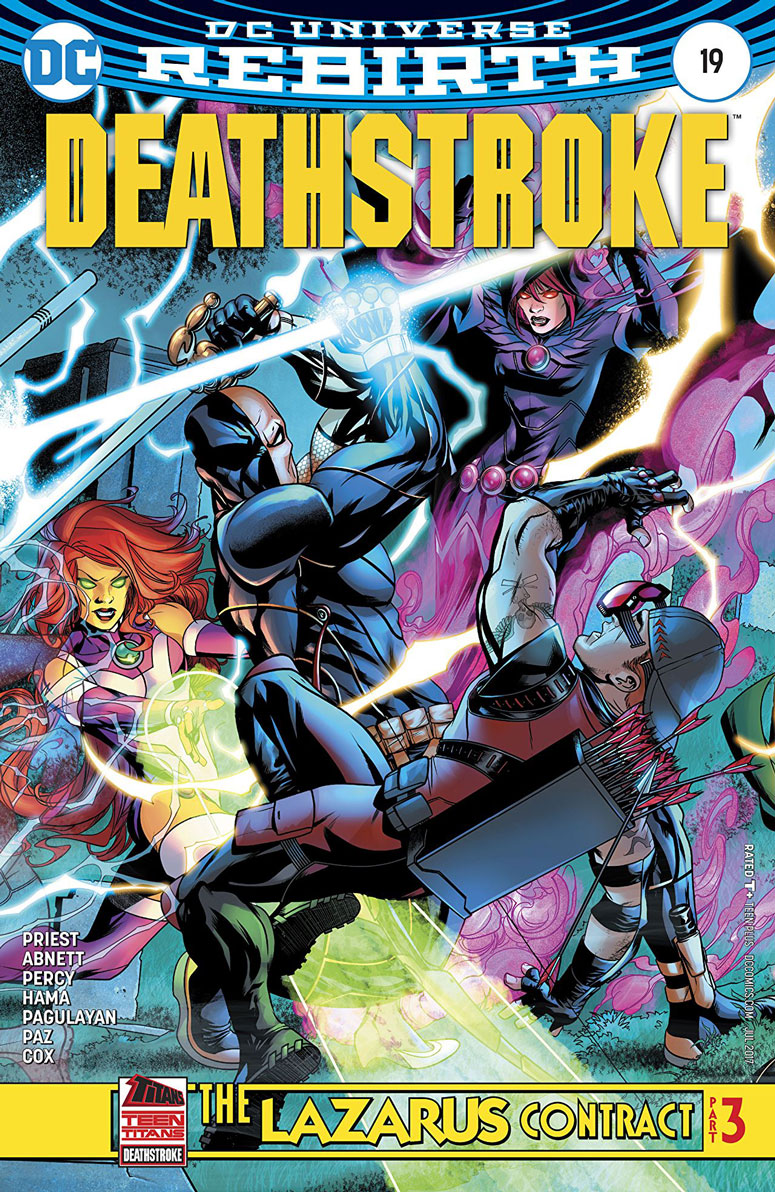 Slade has Wally shook and two teams of Titans are pulling together the straying threads in Slade’s plan. As young Wally comes to terms with his role in the current machinations, Wally appeals to a force of hope for the Wilson family. Slade makes one final visit to someone he loves before running to hold someone he wished to see again.

The narrative tone in this issue both works and has some particular mismatches with its preceding chapters. Within the crossover, each of the individual installments works for their series and that makes sense. What sticks out, particularly in Deathstroke, is Priest’s penchant for dense and thoroughly thought provoking plot.

Benjamin Percy and Dan Abnett have helped craft the crossover, but there is no mistaking Priest’s hand in the specific goings-on of this issue. This style stands at odds with the other parts of The Lazarus Contract, which have some lightness to them comparatively, making its most current installment feel as though it could be another story altogether.

While the tone may not flow seamlessly through each part of the larger story, it does still work on its own. In fact, seeing how this story plays out, with its structure and themes, makes me wonder what the crossover would look and feel like if each part was done just as this issue has been.

Even though disparate, the execution of this chapter mirrors Slade’s anguish and desperation to be reunited with his family. He wants to salvage his children’s lives and his relationship with him by any means, and this over-arching feeling colors every panel in this issue.

Priest’s handling of interpersonal relationships is evident through the gripping conversations between the story’s key players. To this effect, Slade and Grant’s tenuous interaction illuminates the complicated relationship between a father and son, looking at the often damaging way that parent and child influence each other, particularly among men. Grant is fed up with his life and with Slade who challenges him with that age-old and toxic adage of manhood in the face of confronting your father.

This is a conversation I’ve seen many times in black families, again among men and their sons, and it’s hard to shake the harmful ramifications of such exchanges and their role in developing emotionally stunted people who pride themselves on their masculinity.

This exchange between father and son also underscores Slade’s own motivations for the story. In his past, he was beyond abrasive with his children, a part of himself that influenced their own trials. Though he hasn’t fully discarded this demeanor, it does not betray his love for his children and his regret for helping to shape what they became.

All these realities come to a head as he embraces his oldest son in the final page of the issue, a masterful exposure of the main thesis of the crossover, as well as Slade’s efforts to right things for his children in the hopes of healing something within himself.

Each layer of illustration contributes to each beat of somber emotionality. Carlo Pagulayan and Roberto J. Viacava working together on pencils create characters who are largely nondescript. Form takes precedence, allowing the environment to create the baseline for dank feelings.

Detail is most apparent in vital scenes: Slade and an older Wally’s ‘race,’; young Wally’s guilt at being used; Dick and Slade’s momentous encounter; Grant and Slade’s confrontation; and, most of all, Slade’s embrace of his long-dead son. Saving the most intimate details for these scenes capitalizes on their power and why they are the important marks in the story.

Jason Paz and Sean Parsons team up on inks, and I love that they aren’t afraid to weigh things down. So much of this story is murky; Paz and Parsons touch on each critical moment, emboldening lines around characters and nearly blending them with shadow.

There are only a couple of spots where the inkers go light, both involving Jericho and Rose, and these images are a stark comparison to Slade’s plan and history while also drawing upon the hope that the younger Wilson children embody despite their pasts. These deliberate touches more firmly establish a story that needs to be about the raw and emotional depths that exist in all kinds of relationships.

Jeromy Cox on colors shows that brightness does not always mean optimism. Rather, the most vivid scenes in this issue seem to highlight the complicated nature fear and loss. Cox makes speedster scenes feel frantic, leaving the slower scenes to be wrought with despair. The very last page, with its deep red background plays on a number of emotions, bringing attention to Slade’s heart wrenching existence.

Deathstroke #19 gives readers a lot to chew on. In each piece of the issue, from story and script to pencils, inks, colors, and letters, is a new element to contemplate. I like that this chapter of “The Lazarus Contract” challenges me to think about these characters, their continuity, and how all of these parts relate to the real world. Not only is this story one which is filled to the brim with the intricacies of emotion, but it is one which helps us peer into the regret that can bind us to the decisions we wish we could change, too.