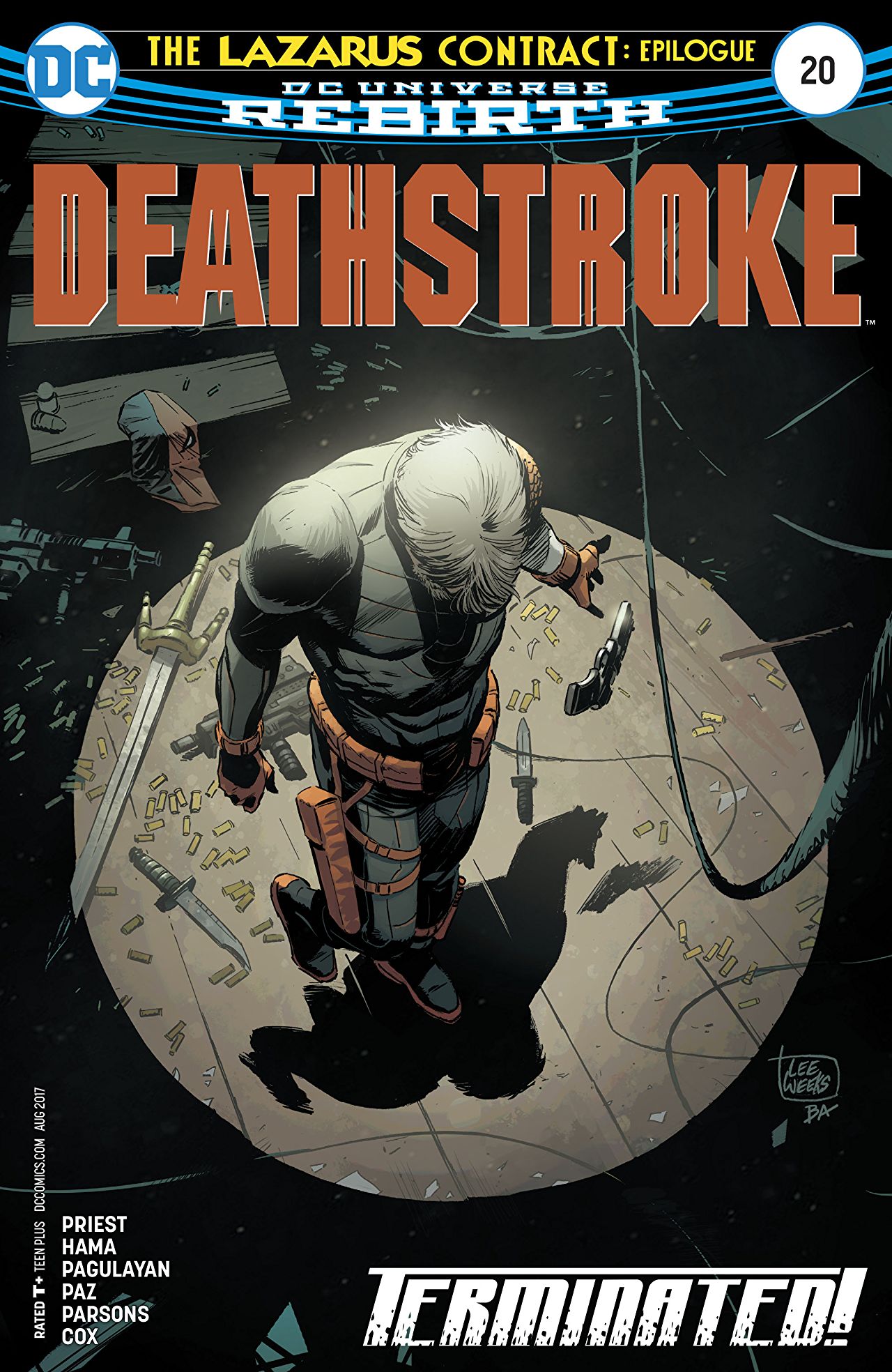 The “Lazarus Contract” has left Slade Wilson a changed man. A man not seeking death and destruction, but seeking his repentance and begins rebuilding his life … for himself and those around him.

Coming out of “Lazarus Contract,” Slade has finally stopped to smell the roses and breathe in the air that is life. Coming out of the Speed Force, Slade has a new lease on the world and seems to be taking it seriously.

The opening captions tell us through failure, he’s gone through a rebirth of sorts and potentially has seen what’s to come akin to Batman and Flash in the recent crossover “The Button”. Priest continues to chart unexpected and surprising journeys for everyone involved, in this case we’re getting into the mind of Dr. Isherwood with religious undertones in store.

We go back to the moment where Deathstroke and Wintergreen were saved by a lone sniper in Serbia, which inadvertently tied their fates together. It’s a reveal that’s not dwelled upon by Priest because Isherwood more pressing matters to worry about, given his recent journey and fall from grace.

Helping Deathstroke by creating the Ikon Suit not only entrenched Isherwood into his world more than he already was when he saved his life in Serbia but it displayed his brand of heroism as well. In retrospect and deep down, Isherwood knows that Slade Wilson is not a good person. He’s good through certain lenses and to specific circles but a man that terminates people on a whim or a bounty is not good company to keep for very long. Priest writes Isherwood with heartbreaking tragedy as he recaps what’s become of his life and it’s not pretty.

When it comes to the art on Deathstroke, you have to break down a piece together each individual part because does the art team give it their all on every page. Cox’s colors take you through the highs and lows and accompanies the mood wherever the script is taken. Slade taking in the sun shifts to the late afternoon cooler colors as the panels go into a flashback.

There are a wide array of colors at work throughout from the always present orange and black to Paz and Parsons inks doubling down on the darkness of Dr. Isherwood and his new form thanks to Deathstroke’s DNA.

The other segments of the issue focus on a truly new(?) Slade Wilson. Visual cues like dressing in white, signifying his newfound purity and dedication to his cause lends to his case of going back in trying to rectify situations and his relationships with those he’d wronged in recent arcs … starting with Tanya Spears aka Power Girl.

As seen throughout his run on Slade, Priest can write just about any character as a fully formed, intellectual human being. It makes Deathstroke as a whole a more technical and complex read than most titles because the dialogue snaps and pops as characters bounce off one another, cutting to the chase and the hearts of the matter. Pagulayan’s pencils deliver on making sure no one person looks like the other. Each character has a distinct feel and air about them that shows the diverse cast of characters at play.

An event changes the course of the series that are involved that much we know. “The Lazarus Contract” not only deepens and highlights aspects and characters in Slade Wilson’s world it may have very well gave Deathstroke a very interesting and controversial rebirth.

Deathstroke #20 sticks to its guns and treats the characters we’ve gotten to know with dignity, continuing to evolve them into new and uncharted territory with the World’s Deadliest (Reformed) Assassin leading the way. A tale of sins, washing them away, and dealing with the mistakes of your past is all you need to know about Deathstroke. Because after years of breaking bad, Slade could turn his negatives into a positive and that makes for an interesting comic to say the least.