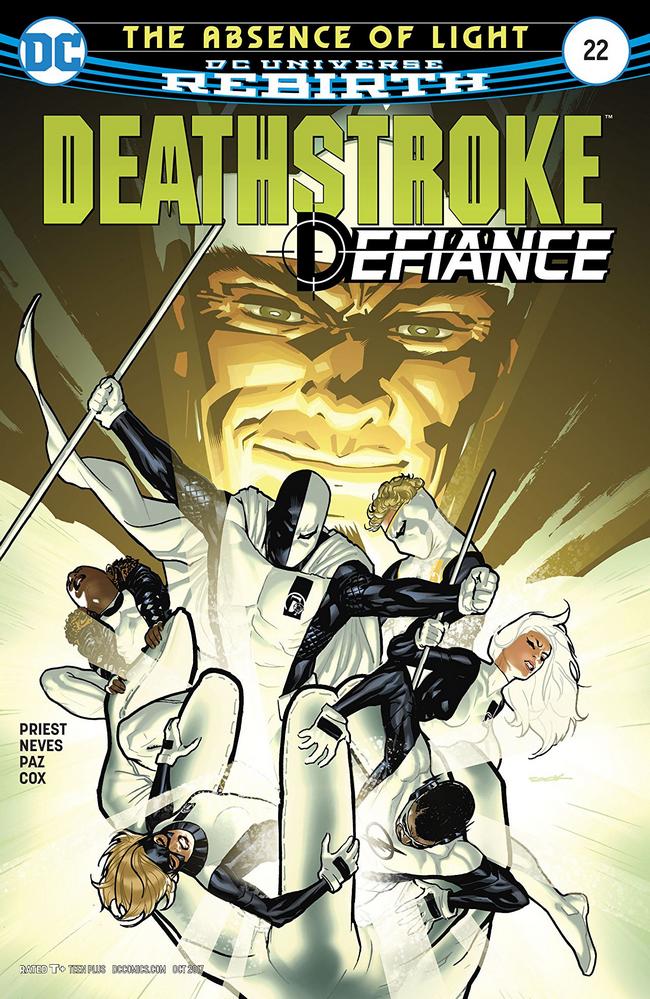 The new age for Deathstroke continues to unfold as the second chapter of Defiance establishes the team and their very first mission, with no time to breathe as the Radiant Man is here to protect the borders of Chetland United Atlantic Islands!

Priest immediately puts the teen team to work to fight Radiant Man and it’s a pure spectacle of each character’s talents. Neves pencils coupled with Paz and Cox’s subtle but worthy inking allow for the team to not get lost in the explosions in their black and white Ikon suits. Priest keeps the team of Titans at their peak with their analysis and deconstruction of their enemy mid-battle. Everyone maintains their own individuality and voice through the chaos and Priest give us clashes that show this team has a long way to go in order to gel as a unit and that goes double for Deathstroke who leaves them to handle the threat in order to deal with an old friend, in the form of Dr. Light.

Deathstroke stakes out on his own adventure by infiltrating Dr. Light’s base and the two quests are linked because of the threat and the scientific nature that Priest presents is cool, grounding the book as much as possible. We focus on both as Deathstroke and his team as two separate plots that parallel quite nicely when you see how Slade sits back to have a conversation with Dr. Light while his newly created team has a fight for their lives elsewhere. Black and white is becoming something of a running theme in terms of the themes shown and character designs. Slade and Dr. Light have a revealing conversation about themselves in the Rebirth landscape. Doctor Light is more or less on borrowed time as a shadow of his former self and Slade continues his newfound lease on life with his old hang ups (involving money, he’s not a communist). Paz and Cox do great job of outlining the characters through the backgrounds as they conversate and the colors of the costumes are defined, even leading into the battle sequences with the Titan team.

Kid Flash and Power Girl have abilities that show afterimages and Neves shows the size and body shifting in their own specific colors showing the versatility and styles at play in comparison to Rose and Jericho who are more normalized in the face of battle. Priest gradually let’s his Titans step up to the plate and Jericho steps up in a major way as a strategist and leader when Slade isn’t around. Schubert’s letters litter the issue in all shapes and sizes throughout the fighting and every instance of the bombastic sounds are needed. Things are on the up and up for the new Heroes until a curveball is thrown at them but, Terra finally makes herself known to her teammates in a rather smug introduction that shows this version of the characters has a hard boiled edge to her. Slade’s mission is all but done with and he leaves Dr. Light’s side with some words of advice that could prove to get Light off the bench and into the game again, but for now…Defiance saved the day and even gets paid for a job well done.

Deathstroke’s new era has one mission under it’s belt and as beginnings go, it’s a well done start! Priest can do no wrong with his team of young people and continues to turn over a new leaf and it’s a take on Slade I hope to see continued because Priest ushers in the old teachings of Slade Wilson and shifts them to more heroic standards while staying true to getting the job done his way. The art team on Deathstroke is perfect for the title, displaying the characters with their own style and the range of the characters that we get from a police officers, civilians, to an entire team of teens decked in black and white gives the title a bit of everything you could ask for in a political superhero thriller such as this. Deathstroke may have turned over a new leaf as he combats superheroing but his title has maintained a level of consistency that gives this title an impressive track record for being a quality read.