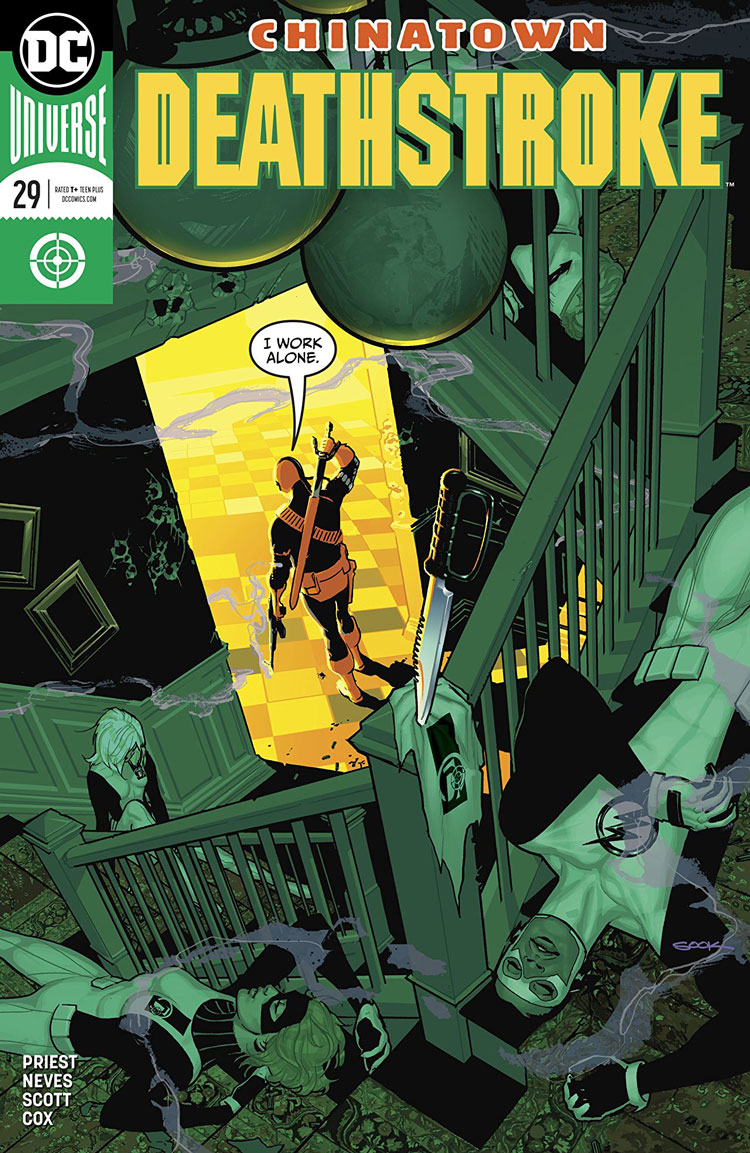 The finale to all that has come before for the World’s Deadliest Assassin is here and nothing will ever be the same for the Wilson Family as Priest brings all of the threads together for an unforgettable finale to the story that he started in issue #1.

Deathstroke and Team Defiance have grown together, lived together, and just as quickly disbanded under the weight of their own secret and lies. Preceded by an cold open of Slade at his lowest and most naked point yet in the run, Priest establishes the hanging threads and characters that are on immediate crash course with Slade Wilson. The colors from Cox illuminate the first page, working alongside Neves to establish, panel by panel, the literal stripping down of Slade Wilson as he finds himself at a loss with the law.

We’re then going backwards in time to a recent focal point for Rose Wilson and the answer she has for her brother Jericho — its own can of worms for the two. The characters and their past relationships with each other have been the crux of Priest’s run on Deathstroke and it all comes to a head here.

In the present, the deteriorating Chinatown Battle gets complicated as Terra joins the fight with emotions running high and chaos running rampant as Neves, Scott, and Cox make sense of it all. Neves’s pencils lay out the quiet before, during, and after the storm with Slade being attacked from all sides. Neves channels emotionally powerful scenes with Terra and Priest’s script hitting home equally so.

Terra’s relationship with Slade has been a rocky one to say the least and with Slade being his emotional-less self and only focused on the mission in Chinatown, Terra has a reason to join the ensuing fight and add to the insanity. As the action hits hard and fast, Neves, Scott and Cox are amazing here with the art of the battle and capturing all the characters amidst the Schubert lettering. Scott goes light on the inking to have Cox’s colors be the true star of the show. Neves packs a lot into the pages with the panels being off and sporadic as the action. The lettering from Schubert appears as diverse as the cast from the explosions. The continued snark from A.I. Wintergreen is a treat as he acts like a demented form of conscience for Slade throughout the battle.

Priest leaves no stone unturned with the “Defiance” finale and the handling of different plotlines he’s written throughout his run. Rose and Jericho’s subplot (and the uncertainty of Rose’s newfound situation) comes into the light with connections to “The Lazarus Contract” to thank for that, adding more context and a more thorough mark on the crossover than we previously saw. The sins of Deathstroke’s past actions have officially come to roost and the fall of the titular character has been lined up by Priest at every turn, like dominos falling in place.

Neves gets to play with a slew of characters new and old with Cox’s colors leading the charge with the guest stars and the action-packed panels being nonstop. Neves has fun with the impact of punches and blasts with a super-team stacked to take on Slade once and for all, each person representing a different problem or issue that Priest has brought up against Deathstroke over the past twenty eight issues.

The finale to “Defiance” happens not with a bang, but a finely tuned and disturbing twist that calls the recent batch of issues into question. It all lines up the reasoning for Slade’s newfound location — and what happens next for the Wilson Family is anyone’s guess! Deathstroke has been a consistent treat for long-time readers and the culminating story of his fall has been a intricate special type of adventure that has made Deathstroke one of the best titles in the era of DC Rebirth.

This issue has the fall of Slade Wilson — which has honestly been a long time coming. It’s a complete masterful finale that paves the way for the next phase of Deathstroke’s adventures, while closing arcs worth of stories on the World’s Deadliest Assassin and his development from Bad Guy, to Good Guy, to something in between? Deathstroke is a shining jewel of a title and the consistency with Priest’s voice on this cast of characters, with the art capturing everything from the human moments to the dynamic action scenes, will always leave you wanting more.