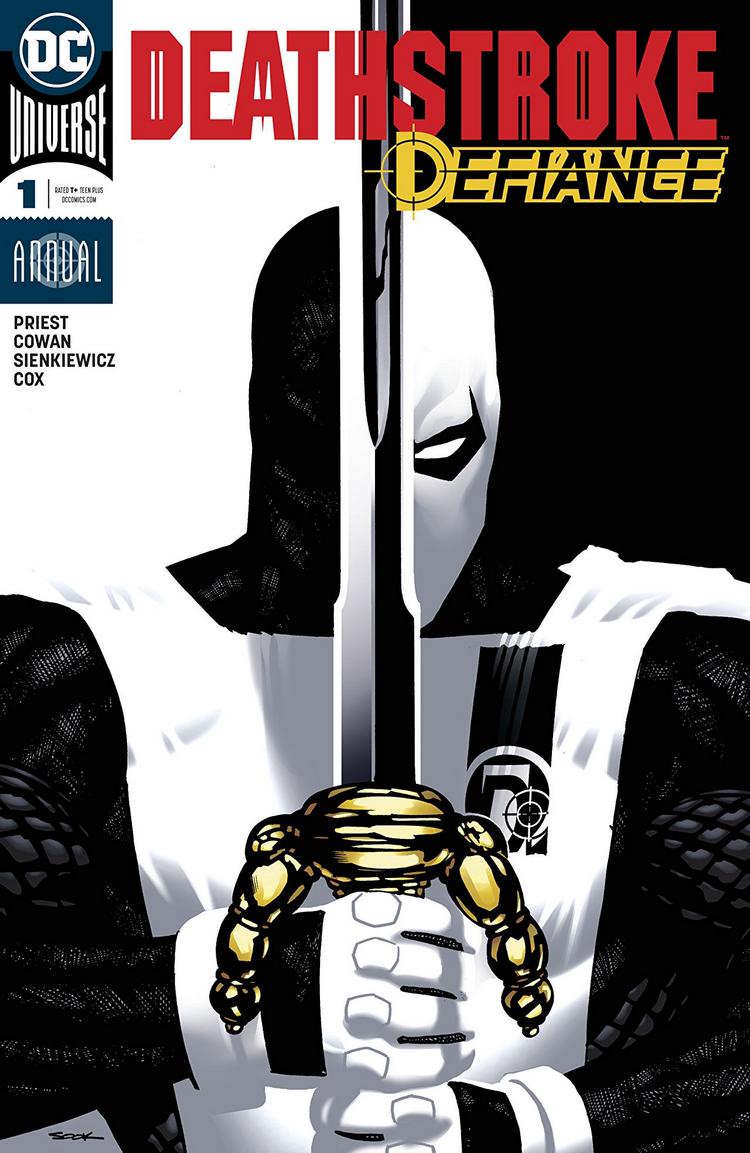 The climax of the Defiance Era of Deathstroke is here and nothing will ever be the same. This annual is everything we’ve received in the Deathstroke series thus far and increases it tenfold as the emotions run high between everyone in Slade Wilson’s world. Ever since issue 21 of Deathstroke, we’ve gotten a newly christened Slade Wilson with his own brand of justice. Priest has made this rebirthed Slade, a man trying his hardest to stick with his heel turn and it hasn’t been without its fair share of challenges. From the Secret Society of Supervillains putting him on trial for his turn to the good side, the past literally grabbing him by the neck in the form of Dr. Ikon, and friends and enemies alike all having their own agendas that keep the wheels turning of this Annual into surprising developments throughout!

The character of focus at times is our Power Girl aka Tanya with problems both superheroic and personal. Outside of immediate family she’s the one that Slade spent time with, being a guest star of sorts in the previous arc “Twilight” and Priest sets her character for an interesting path early on in the book that could leave Tanya in a new direction all together down the line. Priest balances this team of killers, misfits, heroes, and things in between with moments that wouldn’t be out of place in a workplace drama. Relationships and complications are the backbone of this comic series and this annual puts the interactions and history of Team Defiance and all of their issues to the forefront and it’s a sight to behold as the castle comes crashing down.

Cowan’s pencils are perfect for the inking from Sienkiewicz. The inking is all over the panels and Cowan’s pencils have the characters more loose and rough around the edges but they are specific enough to let you identify with the cast of characters that pop up. From afar, the characters appear darker and less outlined but Cowan does the work for up, close, and personal dialogue heavy bits and added with Priest’s writing it all comes together. The expressions might not be the best but the movements and how the characters are setup from panel to panel follows the dialogue well. The coloring from Cox ranges and accentuates the backgrounds the characters are set in, with Cowan not focusing on the backgrounds, the characters stand out more and the coloring matches every one.

The Annual does everything to recount it’s history with the title with caption boxes galore as different events are recalled upon. Priest uses all of these different events as dominos for the Annual and it’s emotionally impactful as characters react to revelations and surprises. The characters are all dealing with different events and it’s coming together in a beautiful way. Everyone in Defiance is written with their own identity, personality, and are growing in surprising ways. Priest writes the characters in ways that put their super powered lives on the back burner and explore them as people. Tanya is becoming unhinged as the life she’s built for herself comes undone and falls on the bad side of another team member in a more humane, more topical conversation about people’s ideologies and lifestyles come into play. Wally is having a crisis of heroic allegiances and this is all before we focus on the main man Deathstroke!

Deathstroke continues to do what he does best given his new role as a non-killer and wittingly sets up murder which is parts dark and comedic as he’s come to be known throughout Priest’s run. Schubert’s lettering continues to be easily at it’s best with how A.I. Wintergreen heckling and commentary on Slade’s plans and the nature of how he’s left things in the wake of his new policy. Even the writing for an artificial intelligence is written to snarky and intelligent delights amidst the action that Cowan’s directs with the unrefined, yet also compact pencils that leave room for the Sienkiewicz heavy inking and Cox colors to explode in an unbashful display of action that lends to the chaotic and more concept art direction that the art takes in as a fight of technical prowess and timing ensues.

What’s to follow are creeping moments that result in some character moments, which are game-changing and Priest doesn’t dwell on one in particular and that’s quite possibly the point. It was always second nature and bound to happen and with not even a blink, things begin to crash down around this team. At this point in the Annual, a character makes a choice that seals the fate of the team and it’s hard-hitting, impactful to its core, and changes the game but saying anything else would be a spoiler.

Deathstroke Annual is a necessary chapter in the downfall of Team Defiance, an illustrated example of “The more things change, the more they stay the same”, and hopefully the beginning of a new era for Deathstroke. This Annual is Priest remaining at his best with not giving larger than life Superhero Epics but, intricate character pieces that are more about the journey than the destination. With its rough around the edges, chaos infused art from Cowan that revels in the darkness and grit of the material that is well-acquainted with Sienkiewicz inking and the mainstay of Cox’s colors lighting the way. With this Annual we’ve gotten a Deathstroke Tale that serves as a key chapter of Priest’s run on the character, his family, and progression on some DC Heroes that you simply wouldn’t get anywhere else. The action has meaning, the characters are diverse and have their own unique issues, and the ramifications…no matter what they may be have an effect.

Deathstroke has another home run with this one.