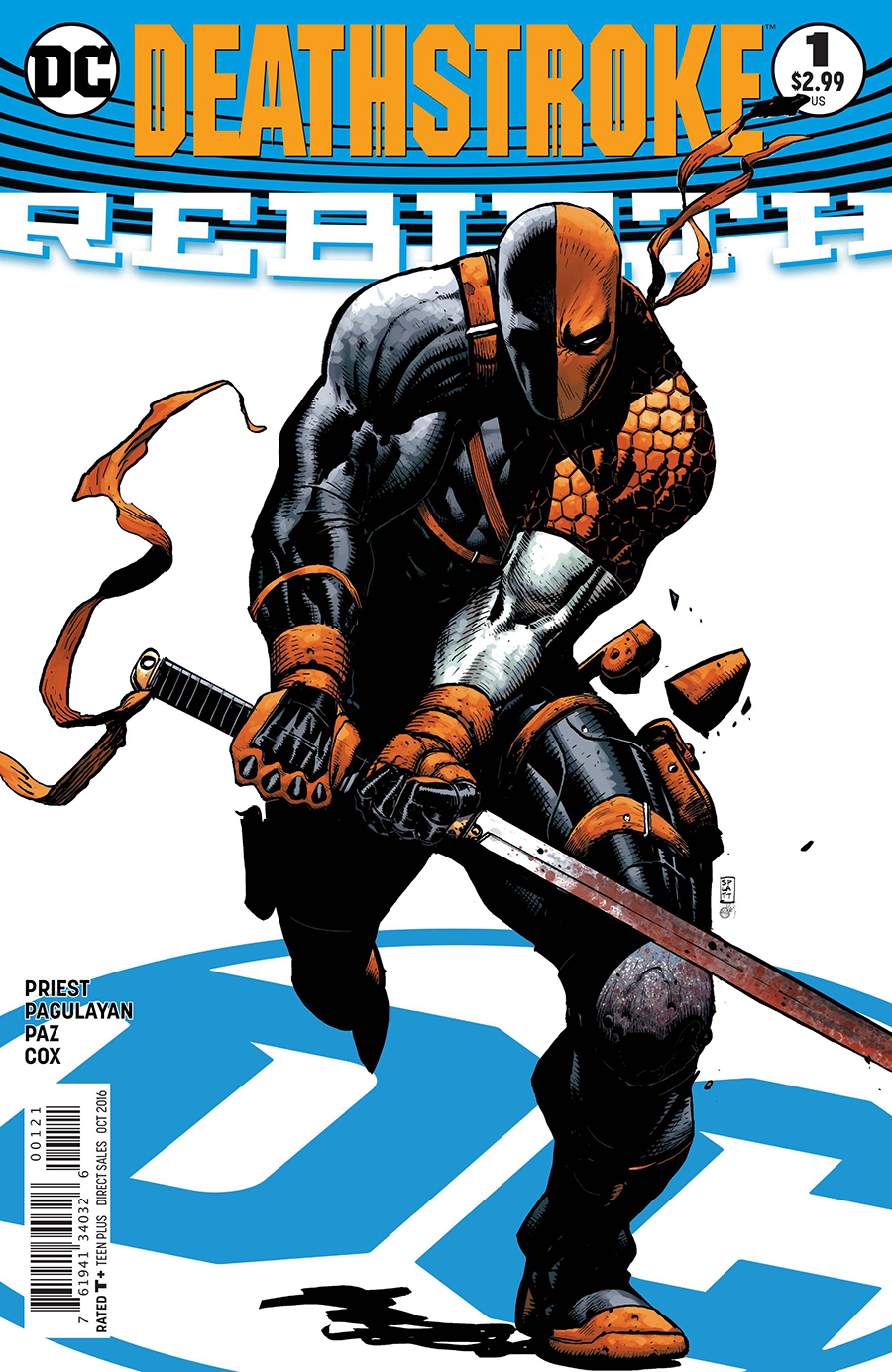 Slade Wilson is the Deathstroke: a contract killer who always honors his commitments — by the letter if not the spirit. He’s a terrible father — by all rights a sociopath. But he’s a brilliant strategist, physically ageless and comparable to metahuman, and above all else, a man of principles. They’re just not very heroic principles.

Christopher Priest was away from comics for FAR too long.

Returning to the four-color fold without missing a beat, Priest has once again engaged a figure of some mystery and neglect with Deathstroke: Rebirth, giving us a narrative completely not beholden to past continuity and mistakes. Goodbye anti-hero. Good night Teen Titans ally. Farewell one thousand pouches skritched onto twelve layers of armor.

And hello, deep-seeded mystery we all get to unravel together now, with political intrigue and familial drama peppering every page.

And yet, Priest’s introductory tale is hardly short on machismo, particularly as we witness Slade berate and nearly beat his preteen son right before gunning down a bear and its cubs. This is hardly Ward Cleaver over here, and yet we get this trickle of dysfunction in the perfect killing machine that seems to be showing us something deeper than just worshiping the almighty contract.

There’s a crack in the veneer.

With a narrative that flips back and forth in time between Slade’s early days as a father to his middle aged years as the most dangerous man on Earth, Priest is rounding out Slade Wilson pretty quickly. We get allusions to his origin, his family connections, the scope of his business, and his relative disregard to the fallout of his decisions. It takes a hard man to watch as the dead are pushed aside by the dozens in the mouth of a construction vehicle.

Pagulayan mimics the structure Priest has used time and time again for pacing, these characteristic black cue cards accenting shifts from one time period to another. But the real beauty in the artist’s work comes in his rendering of Deathstroke’s confrontation with his target, the dreaded Clock King. Heh.

But naturally, Priest plays the encounter straight, with the Clock King being given the weight under Pagulayan’s pencils and Paz’s inks of being worthy of Deathstroke’s attention. That final gaze Clock King gives Slade, moments before the assassin prepares to throw a de-pinned grenade, bores right through me — and thus through Deathstroke — as we soon learn there are some things more compelling than the honor of a contract. But is it love or revenge?

By the end of the Deathstroke: Rebirth one-shot, I’ve been left intrigued, but also well satisfied by the value of the prologue. So many of these specials have left me cold or wanting so much more story weight, but Deathstroke may very well stand out as the very best of them to date. So as “The Professional” rolls on this month and in those that follow, I’ll definitely be along for the new ride. Priest and Pagulayan have unequivocally won me over.