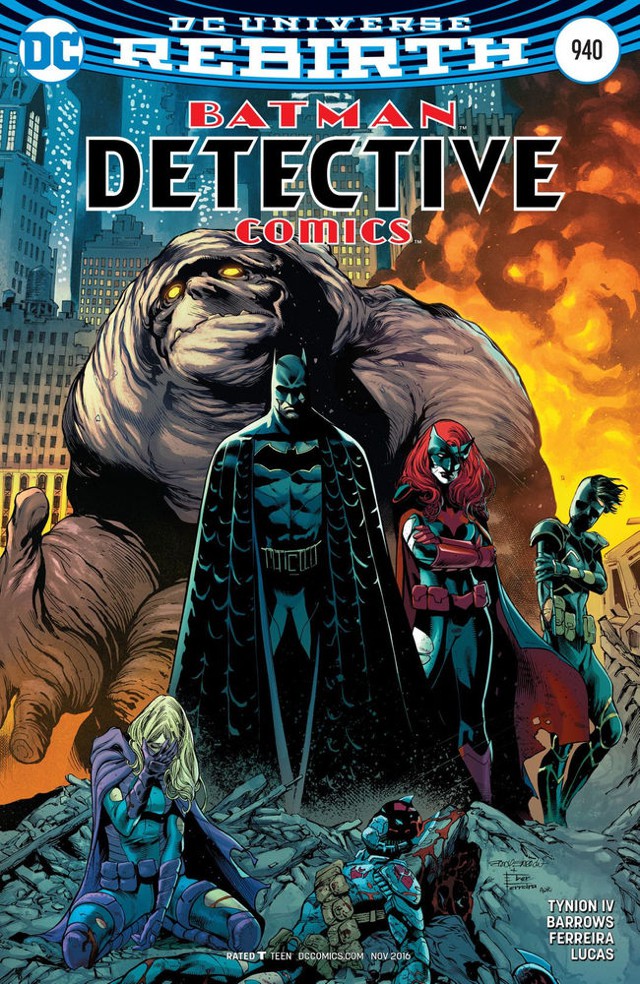 Spoilers abound in the review below. They may be vague, but they are spoilery.

Working from the premise “Every comic is someone’s first comic” Detective Comics #940 is going to be a very disappointing debut. Or maybe not. Writer James Tynion and artists Eddy Barrows (pencils), Eber Ferreira (inks), Adriano Lucas (colors), and Marilyn Patrizio (letters) pack so much action into this issue that it wouldn’t at all be a misnomer if this comic and Superman’s debut series swapped titles for this issue. Or maybe even longer.

Part seven of the “Rise of the Batmen” story, Detective Comics #940 opens with a heated confrontation between Batwoman and her father, Colonel Jacob Kane. As the finishing move in his confrontation with Batman’s team, the Colonel has set an attack in motion that puts one of the Batman Family in the center of hundreds of crosshairs. So Batwoman gives him holy hell in a magnificent beatdown.

That character in the crosshairs is Red Robin – Tim Drake, and Tynion makes it spectacularly clear just how beloved the young Robin is. That steps into the metaphysical aspect of comic book reading, as readers can almost surely project themselves into the comic, be it as Tim, Batman, Stephanie, or another character reacting to the events as they unfold.

Tynion’s tale is visually telegraphed by Eddy Barrows with ink from Eber Ferreira who sinks the deep, dark shadows of Gotham even deeper throughout Barrows’ work. Barrows essentially bookends this story, which is magnificent, but this issue makes it quite evident to me that I never realized just how awesome a Batman artist Barrows is. With Batman, the trick is to craft a believable world around him, but to soak it in shadows, chisel it from rock, and gild it with technology. Barrows does every bit of that and goes farther, giving Batwoman as much panel presence as Batman, and packing the rest of the supporting cast with rich emotion.

Adriano Lucas turns in career-defining color work in Detective Comics #940. The caped crusaders have flecks and planes that emerge from the shadowy embrace Barrows and Ferreira have crafted, and those colors tell a tale all their own. The icy blue tones that open the issue shift to electric blue then to blazing red as the second wave of drones descends on Red Robin following Batwoman’s confrontation with the elder Kane. When the grief hits the panels of Detective Comics #940, Lucas breaks out the purples. Purple is indicative of royalty, but it also blends the warmth of red’s passion with the chill of blue’s sadness.

Wordless panels after a gut-wrenching scene tell the story best as Tynion entrusts the tale to Barrows, who does not disappoint. Lucas’s colors capture and inform the readers’ feelings, blending them into the characters’.

It’s a heartbreaking tale to be sure. Detective Comics #940 is an exclamation point on a story that has redefined Gotham City and so many of the members of the Batman Family. Tynion, Barrows, Ferreira, Lucas, and Patrizio close off a fast-paced story with a world-changing finale. Then they take it a step further and tack on an epilogue that shakes up the entire post-Rebirth DC Universe. Things started out great with this title, and Tynion and crew have continued to raise the bar. I cannot wait to see how they follow up on this one.