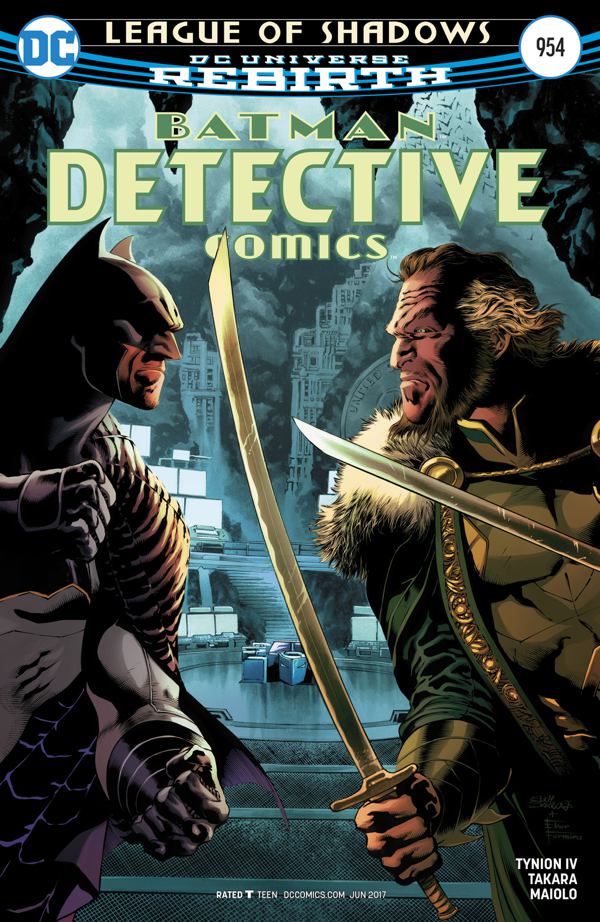 The League of Shadows arc continues as a familiar face comes to Gotham and everything gets messier for the Bat-fam.

Batman and Ra’s Al Ghul are always entertaining when they share a page and Detective Comics #954 is no exception. There is a lot going on in this one, but from the outset there is a ton of energy in this issue. The arc is moving along briskly, it is action packed and the stakes are high, so some pages with Bruce & Ra’s talking things out works very nicely. Tynion nails the dialogue between the pair, and while I will admit the transition between Christian Duce’s work and Marcio Takara’s is somewhat jarring to the eyes, Takara gets the job done in this sequence for the most part.

The thickening of this plot moves at a great clip, with readers getting pummelled with information & plot swerves as this story progresses. The rapid changes feels right for this story as Gotham is under siege and completely off balance, as are members of the Bat-family. Tynion brings the issue’s story to a close nicely, with one hell of a cliffhanger that will impress Cass fans and got me really excited to read the next issue. Cass’ role as the anchor of this arc that is so huge in scope is executed very well and I applaud how Tynion has integrated these characters and given each their “own” story in his run of Detective Comics to this point.

Overall, I was impressed with how he paced this chapter, often times middle of the arc issues in a bi-weekly book can feel thin, but Tynion’s writing moves this arc along well while never feeling like filler.

Marcio Takara’s work is a mixed bag, with several pages and panels simply feeling rushed. The issue has points, such as the cliffhanger, that nail the tone and frantic energy of what is occurring, but the issue as a whole does have a feeling of a rushed effort to get a bi-weekly, particularly where inking is concerned. Several panels are inked with such thick lines that it looks like there simply wasn’t time to pencil in definition or detail, and Marcelo Maiolo’s colour work has to work heavily to pull it all together. That’s not to say this issue is a complete mess, the story gets told and there are pages that are just fine, they happen to be undermined by the rushed work is the sad reality of the situation.

Detective Comics #954 moves this arc along at a brisk pace and has me hooked on this storyline despite some shaky art. The final page is a great cliffhanger to launch into the next issue with and I am very happy I only have to wait two weeks for it. This is the kind of grand story that this team of Bat-heavyweights deserves and I look forward to what Tynion and company throw at readers next.