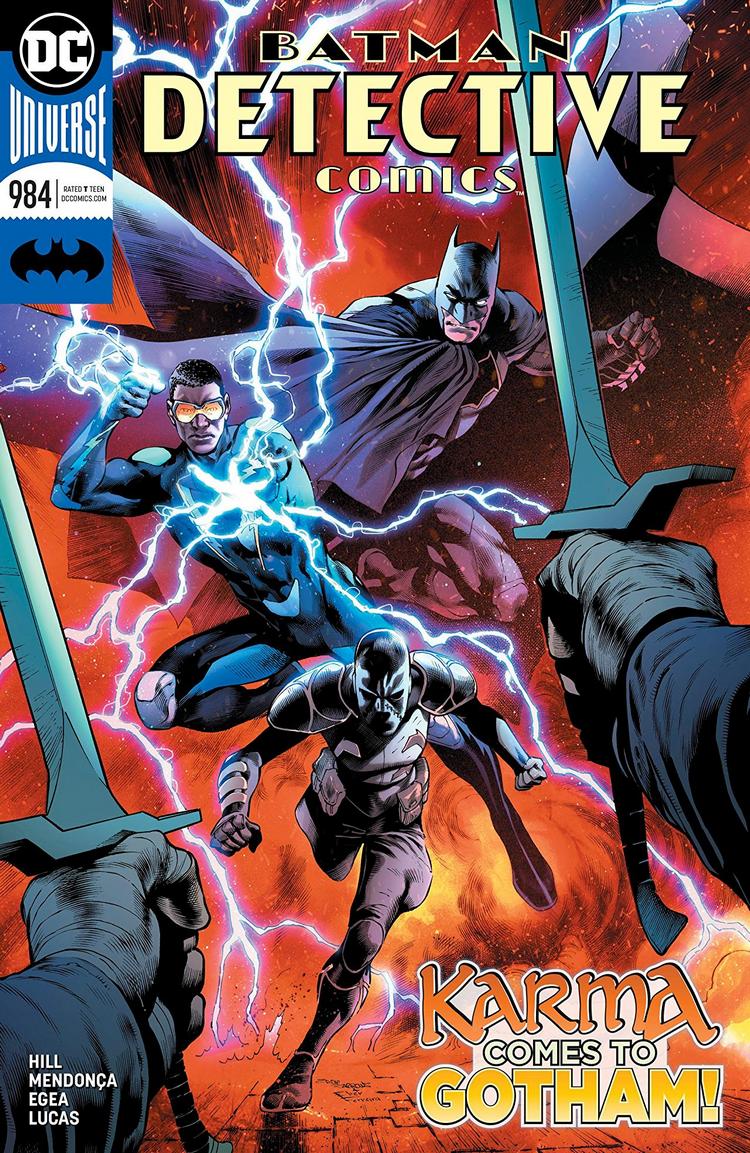 Karma is making his mark on Gotham and it’s going to take something new and outside the law to stop him.

Part Two of “On The Outside” centers our Heroes solely against the threat and continues to show how Batman is thinking outside the box for this past meets present threat in this action-heavy issue. Picking up right after the attack on Cassandra’s life, Hill and the art team get down to business as a fight ensues and Mendonça sells every corner of it. The beginning page of the comic relays more ties to an Outsider’s location and the darkness from Egea’s inks provide a bigger contrast from the fight that takes up most of the issue and filters in and out of Batman’s new tactics featuring Black Lightning. The background layout of the streets is a part of the battle landscape just as the characters are. Hill hits the ground running with the battle between Karma and Cassandra, sprinkling some further development with Karma in the process of the fight.

Mendonça plays with the angling of the two characters in the process of the fight with Lucas’s colors being solidified and helps define the characters as they rush through panels. The action drawn inside window panels let’s more of Cass’s prowess for combat be shown and the type of a threat the team is facing. Mendonça focuses Karma as a central or larger figure on the pages and splinters Cass around him to show the breakdown and strength between them. Karma is still an enigma to us but the signs are all pointing to a figure that has specific to an Outsiders tinted past and Hill makes him stick out with everything from his helmet, to the word balloons being partially gray from Cipriano.

Elsewhere, Batman and Black Lightning continue the reestablishment of their relationship and Batman is really stressing the importance behind needing something different from what he’s used to with the inclusion of Black Lightning here. Jefferson is being measured up by Batman to see what kind of teacher he can be for the new generation and Hill writes Jefferson as a more compassionate teacher that is more hands-on with students, given his background than Batman. Jefferson is unsure of his newfound situation and makes it known that this is out of his comfort zone but there’s a warming up sense to the idea when it’s time for action. Hill never delves too deep into one set character as most of the action comes together when Black Lightning and Batman arrive to help Cass and it’s a display by both Heroes and the Villian that prove why this run has some meat on its bones and demands something different from the cast. The lettering from Cipriano is varied from the punches, jabs, and kicks to the electrifying powers of Black Lightning, coloring from Lucas included. Karma is a new (possibly old?) threat that’s giving the Heroes a run for their money. The coloring is vibrant and fitting for the night time brawl and as the issue ends at Wayne Manor, there’s one last segment that we’re treated to as we see the nature of the relationship of Black Lightning and Batman take a turn.

Black Lightning realizes some truths about Batman and it’s here Hill makes the clear-cut difference between the two characters that want what’s best but go about it in different ways. This arc is about trying new things and Batman being humbled by a villain from his past is just the reason for Batman to step back and let someone with a different approach than the norm step up and lead people in his life. Hill ends the issue with the seeds for a new team to take on Karma and there is a real sense of tension and drama afoot with who and why is on the team and why they’re perfect for it. It’s emotion and characters that have baggage or are damaged in a way that Black Lightning has to grapple with so as far as the immediate future for the arc goes, Black Lightning is going to have a trying time with the new generation that is in the Batman corner of the universe.

This Detective Comics run continues to be the unique antidote to a typical Batman story and pulls on underutilized characters and begins to take shape as a run that recognizes the past but gives us something new and different. Including Black Lightning gives Batman a new partner-in-crime to bounce off of and with the heart of the matter being about the new generation of Superheroes maybe needing a shakeup of their own with their experiences and own emotions, Hill is making everything click with this run. Mendonça on pencils are clear-cut and can go from straightforward to action-packed when it needs to with Egea’s inking reinforcing points of impact and darker moments. The colors from Lucas are sound and fit each character and never distract from what’s going on as the story continues. Detective Comics is crafting an arc to look out for with “On The Outside” and it keeps up the pace with part two.