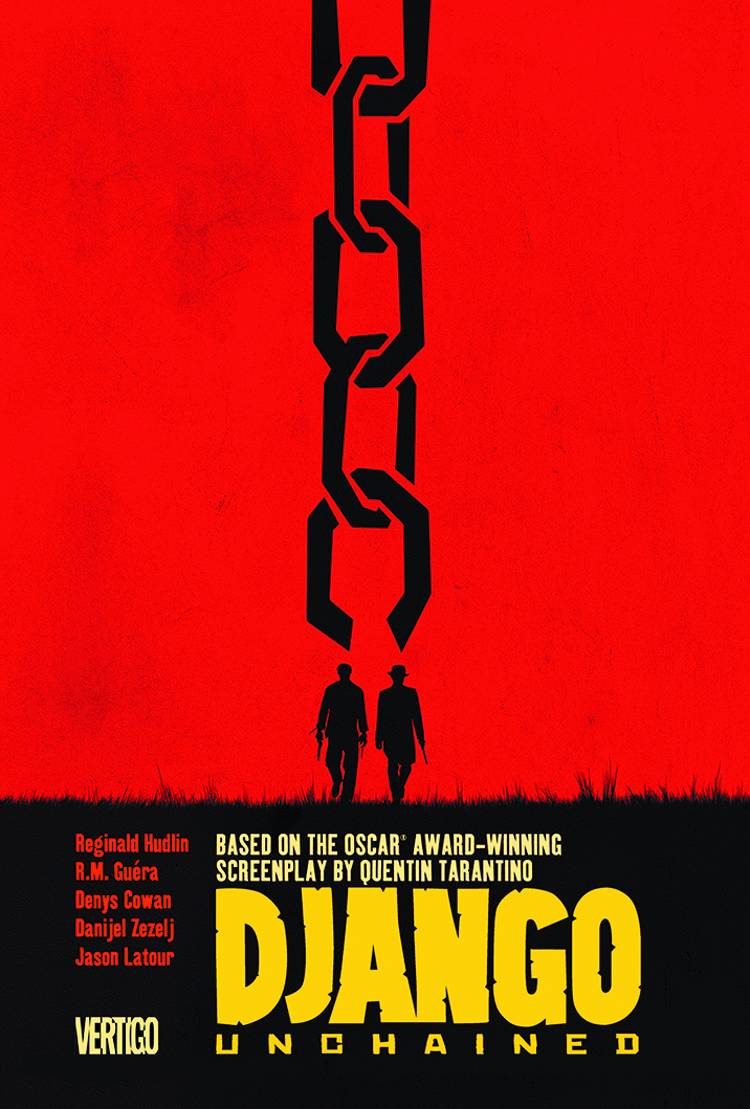 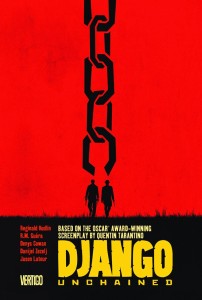 Film adaptations in comic book form are really tricky endeavors. In most cases, I’d argue they’re not worth doing, as they always seem to fall somewhat flat. Where they don’t, it’s almost always because there’s an echo present from the experience of the film itself that the reader is bringing to the book — infusing it with a liveliness that’s not actually on the page, but re-activated by the memory of the movie. And when so much of a film relies on comedic timing, solid delivery by accomplished actors, and less on the plot itself, it gets even more difficult to produce an adaptation that has legs of its own. For it to be worth it, there’s got to be an overriding reason for the attempt.

For Django Unchained, that reason is the unedited script being transcribed to the page. This is a version of the film that never even got filmed — never even saw itself into the actors’ hands. A genuine first draft, there’s a lot of familiar elements here for those fans of Tarantino’s latest masterpiece (and I do believe the film itself to be a masterpiece), and a lot of things that were left out — for good or ill. It’s an interesting premise around which to base a comic series and if this script was as different from the ultimate film as Dark Horse’s The Star Wars comic series was from the movie it spawned, it might be a fascinating artifact. Unfortunately, the effect here is not so dramatic. Tarantino either had an amazingly good sense of what Django was meant to be from the very start, or the “first draft” nature of this story is a little exaggerated. We’re mostly getting the same story that appeared on screen with some significant flourishes added (for instance, an entire sequence detailing Hildi’s fate between being sold and arriving at Candyland).

Four different artists work their way through this volume, all of whom capture a strong sense of the actors and scenes being portrayed. The problem is essentially the mix. Guera is probably the most straightforward of the bunch, giving a classic Western comic feel to the pages he produces. La Tour’s gorgeous interludes portrayed in monochromatics, echoing back either legend or times past, are well defined and don’t break up the flow of the storytelling at all. Unfortunately, the same can’t be said for the portion of the book drawn by the modern master himself Denys Cowan, whose work is absolutely exquisite, but so out of place next to that of the other artists. It hurts the collection as a whole —which is not divided by issue, but formatted as one long graphic novel — not to have a single artistic expression throughout. On a monthly series, I understand the need for an occasional guest artist. I can’t justify it on a limited series, even if the fill-in artist is one of such high caliber.

All in all, the Django Unchained collection is a mixed message, just different enough from the film to warrant curiosity, and just pretty enough to want to turn through its pages, but not dramatic enough to stand on its own as a piece of literature. What’s missing is the actors’ delivery, the charm of their smiles and the glow in their eyes. Because of this lack, I can’t imagine it living up to the celluloid in any way beyond satisfying a super-fan’s completion complex.

And then again, it’s nearly impossible for me to say what the experience of this book would be for a reader completely unfamiliar with Tarantino’s on screen version. Perhaps if the artists had not drawn each character to so closely resemble the actors (as this claims to be a draft that never made it to a read table) or the elements of the German mythology were played up more (a surprisingly lovely, if small, part of the collection here), this story would stand on its own more. By keeping so close to a work that just can’t be captured so precisely on the two-dimensional page, Django Unchained loses some of its exceptional luster.