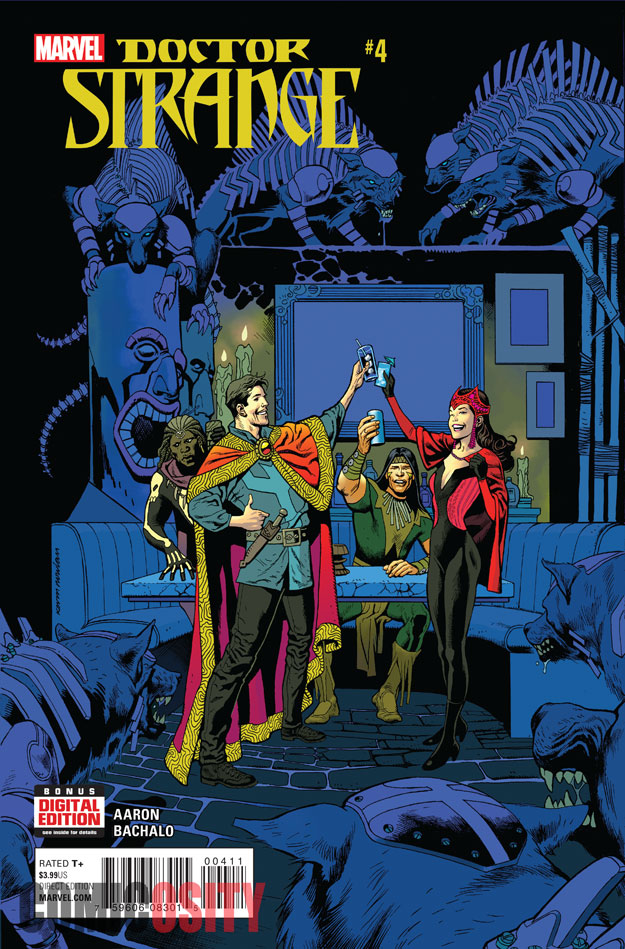 It’s a magical menagerie of Marvel’s mystics and magicians!

Stephen Strange is getting closer to unraveling the magical disturbance affecting him, New York, and the entire mystical world. Things are darker than they appear, as Zelma unearths a disturbing development in the library. Stephen sets off to follow his latest lead, only to be met with a surprising threat he is not fully prepared for.

At this point in the All-New All-Different era of Marvel, earlier wave titles like Doctor Strange are getting to a point where we really see the stories edge closer to their climax. The events of the preceding three issues were strange, and we are beginning to see why. This issue showcased Stephen at a couple of very distinct points in his development as the mystical Doctor, providing an interesting backdrop to the plot. Things are looking very grim, and I think that’s going to bring out the best in Stephen.

Jason Aaron’s Stephen Strange is the silent protector, his words imposing an uncertain serenity no matter the circumstance. What I love about Stephen is his knack for minimizing the gravity of any situation, even the most dire, in order to assuage others’ fears and maintain a sense of reason. He strikes me as someone who has a soothing voice. Aaron’s writing brings this important element out of Stephen, showcasing the power of his more human qualities: his compassion and his desire to protect.

Let’s get right down to it: the art team deftly conveys the arcane atmosphere of Doctor Strange #4. The previous issues were a bit more darkly whimsical, but this issue plunges Stephen into a mystical darkness. The first few pages, defined by a dismal grayscale with very minute touches of color, exemplify the skills of this team in illustrating Stephen’s world. This brief scene feels desolate and empty, powerful feelings conveyed alongside a narratively integral point in the issue.

With minimal exposure to Stephen Strange prior to reading this series, Doctor Strange #4 contains elements I find vital to his character. There’s magic and mystery, but also Stephen as a very human man enmeshed in a world beyond most humans’ comprehension. As the book is reaching the climax of its first arc, I think it will be a great series for anyone who wants to jump into Doctor Strange as a character, typically before the movie releases later this year.