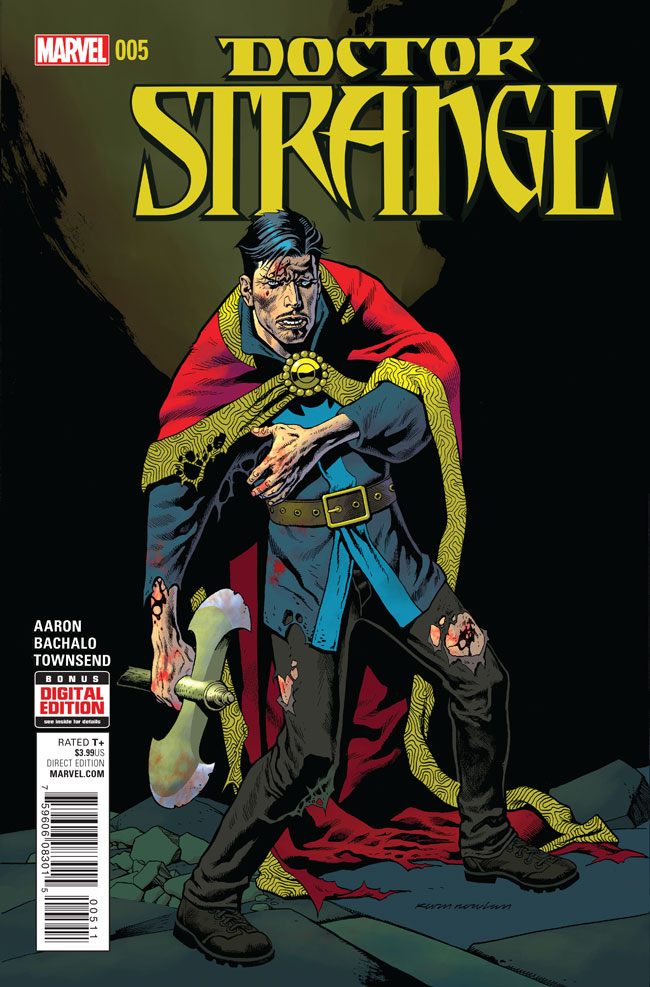 When you’re Sorcerer Supreme, even New York style pizza may not do the trick.

As the world of magic crumbles around him, Stephen recounts the costs of his abilities. Drawing upon whatever mystical arts he can, he expels the oncoming threat, himself paying the toll of significant magic. Things may not be truly over, though, as Stephen seems to dread the coming onslaught and all that it entails.

Doctor Strange has been building to something big since its first issue. Magic as Stephen knows it is degrading, and many powerful beings are being destroyed. This issues reaches a culmination of this magical problem as Stephen makes a bold move to reverse it. By the end of the issue, there’s no telling where things will go for the 616 Sorcerer Supreme. This story seems to have a pretty major effect in the context of other series, which I hope means that there will be larger ramifications in the Marvel universe. Doctor Strange #5 reminds me of those little clues throughout stories that point to a larger conflict, and I hope that the events of this solo series lead to some big problems and bigger stories.

Jason Aaron writes a Stephen that is ready to face dire circumstances, but who still has a sense of humor. There are some small quips that are a nice touch to this issue, somewhat separating Stephen from the serious atmosphere of the current arc. Aaron’s use of Wong in the story pushed the character beyond the silent guardian role as Stephen’s butler. It was nice to see Wong take more action, even if challenging, in order to protect Stephen and magic as a whole.

To describe Chris Bachalo’s art in Doctor Strange #5: soul wrenching. The images are dark, dense, with arcane and monstrous elements woven around the panels and into their surrounding blank spaces. From the flashback to the main story, this issue felt incredibly dismal. Considering the circumstances, Bachalo is in great form, showcasing the dire straits of Stephen’s situation. The use of gray and more earthy tones were a wonderful touch, essentially muting the story, creating a visual sense of unease.

Each of the inkers enhances the dark and somber mood of this issue, as many of the pages seem steeped in shadow. This team of inkers’ skills help to further enmesh Doctor Strange #5 into an environment that is dark, scary, and filled to the brim of the things of our nightmares.

Doctor Strange #5 was the type of issue that shows why the series should not be completely insular. Magic has had a major effect on the Marvel universe, and this issue shows why you can’t just leave it alone within the confines of one series. Stephen’s situation has grown increasingly critical with every issue, and #5 shows that he is up against something that is going to threaten him, his abilities, and his world. The growing apprehension of Doctor Strange is one of its selling points, and it looks as though we will get a conflict that Stephen will have to resolve without his abilities or his connection to mystical realms. For a trip into horror and the arcane, pick up this issue.