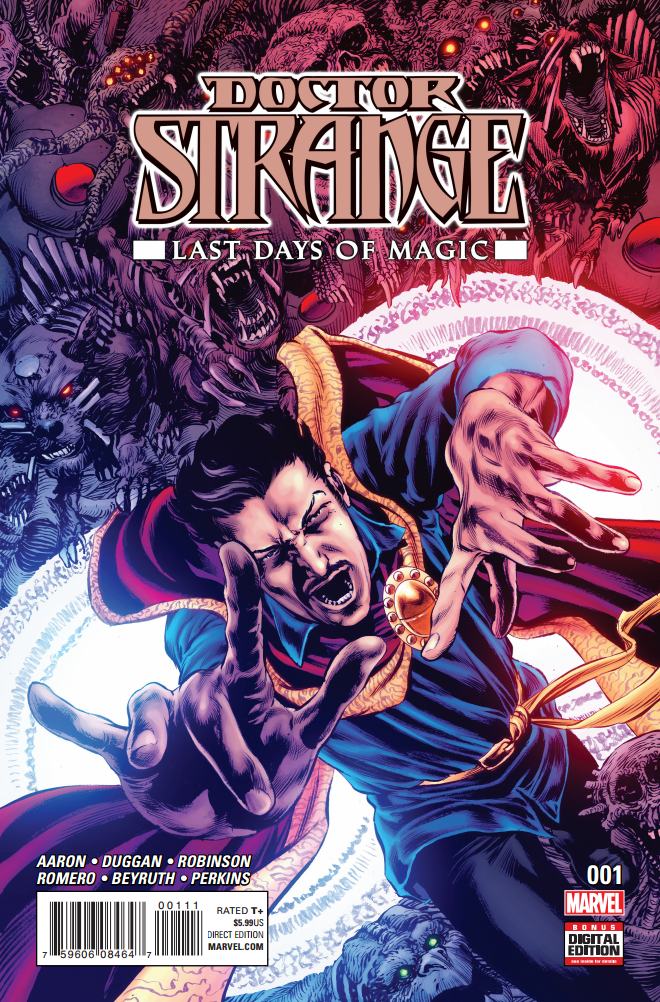 With the Empirikul bearing down on Stephen Strange in the Sorcerer Supreme’s main title, regular series writer Jason Aaron enlists some collaborators to give readers a 45-page special that adds depth to several of the bits and pieces that readers have seen so far in the early stages of the “Last Days of Magic” storyline. The end result is a fun read, with Strange’s new human ally, Zelma Stanton, acting as our tour guide throughout the world of magic.

Doctor Strange: Last Days of Magic #1 is composed of three stories, each fifteen pages long and all seamlessly woven together through the eyes and assessment of Stanton as she attempts to organize Strange’s mystical tomes. Drawn by Leonardo Romero and colored by Jordie Bellaire, that tale functions as a framing sequence throughout the book, giving readers insight to characters that have recently popped up in Doctor Strange, such as El Medico Mistico, Mahatma Doom, Count Kaoz and Professor Xu. Reminiscent of Chris Samnee’s work, and equally augmented by Bellaire’s colors, Romero’s art is sleek and smooth, his figures are open and his backgrounds are smartly detailed. This, combined with Bellaire’s meticulous color choices and powerful light and shadow effects gives Strange’s library and the spots around the world where we find the various mystics lavish visual description, making it possible to truly believe in the magic and the characters wielding it throughout this issue.

The Empirikul have come to Earth, seeking to wipe out magic as they have done in other dimensions. The army of eyeball warriors and their witchfinder wolves encounter a storm of sharks, among other mystical enchantments, giving readers plenty to marvel at throughout this comic.

Doctor Strange: Last Days of Magic #1 has two longer features that each dial in on one single mage as they fight the Empirikul. Writer Gerry Duggan is afforded a chance to explore Doctor Voodoo beyond the shared panels of Uncanny Avengers, and he does a GREAT job with the character. As a self-contained story, this chapter takes a reeling Voodoo back to his arsenal in New Orleans (complete with a wonderful Easter egg wink for one of Voodoo’s co-creators). Duggan uses the story to underscore many of the differences between Strange and Voodoo and the sources of their magic while emphasizing their shared passion for protecting their world. Jericho Drumm’s dialog is snappy and upbeat throughout, including my favorite line of Doctor Strange: Last Days of Magic #1: ” . . .and I don’t have time to die today.” Danilo Beyruth and colorist Dan Brown make this chapter appropriately shadowy and exaggerated, playing into the unknown aspects of the arsenal Voodoo calls upon. This action-packed chapter had me so enthused by the end of it, that I had to pause my read of the rest of the issue to look up the Doctor Voodoo series and make sure the collected edition is still in print.

The other standalone sorcerer story in Doctor Strange: Last Days of Magic #1 introduces readers to the legacy of The August Wu of the Coral Shore which is drawn by Mike Perkins and colored by Andy Troy. The story begins earlier in Strange’s career and carries into today with solid, reality-grounded artwork from Perkins that is reminiscent of classic Doctor Strange artists Paul Smith, Frank Brunner, and even Jackson Guice while maintaining a sleek, satisfying style distinguishably all Perkins. Troy colors this chapter with bold tones, like George Roussos used in the 1990s Doctor Strange, Sorcerer Supreme series. Written by James Robinson, this story gives readers a new character to enjoy, but also immediately establishes a believable legacy that also adds depth and diversity to the magical corner of the Marvel Universe.

The one sticky point that nagged at me throughout the issue is the fact that the closest we get to Victor Von Doom is Mahatma Doom, the lone survivor of a secret monastery of monks. Especially given how much Brian Michael Bendis is emphasizing Doom’s mystic abilities in Invincible Iron Man, it seems incomplete to not have him at least show up and tell Strange (or any of the other mystics) they’re doing it wrong. This special does slide in between the first and second chapters of the “Last Days of Magic” story, so maybe Doom will find a way, but t the adventure is certainly still complete without him.

More ancillary than required reading, Doctor Strange: Last Days of Magic #1 is a nice companion piece that gives the Marvel Universe more mystics while also affording Doctor Voodoo room to grow without the trappings of a team book. More than once I found myself thinking this special expands the “Last Days of Magic” story to make it not unlike “Spider-Verse”: characters are spun (no pun intended) out of an established character with plenty of potential to grow and develop. I just hope some of these new players survive the tale so readers can see what Aaron and company can do with them in further adventures.