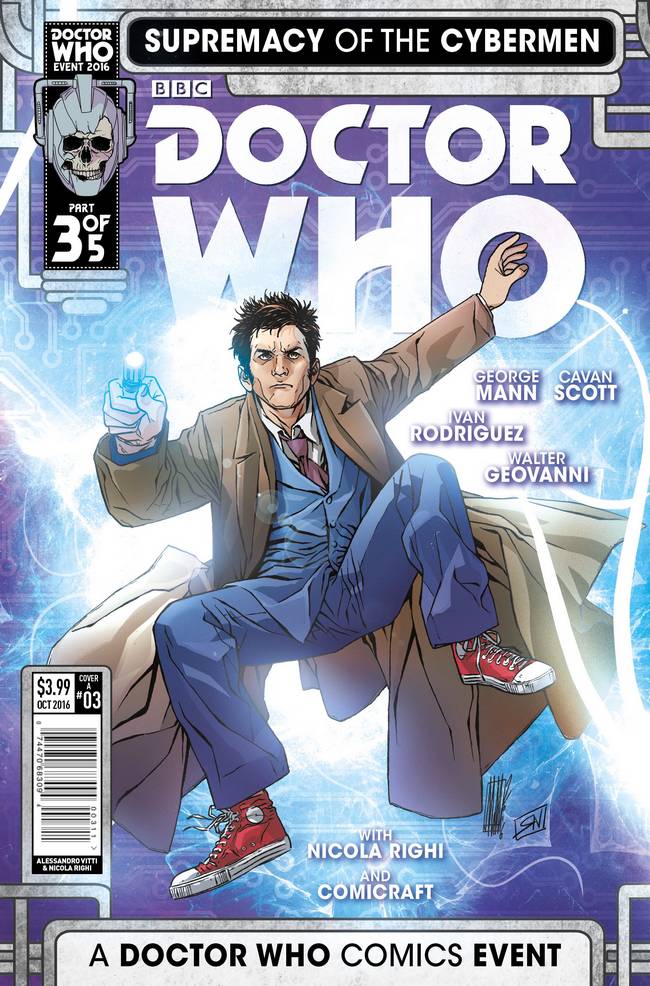 Four Doctors continue their separate adventures and dangers across time, battling the Cybermen. The buckets of emotionless bolts have found a way to invade all of time and space. Of course, this is all thanks to the deposed former President of Gallifrey, Rassilon. Don’t worry, these aren’t spoilers; just the basic plot points set up in the first issue.

It is surprising that we are already three issues into this limited series and the Doctor’s have not met up or realized they are all fighting the same foe. Of course, when you meddle with history, including the Doctor’s, he will eventually remember. Yet, is it enough? Each Doctor is facing down one of his former foes, however now they now have cybernetic enhancements. Mann and Scott have got the mood and witty phrases down for each Doctor. The dialogue fits well throughout, even if just a cursory glance. Going from setting to setting keeps any companion from delving too deep into how they are able to help the Doctor out. Of course, one of them is put into peril.

Semi-spoiler here: the best moment of this comic is when you see the creative team’s collaborative interpretation of what many different Doctors, outside the four featured in this title, are experiencing with the Cybermen. It’s chilling and fascinating to pour through each panel and juxtapose that with that Doctor’s run-ins with the big-bads.  For Cybermen fans, it creates a must read issue.

While the story is perfectly weaved for deeply invested Doctor Who fans, the art keeps all the elements from being as easily recognizable. The biggest issue is the rendering of each characters face. Regular series artist for each of the Doctors can make this a hard bar to reach. However, when it is hard to tell the difference between the Ninth Doctor and Jack Harkness, it creates a real barrier to readers. There is also a few panels that could have you mixing up Rose and her mother for a second, if you are not looking closely. The Twelfth Doctor is only recognizable because of of the color work to keep his grey locks of hair puffy. While not technically bad, there is a inconsistency from page to page that makes you think just a little bit harder about who you are reading about at that moment. Considering the various locations each Doctor is at, it shouldn’t be that hard for such a big event book.

It is disappointing when a big event comic like this, crossing the Doctor’s stories, doesn’t create a must read issue. However, that seems to be the case, so far. Perhaps part of the problem is that this chapter is all about pushing to pieces together, not leaving room for development. The barrier with the art not necessarily moving smoothly from scene to scene does not help either. However, for Doctor Who fans it is a pleasant enough read that will amuse and delight. It is especially enjoyable if you love the Cybermen or Rassilon. If you have been checking this event out, go ahead and pick this issue up. If you have not started yet,  you might want to wait for the full story in graphic novel format… or for news of any potential amazing twists in the next two installments.